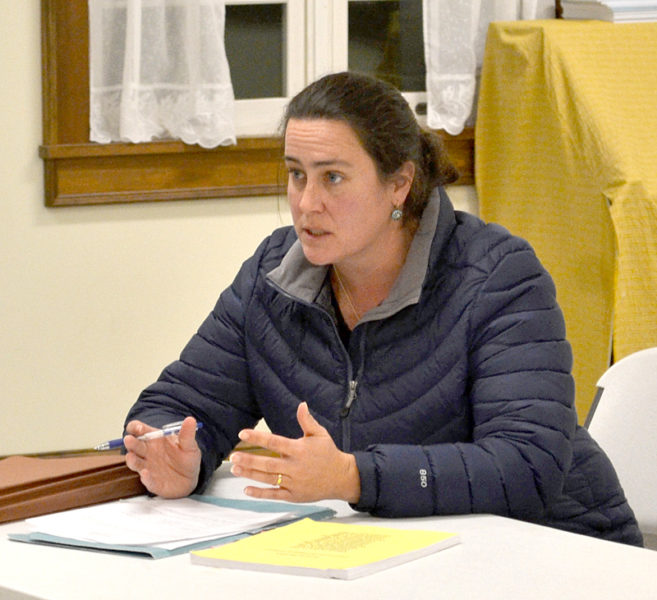 Town attorney Jessica Avery counsels the Dresden Board of Selectmen on the process of adopting a temporary ban on retail shops, clubs, and outlets for recreational marijuana during the board’s Monday, Nov. 28 meeting. (Abigail Adams photo)

“An Act to Legalize Marijuana” faces several complications, such as a ballot recount, President-elect Donald Trump’s nominee for attorney general, and uncertainty about the regulations the state will adopt to govern the law, First Selectman Dale Hinote said at the Dresden Board of Selectmen’s Monday, Nov. 28 meeting.

Despite the uncertainty, Dresden is following in the footsteps of several municipalities in Maine. Under the guidance of town attorney Jessica Avery, selectmen took the first step toward adopting a moratorium on retail marijuana shops and clubs in town by agreeing to submit a request to the planning board to consider one.

The moratorium, which would place a six-month ban on any retail marijuana shop, club, or outlet, would largely fall to the planning board, because it would require an amendment to the town’s land use ordinance, selectmen said.

The moratorium would need to follow the planning board and town process for ordinance changes, which would require a public hearing and a vote at a special town meeting, Avery said.

The earliest the moratorium could be adopted, if the town decides to move forward with it, would be in January, Avery said.

January is also when the election results would be certified and “An Act to Legalize Marijuana” would become law, if it survives the recount and Gov. Paul LePage takes the maximum amount of time allowable to certify election results, Avery said.

The six-month moratorium, however, would count retroactively to the time Dresden initiated conversation about it. Selectmen’s request to the planning board to consider a moratorium effectively places a hold on someone moving forward with a retail marijuana shop or club in town, Avery said.

Once the election results are certified, the Maine Department of Agriculture, Conservation, and Forestry will move forward with the rule-making process for the law, which could take nine months, Hinote said.

The regulations the department adopts for the recreational use of marijuana may be good and address the concerns of residents in town, Second Selectman Dwight Keene said.

If the regulations are not adequate to address residents’ concerns, the moratorium will enable the town to develop its own rules which are compatible with Dresden’s comprehensive plan and zoning requirements, Avery said.

“This gives us time to determine how to progress,” Keene said.

Selectmen pointed to the field across from the Dresden Elementary School and expressed concern that someone would buy it and open a retail marijuana outlet there.

If the Dresden Planning Board decides to move forward with a moratorium, the board would largely determine the language of it, Avery said. “I’m assuming both boards are coming from the same perspective on this,” she said.

The medical marijuana growing facility that was approved by the planning board in September would not be affected by the moratorium, Hinote said.

The ability of individuals to possess up to 2.5 ounces of marijuana, the allowable amount according to the legislation, would also not be affected, Hinote said.

While Dresden selectmen are taking steps to prepare for the legalization of marijuana, it is unclear if Question 1, the ballot initiative to adopt “An Act to Legalize Marijuana,” will maintain its narrow lead after the December recount, Hinote said.

Question 1 passed by a slim 4,073-vote margin in the Nov. 8 election, according to unofficial election results. A recount is scheduled to begin Monday, Dec. 5, according to the Secretary of State’s Office.

Several municipalities in Maine have already voted to adopt a moratorium on retail marijuana shops and clubs. The subject has also surfaced in Damariscotta, Newcastle, and Wiscasset.

The Damariscotta Board of Selectmen decided to table further discussion until after the state completes its rule-making process; Newcastle selectmen opted not to take action unless they receive a citizen’s petition; and Wiscasset selectmen tabled a planned discussion on a moratorium pending the results of the recount.

One of Dresden’s motivations for initiating the moratorium process was concern Dresden would become more attractive to individuals interested in opening a retail shop or club for recreational marijuana if surrounding communities have already imposed moratoriums, selectmen said.

Dresden voted yes on Question 1 by a 591-486 margin, according to unofficial election results.