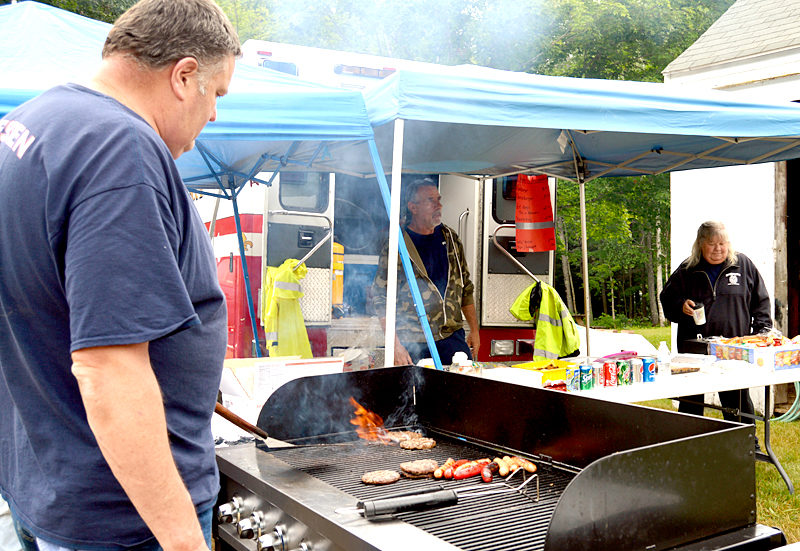 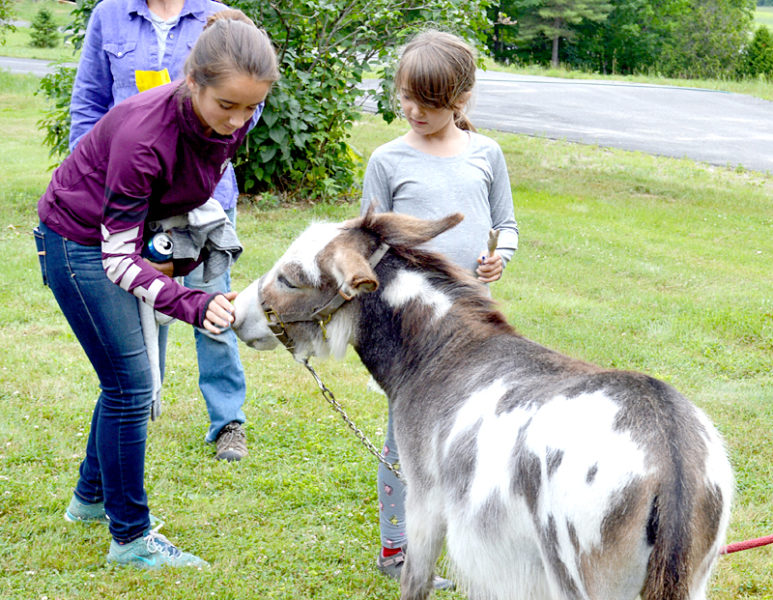 Tavin, one of two donkeys from Hideaway Farms to attend the Dresden Summerfest, enjoys attention from attendees. (Haley Bascom photo) 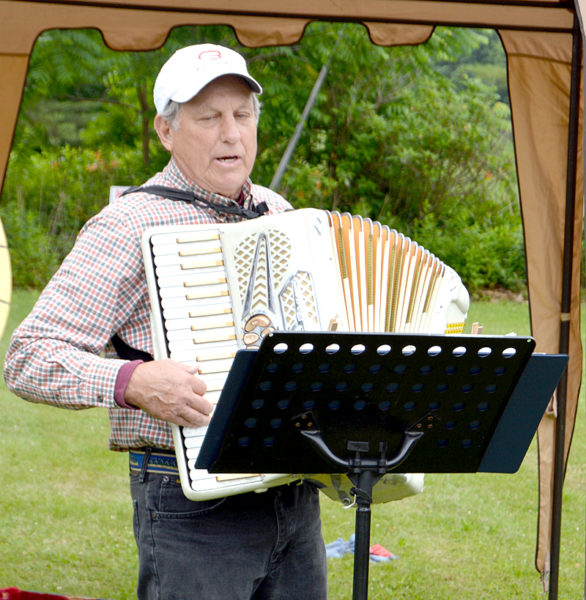 The festival was moved forward an hour to avoid the heaviest rain and moved to the front of the courthouse to avoid a new eagle’s nest behind the courthouse.

Though organizers had considered canceling the event, they decided to take on the emergency medical technician’s motto, to “adapt and overcome,” said co-organizer and Dresden resident Peter Walsh.

Attendants explored various crafters’ and business owners’ tables, with items ranging from jewelry to spices, while listening to music provided by Steamboat Gypsy Band, the Abenaki Nation Fish River Singers, and Walsh on accordion. Many also took advantage of tours of the courthouse, partly to escape the rain.

“We always wanted to do it a little bit offbeat. It’s kind of an anti-fair,” said Walsh, pointing out the lack of carnival-style rides and the presence of a horse-drawn carriage provided by Hideaway Farms, as well as the availability of nature trail tours.

Games included hula-hooping and a bean-bag toss, which seemed popular with the children.

“The kids really love it,” said one newcomer, Jamie Cook.

This was also the first year for the Abenaki Nation Fish River Singers, who provided traditional Native American dance and song. The group is mostly made up of Native Americans, though the members stress that all are welcome.

“We just ask all to keep an open mind and an open heart,” said leader and drum maker Bill Pelkey.

The Fish River Singers played throughout the day, saying they enjoyed the energy of the people and area and loved introducing their music to locals.

“Get up and dance! There’s no right way – there’s no wrong way,” said Pelkey about encouraging people to dance around them.

Attendants also got to partake in a pie contest. All proceeds went to the Richmond Area Food Pantry. Director Janette Sweem said attendees sampled each of four donated pies and placed a secret vote for their favorite. She said the bakers of the pies were locals, but would not reveal their names.

At the end of the day, the votes were tallied and the winner announced. With a cherry pie, first place went to Dresden Fire Department Treasurer Shari Lilly. She said the recipe was handed down from her mother, and that her secret this year was using a graham cracker crust.

The Dresden Fire Department sold barbecued hot dogs and hamburgers, along with drinks and snacks, to raise money for the department.

Assistant Chief Ron Theriault said he enjoys the event each year. “It gets the community together,” he said.

The Dresden Arts and Recreation Committee and the Lincoln County Historical Association organize and host the event.