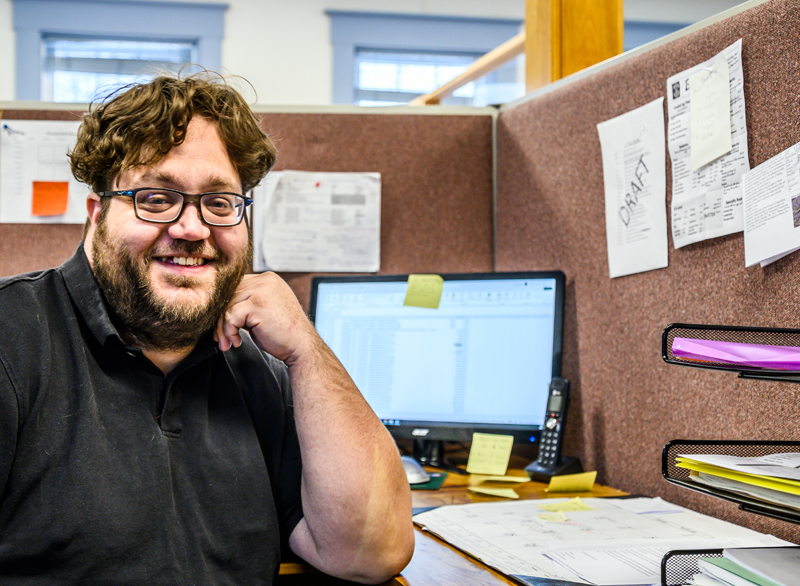 New Town Administrator Daniel Swain poses for a photo at his desk in the Dresden town office on Dec. 30. Swain has over eight years of experience from a variety of positions within municipal government. (Bisi Cameron Yee photo)

He vividly remembers a grade school field trip to the state capitol in Augusta, walking into the House chamber and seeing all the shiny gold fixtures, being enamored of “the pomp and circumstance.”

As an adult, his interest in government is more nuanced. He appreciates that the United States has three levels of government: From the president of the country to the governor of the state to the mayor or town manager of a municipality.

“Of the three, we’re the most accessible,” he said of local government.

Swain said he likes talking to people, a trait he called both a benefit and a flaw. But he believes being accessible to residents is a core principle, not just of government on a municipal level, but also of his own philosophy. And in that context of engaging in conversation is how he ensures residents’ concerns are validated, their voices heard.

Swain was born and raised in Skowhegan and attended the University of Maine at Machias studying history and public administration. He had the opportunity to intern with the Machias town manager where he “fell in love with the idea of government.”

“I realized I wanted to be a part of it,” he said.

While still in college, Swain ran as an independent for state representative for House District 32 which includes Machias. Running for office was eye-opening for him in ways he had not expected.

He said he realized what it means to live in poverty, and he noted that “people that have nothing are usually the ones who offer the most.”

After coming in fourth out of seven candidates, Swain decided to pursue appointed positions in government, although he doesn’t rule out eventually running for office again.

During and after college, Swain held jobs with companies that work with individuals with developmental disabilities, including Augusta-based non-profit Medical Care Development Inc., Portland-based behavioral health and education services organization Spurwink, and Sunrise Opportunities in Machias.

Swain said he enjoys working with people with autism and Down syndrome and helping them “live their best life every day.”

Swain moved back home after his time at Machias, and applied for municipal jobs in nearby towns. He held positions at Reed Plantation, Palermo, and Monson.

According to Swain, he honed his municipal skills over his four years as town manager, treasurer, and tax collector in Monson. “I got to do a little bit of everything,” he said.

But he was interested in new challenges. He left Monson in October 2021 and started applying to municipalities that were farther south.

One of those municipalities was Dresden.

Swain was looking for a bigger town. He wanted to work south of Skowhegan and “drive through towns that had stores and people as opposed to bogs and moose.”

He still lives in Skowhegan with his five-year-old boxer dog, Ellie. He said the best part of the hour-plus commute and sometimes the worst part is the opportunity to work through problems in his head while driving.

While Dresden has a larger population than Monson, Swain doesn’t consider the job beyond his skills. Swain said Dresden has less development currently than Monson; “there’s no downtown area.”

He already knows the job from the bottom up; he has been a member of the frontline staff at several town offices and has the skills and knowledge to “step right in and help.” And he’s overseen all the services the town offers over the course of his municipal career.

Swain was appointed town manager by the Dresden Board of Selectmen in November, replacing previous town administrator Michael Faass, whose contract was not renewed.

Swain said that for Dresden, as with all towns now, “The big question is how we manage ourselves in a COVID world? How do you open to the public and still keep the staff safe? How do you deal with the influx of people looking to escape larger urban areas?”

Swain said with homes being sold as fast as they’re being built, there’s a new perspective to consider. New residents may have no idea what a town should have for services, he said. And sometimes they have expectations that aren’t or can’t be met. Many towns in Maine, for example, don’t have their own police forces.

Swain said his most immediate focus in Dresden will be on getting organized, tying up end of year finances, and reviewing a new personnel policy. He has already formulated ideas for additional policies he may want to implement.

Swain said he assumes he will be heavily involved in the town’s broadband plans based on his experience helping Monson get wired. He is already familiar with the process, and some of the potential pitfalls and challenges in acquiring internet service for a town.

Dresden’s potential withdrawal from RSU 2 is another important issue Swain plans to address in conjunction with the town’s RSU 2 Exploratory and Review Committee.

Swain has a clear vision around the purpose of his position as Dresden’s town administrator:

“My job is to help guide towns to keep their property taxes as low as possible,” he said. “Keeping in mind every day that it’s not my money.”