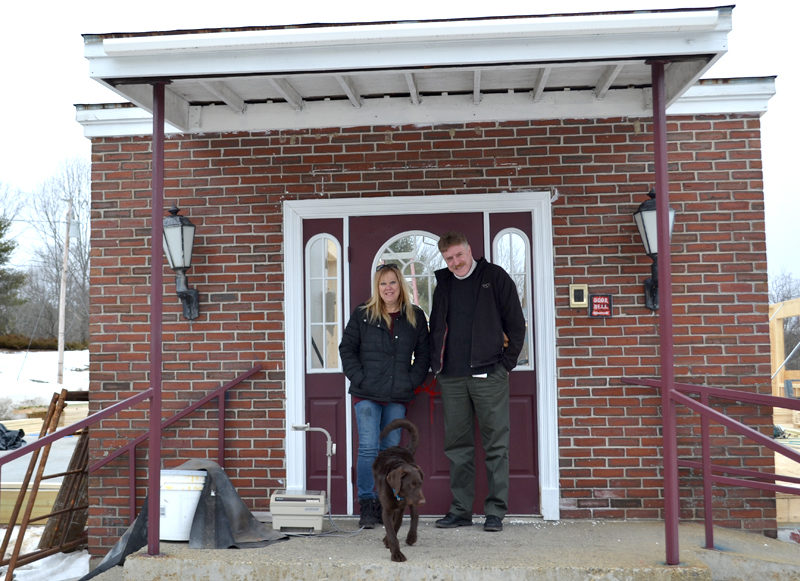 Jan Burns and Jeff Slack stand at the entrance to the Freedom Center with Burns’ puppy, Sasha, on Friday, March 24. The original entrance will remain in the rebuilt structure. (Abigail Adams photo)

The fire that destroyed the Freedom Center in Dresden in October 2016 was like no other, because the displaced residents had nowhere to go, said Jeff Slack, case manager for Maine Medical Center’s CarePartners program.

Slack worked closely with Freedom Center founder Jan Burns to provide the residents of the transitional housing center access to medication and health care. The 11 people who were residents at the time of the fire scattered to other areas of the state and country to find housing, he said.

Losing the center was devastating, Burns said, but even when she received the news that the structure was a total loss, there was not a doubt in her mind that the Freedom Center would rebuild. The Freedom Center will need to raise an additional $75,000 to complete the project, but construction began last week. 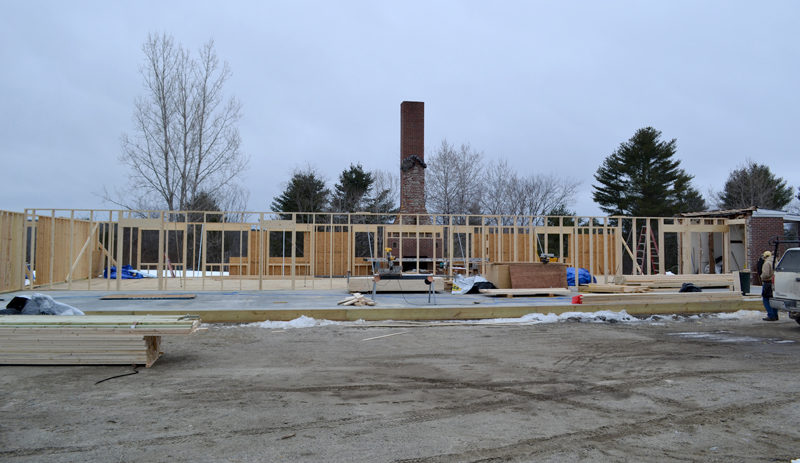 Five months after a fire destroyed the Freedom Center in Dresden, the rebuilding effort is underway. The center’s mission to provide transitional housing for men will remain when the center reopens. (Abigail Adams photo)

When the Freedom Center reopens, it will have an additional bedroom and other new features, Burns said. The mission – to provide a safe space where people in transition can begin to rebuild their lives – will remain.

Burns and Slack agreed that the community desperately needs the Freedom Center, as requests for housing are still pouring in five months after the fire.

The Freedom Center opened in 2014 in a former church on Route 27. Burns and the church’s pastor began to discuss how to use the property to help people in need.

Burns has always had a heart “for helping people on the street, or (who are) having a hard time,” she said.

Within months, Burns was deeded the property and the Freedom Center was incorporated as a nonprofit. “All the doors kept opening. I couldn’t run through them fast enough,” she said.

Working strictly as a volunteer, Burns opened the doors of the Freedom Center to provide a place for people in need “to lay their head,” she said.

The Freedom Center was open to anyone in need, whether they had just been released from jail or were experiencing another hardship, Burns said. It was a safe place where people could “think straight about what they want to do next,” she said.

In its two years of operation, the Freedom Center grew and each experience was a lesson, Burns said. Once coed, the Freedom Center transitioned to providing housing strictly to men. Residents were also asked to make a financial contribution toward their rooms, she said.

The Freedom Center did not just provide housing, it provided a community, Burns said. It was a place where people could develop life skills and access additional supports to transition to independence.

Not every person who came to the Freedom Center was ready to take advantage of the opportunity, Burns said. “I feel like everyone that was there was a success because a seed was planted in their heads,” she said.

The CarePartners program was one of several social service organizations the Freedom Center networked with to provide access to outside support, and referrals for people the center could not house.

The health care and medication provided through Slack’s program was “lifesaving” for several residents, Burns said.

Early Oct. 2, 2016, a fire that originated in the outside smoking area ripped through the Freedom Center. Ten residents were home at the time of the blaze, but all made it out safely.

While the Freedom Center was a second home to Burns, she was away the weekend of the fire. Her dog, Snickers, was at the center and did not survive.

Burns said there are no words to describe the feeling she had upon receiving the news. “To hear on the phone that it was a total loss, to put your heart into something and have it go up in smoke – I can’t explain it,” she said.

No residents were injured and temporary shelter was provided through the Red Cross, so there was a sense that “everyone was alright,” Slack said. When medication refills for residents came in and there was no Freedom Center to mail them to, “it hit,” he said.

The stability the Freedom Center provided to residents was gone, Slack said.

Residents come into the Freedom Center already traumatized, Burns said. The fire “was an added trauma, but I’m surprised how well (the residents) went through it,” she said. Most had to find housing in other areas, but remain in touch and are doing well. 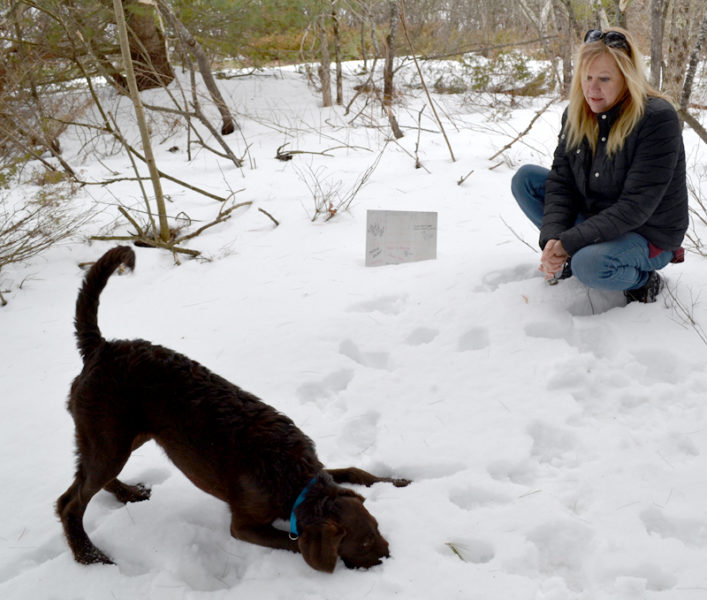 Jan Burns visits the grave of Snickers, who was lost in the October 2016 fire at the Freedom Center in Dresden, with her new puppy, Sasha, on Friday, March 24. Sasha is Snickers’ sister. (Abigail Adams photo)

Losing Snickers was hard for everyone at the center, Burns said. However, Snickers’ breeders contacted Burns after the fire and gave her the first pick of their new litter. Snickers’ sister Sasha can be seen running around the construction site as the Freedom Center rebuilds.

The majority of the building was demolished, but the original entrance and fireplace remain, Burns said. The building’s footprint will be slightly smaller than the original, but the reconfiguration is allowing the center to add an additional bedroom, she said.

An Americans with Disabilities Act-compliant bedroom and bathroom will be added to the first floor, with 13 bedrooms with private baths on the second floor. There will be a kitchen, dining area, laundry facilities, a social area, and a conference room on the first floor, Burns said. There are even plans to add a small gym.

Richard Brown, of Wooden Eye Enterprises, is heading the reconstruction effort. Brown has a long relationship with the building. His grandfather painted the windowsills when he was a child, he said. 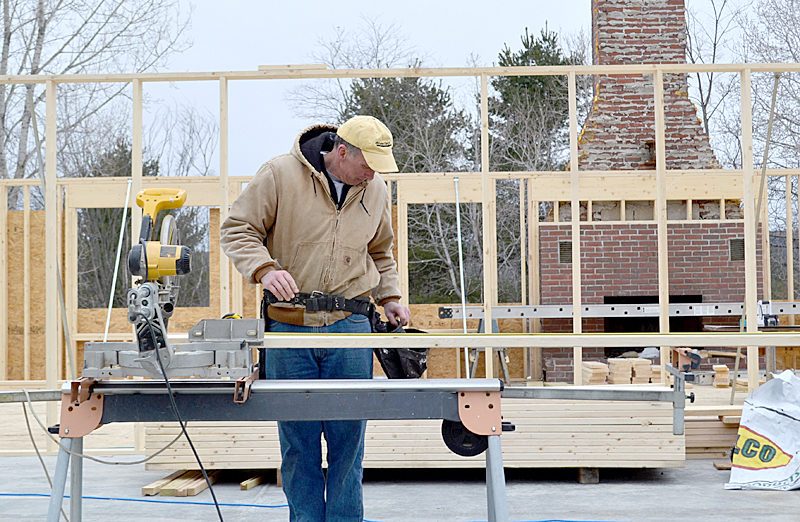 Richard Brown works on the rebuilding of the Freedom Center in Dresden on Friday, March 24. Construction began the week before. (Abigail Adams photo)

When the Freedom Center was an inn, it was where he got his first job, Brown said. When it was a church, he attended church there. He married his wife in the building. “There’s a lot of history here,” Brown said.

The fire “was a raw loss,” Brown said. “Rebuilding it is like therapy.” A lot of contractors have stepped forward to help in the rebuilding effort, he said.

The support “has been amazing,” Burns said, and is helping to keep construction costs low.

Insurance is covering most of the costs of rebuilding, Burns said. The Freedom Center will need to raise an additional $75,000 to complete the project, and will organize fundraisers in the near future.

If the project stays on course, Brown said the Freedom Center should be complete by the holidays. Slack and Burns intend to strengthen their partnership when the Freedom Center reopens to streamline residents’ access to health care.

While the rooms in the building will be reserved for men, if the Freedom Center continues to grow, Burns hopes to open a site for women. The area desperately needs the service, she said.

Earlier in the day, a person had stopped by the construction site asking when rooms will be available, Burns said.

Tax-deductible donations are being accepted via mail to the Freedom Center, P.O. Box 234, Dresden, ME 04342.