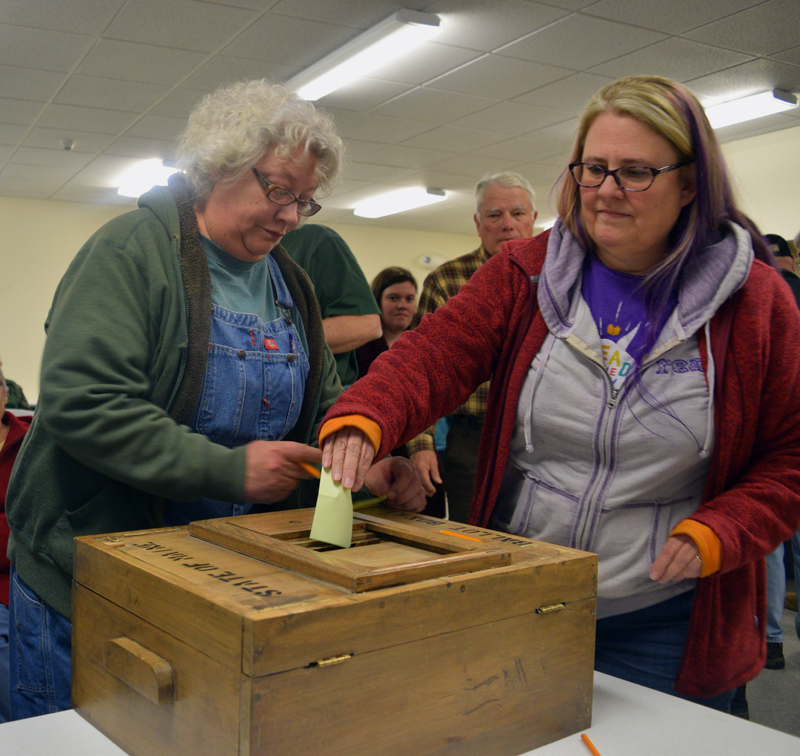 Melanie Gaczi (left) writes her vote on a slip of paper while Karen Silverman places her slip in the ballot box during a special town meeting at Pownalborough Hall in Dresden on Monday, March 11. Voters approved a change from electing to hiring town office staff, 41-14. (Jessica Clifford photo)

Dresden voters will no longer elect the staff of their town office, voting 41-14 during a special town meeting Monday, March 11 to instead allow the selectmen to hire the staff.

“I think it went great. I didn’t have any doubt that it wasn’t going to pass,” First Selectman Trudy Foss said after the meeting.

Administrative Assistant Michael Henderson said he expects the selectmen to discuss his recommendations for the jobs and approve a timeline for how they will move forward April 1.

According to a recommendation packet handed out at the special town meeting, the town clerk would work 25 hours a week. The position would absorb some responsibilities of the administrative assistant and back up the tax collector.

The town currently budgets 11 hours each for the excise tax collector, property tax collector, and town clerk, and 12 for treasurer. However, Henderson said both Pierce and Storkson work more than those hours.

The responsibilities of the treasurer would shift to the administrative assistant.

The jobs are recommended to pay $15-$19 per hour. The 30-hour position would come with some benefits because, according to Third Selectman Allan Moeller, state law requires anyone who works 30 hours or more to receive certain benefits.

The town would pay employees for training on their days off, Foss said.

The town expects wages and benefits for the positions to cost about $53,000 per year, an increase of about $19,500, Administrative Assistant Michael Henderson said. The budget is subject to voter approval at town meeting.

The selectmen plan to change the hours for the new positions as well.

The selectmen and Henderson would interview the applicants, but the final choice would rest with the selectmen.

During the Feb. 25 public hearing on the issue, Foss said Pierce and Storkson would have to apply for the positions.

“When this was voted on last, the board did not present the issue well and the issues were just presenting themselves to us in the office,” Foss said.

According to Foss, there have been at least three votes on the topic. 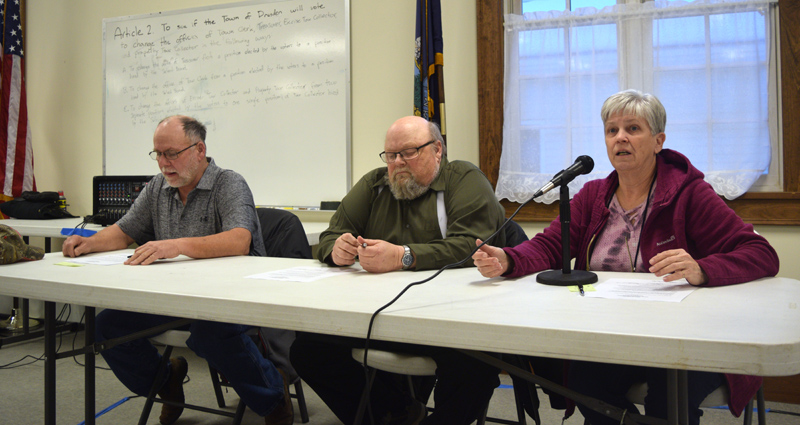 “I noticed on the organizational chart it says the town administrator reports to the select board. Is that a change in the definition of Michael’s job?” Walsh said.

Henderson said he would become the supervisor for the tax collector and town clerk and would take on the duties of treasurer; however, nothing else would change. Henderson’s new job description was in the packet.

Another resident, Rick Graffam, asked if the title change required a separate vote.

“Because the select board supervises and has the ability to control the administrative assistant position, they have the ability to change the job title or job description. That part doesn’t need to go to town vote,” he said.

Resident Amanda Silverman made a motion to add the title change to the article up for debate.

Foss said the article could not be amended to include the title change because it would be a substantive change to the warrant.

Resident Gary Blau asked if the town could postpone the vote until the title could be figured out.

Henderson said in response, “any changes to electing or hiring a town clerk has to be done 90 days prior to the election, so I believe the last possible day is Wednesday, (March) 13.”

Another resident said the selectmen should be answering more questions instead of the administrative assistant. The same resident asked one of the board members to read the recommendation for hired staff, and Foss read it.

After the special town meeting, Henderson said the board may choose to place the title change on the warrant.

“I didn’t go into a lot of depth around it, foolishly I now realize, because (the selectmen already have) the authorization for that part of it. They don’t need town meeting approval for that, but they did need it for these other positions that I focused on,” Henderson said.

Other voters asked questions about staff benefits, job descriptions, and the hiring process.

Moeller made a motion to vote by secret ballot and the motion carried. Four residents helped count the votes.