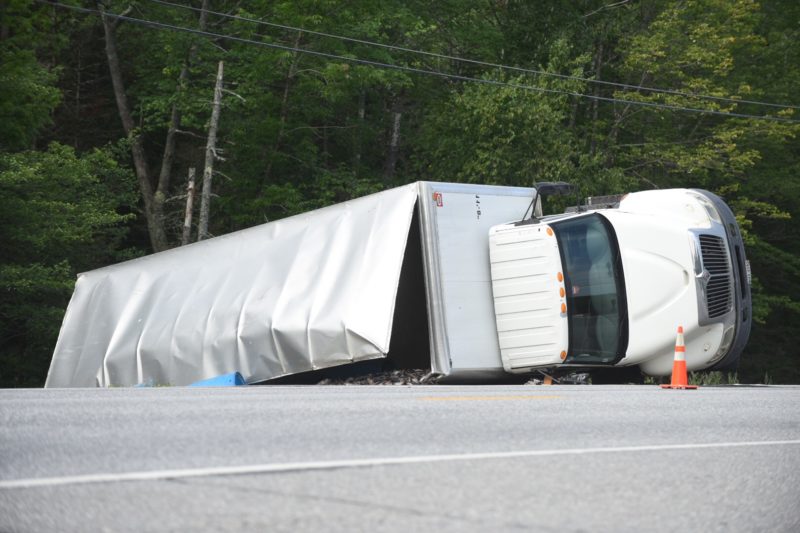 A box truck rests on its passenger side near Mike’s Place in Newcastle the morning of Thursday, Aug. 16. (Jessica Picard photo)

A box truck rolled over on Route 1 in Newcastle the morning of Thursday, Aug. 16, spilling about 35 barrels of bait onto the side of the road. Police believe speed and driver inattention were factors in the crash, and charged the driver with giving false information about an accident.

Christopher Grendell, 41, of Brunswick, was driving a 2004 International box truck east on Route 1, near Mexicali Blues, at about 9:49 a.m., according to a press release from the Lincoln County Sheriff’s Office. He entered the breakdown lane to avoid a vehicle ahead of him that had stopped to make a left turn.

Grendell lost control of the truck on the soft shoulder, causing the truck to roll on its side, according to the press release. The truck spilled its load onto an embankment next to the eastbound lane.

The Central Lincoln County Ambulance Service took Grendell to LincolnHealth’s Miles Campus in Damariscotta for treatment of minor injuries, according to the press release. He had been wearing a seat belt.

Purse Line Inc., of Sebasco Estates, owns the truck. Grendell was the only occupant of the truck at the time of the rollover.

Due to Grendell’s statements to the investigating deputy, the sheriff’s office charged Grendell with giving false information of a motor-vehicle accident, according to the press release. He will make his initial appearance at the Lincoln County Courthouse in Wiscasset on Oct. 25.

The truck and its spilled cargo were removed after 3 1/2 hours of cleanup, according to the press release.