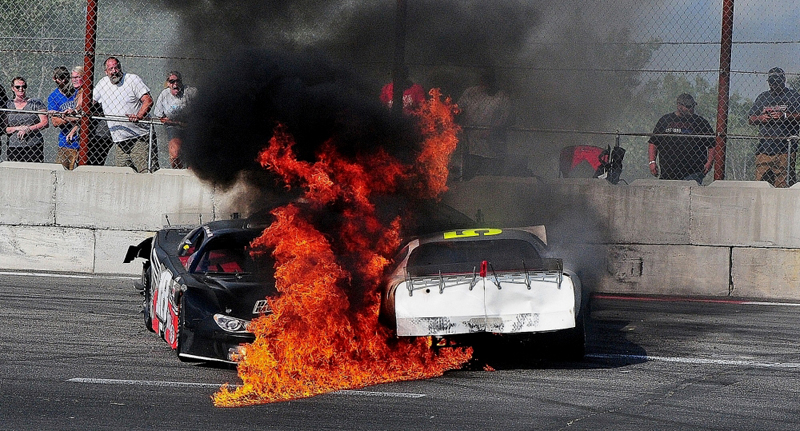 Two Pro Stock Cars engulfed in flames following a crash at the Wiscasset Speedway during a qualifying race for the Boss Hogg 150 on Sunday, Sept. 4. The driver of the white #54 car Ryan Deane sustained burns and smoke inhalation and was Lifeflighted to Maine Medical Center in Portland. He was released from the hospital on Tuesday, Sept. 6. The driver of the black #18 car, Miller Buzzell, was not injured in the accident. (Photo courtesy Peter Taylor)

Pro Stock driver Ryan Deane, of Bangor, was transported to the hospital after suffering burns and smoke inhalation in a crash during the last chance qualifier race for the Boss Hogg 150. According to a post on the speedway’s Facebook page Tuesday, Sept. 6, Dean has been released from the hospital and is “recuperating at home with family”.

“It was just a racing incident,” she said.

Wiscasset Fire Department responded to a call to clear the area for LifeFlight. A landing zone was cleared in a field on the intersection of West Alna Rd and Fowle Hill Rd just south of the speedway. 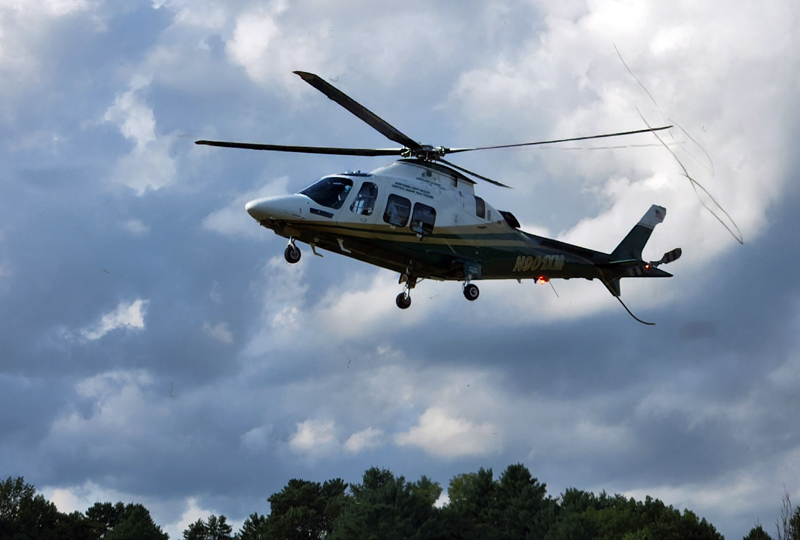 A LifeFlight helicopter takes off with a patient onboard near the intersection of West Alna and Fowle Hill roads in Wiscasset following a crash in a qualifying race at the Wiscasset Speedway Sunday, Sept. 4. (Alec Welsh photo)

Steven Rines, of Wiscasset, attending the race with his son Dillian, said he saw six cars come together, become entangled and then a fire broke out. “Fire engulfed all the cars,” he said. “I have seen a lot of crashes at the speedway. That was the scariest I have seen.”

“Mike ran over there without hesitation and started putting out the fire with an extinguisher,” Shorette said. “There are videos online you can see him jumping on the hood of the car to put the fire out.”

Jordan complimented Carleton and first responders for their swift response to the fire.

“It happened on the turn Mike was working,” Jordan said. “Mike responded to the scene and fire and EMS were right behind him.”

Melcher, who was involved in the crash, also helped fight the fire with an extinguisher.

“All the drivers have an extinguisher in their car,” Jordan said.

Donation buckets for Deane are available at the track according to the speedway’s Facebook page.