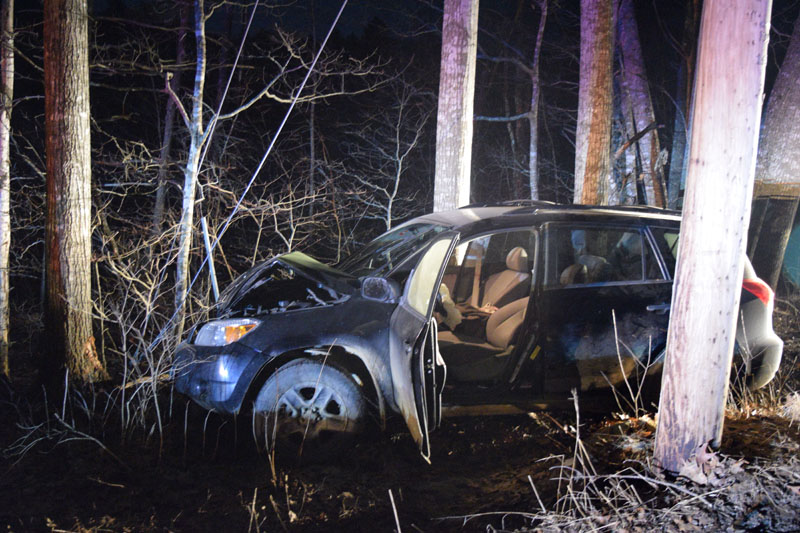 The 32-year-old driver of this 2008 Toyota RAV4 is in critical condition after a single-vehicle crash near 895 Main Road in Wesport Island the night of Tuesday, March 19. (Jessica Clifford photo)

A 32-year-old woman is in critical condition at Maine Medical Center in Portland after a crash on Main Road in Westport Island the night of Tuesday, March 19.

Bailey Bartlett, 32, of Scarborough, was driving a 2008 Toyota RAV4 south in the vicinity of 895 Main Road at about 9:45 p.m., according to the Lincoln County Sheriff’s Office. She left the road to the right, overcorrected, crossed the centerline, and left the road to the left, where the small SUV struck several trees and spun around before coming to rest in a ditch, next to a utility pole.

Bartlett suffered “fairly significant” injuries, including a head laceration, according to LCSO Lt. Brendan Kane. She was the sole occupant of the vehicle.

A Maine Medical Center spokesperson said Bartlett was in critical condition as of the afternoon of Wednesday, March 20.

She “just missed the pole sliding in,” LCSO Sgt. Matthew Day said. She probably “jarred” the poles support wires because the wires to a nearby house were drooping over its driveway, he said.

The crash is under investigation, Kane said.

Bartlett was wearing a seat belt and an airbag deployed, according to Day. The vehicle was totaled.