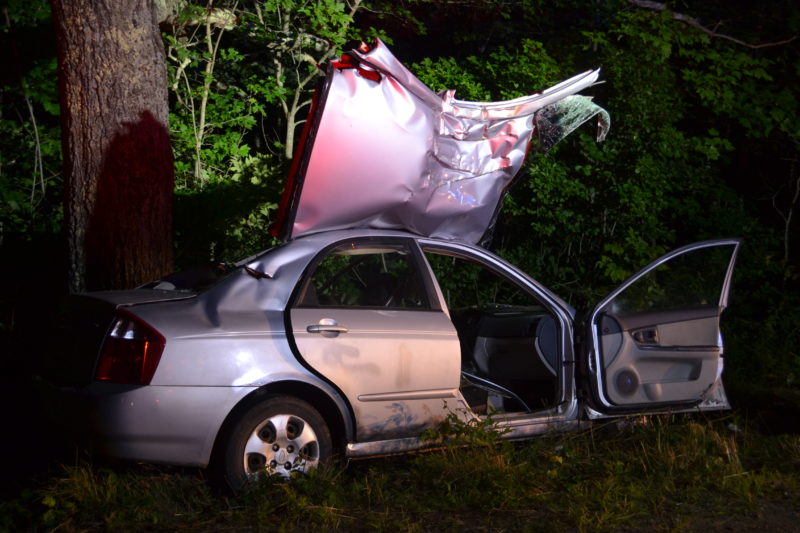 The Waldoboro Fire Department extricated the driver of a 2006 Kia after an accident on Finntown Road the evening of Sunday, Aug. 20. The cause of the accident is under investigation. (Maia Zewert photo)

A LifeFlight helicopter flew a 21-year-old Cushing woman to the hospital after a single-vehicle accident on Finntown Road in Waldoboro the evening of Sunday, Aug. 20.

The cause of the accident is under investigation, according to Sgt. Jamie Wilson, of the Waldoboro Police Department.

Santana Rytky, 21, of Cushing, was driving a 2006 Kia sedan north in the vicinity of 1980 Finntown Road at the time of the accident, according to Wilson. There were three passengers in the car.

According to a press release from the department, Rytky lost control of the car. The car then crossed the centerline and the southbound lane, went off the road, came back onto the road and crossed the entire road again before going off the northbound lane into a ditch and striking a tree.

The Waldoboro Fire Department extricated Rytky from the vehicle. A passenger was also injured, according to Wilson.

A LifeFlight helicopter flew Rytky from Medomak Valley High School to a hospital, although it was not clear which hospital. The injured passenger was taken to LincolnHealth’s Miles Campus in Damariscotta, according to Wilson.