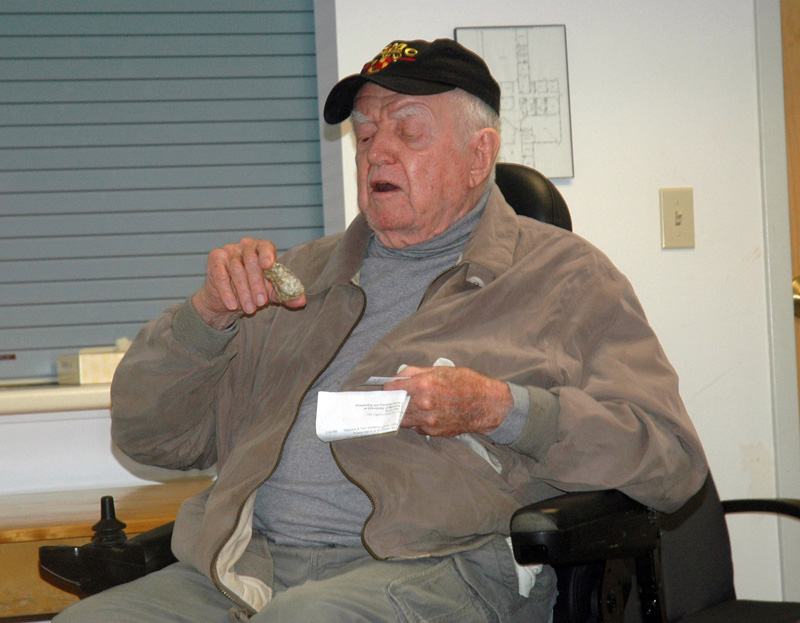 Tap Pryor discusses the possibility of an aquaculture grant for a potential seed-growth facility for oysters and clams at Dutch Neck Marine Park in Waldoboro. (Alexander Violo photo)

A public presentation on the possibility of an aquaculture grant for a potential clam and oyster seed-growth facility at the Dutch Neck Marine Park drew a great deal of public comment during the Waldoboro Board of Selectmen’s meeting Tuesday, Nov. 14.

After the discussion, the board tabled the matter. The board said it would discuss the matter in executive session prior to its next regular meeting Nov. 28.

Taylor “Tap” Pryor, who expressed interest in exploring grants that could lead to the establishment of a clam and oyster seed-growth facility in Waldoboro, was on hand to discuss the project with the board of selectmen and answer questions from the public.

Pryor, a marine biologist, has recently worked at the Darling Marine Center in Walpole, where he received two Maine Technology Institute matching grants of $25,000 to create a land-based winter oyster nursery to allow harvesters to jump-start the growing season and reduce the length of the growth cycle utilizing climate-controlled recirculating water tanks and the development of an inexpensive alternative feed produced by Ocean Organics Corp. at the Waldoboro Business Park.

“Farmers who buy the oyster seedlings can cut a whole year out of production,” Pryor said.

Pryor said that by working on land, an aquaculture project is not confined by the ecology of a site.

Pryor said that, through this process, it costs about 10 cents to raise an oyster seedling. The seedlings are sold to aquaculture farmers at a rate of 15 cents per oyster.

“A 15-cent oyster is a nice healthy margin for us and more savings for the farmer,” Pryor said.

Pryor said he has substantial experience in shellfish aquaculture and started farming oysters in the tropics before returning to Maine in 2010.

“When I moved I was interested to see an industry that shuts down in November and starts up again in April. I thought, why not bring the tropics to temperate climate farming?” Pryor said.

Though his primary experience is with oysters, Pryor expressed interest in using a potential facility in Waldoboro for seed growth, including of clam seed for use to seed the river with young clams produced locally.

“The clam harvest is kind of cyclical, but if you can put out seedlings, you can level it off and the river can be more productive. I haven’t done it yet but I have been given a great opportunity to do it,” Pryor said.

“Through seeding you are putting the clams out at a point when they aren’t as susceptible to predators and disease, just like a plant nursery will do with their products,” Pryor said.

Butler asked how construction of a potential growth facility in Waldoboro would be funded.

At the state level, the project would apply for a Maine Technology Institute grant, whereas the federal level offers opportunities from the U.S. Economic Development Administration.

Pryor estimated the initial infrastructure costs of the project at $2 million, with the idea that the entirety would be grant-funded.

“I think it’s a very excellent project, it’s innovative, and one with a favorable impact on the community,” Pryor said.

Pryor said that after looking at sites in Bremen, he was notified of the Dutch Neck Marine Park by George Seaver, owner of the Waldoboro Business Park, and Ron Phillips, former CEO of the nonprofit Coastal Enterprises Inc.

“I was thrilled by the size and opportunity to assist in a very important commercial entity, such as clam digging,” Pryor said.

Keizer said that if the project progresses at Dutch Neck, the town could explore a public-private relationship with the growth facility in which the business would lease property from the town.

Keizer said the town would be able to collect taxes on equipment at the site.

Keizer said the effort is in its very early stages and grant funding is very competitive. She said the town is just starting a conversation on the matter, with any decisions to be made after further discussion and public comment.

Keizer said the time crunch around the discussion centered on a Dec. 9 deadline for the submission of applications for a state grant.

“We are meeting tonight to get the select board’s OK to submit for the grant. It’s the first step in the process. What Tap is looking for is approval to submit an application for the grant. It doesn’t mean it’s going to happen. It’s just a step to see if funding is available,” Keizer said.

Keizer spoke on the benefits of the project for the town’s shellfish industry.

“We could benefit from having a hatchery in town. Being the number one clam landing in the state is important. It’s important to be thinking about our largest employer. The economic benefit to maintaining the clamming industry in the town of Waldoboro is something we have to be aware of,” Keizer said.

“There’s not a lot of opportunity to encourage business in Waldoboro, fully funded by grant opportunities. When something like this comes before you, you have to take a serious look at it,” Keizer said.

Selectman Katherine Winchenbach said that if the project could be used to seed the river, it could cut costs for local shellfish harvesters, who buy clam seed from Down East.

The project was not without its detractors, with a number of residents, including several from Dutch Neck, raising concerns about the impact of commercial development on a residential district.

Residents touched on the importance of maintaining the natural integrity of the river, detrimental impact on property values, and potential loss of tourist revenue.

Elaine Abel, a Dutch Neck resident who owns property next to the site, raised concerns about Pryor’s experience being largely with oysters rather than clams.

“You’ve done oysters before and said you could probably do clams, but isn’t that theoretical?” Abel said.

Abel said a similar project had been proposed to the Cumberland County town of Harpswell, which elected to back out of the project and out of a partnership with Pryor.

Abel raised concerns about whether the project would encourage invasive green crabs, which are predators of clams.

“You talk about wanting to help the clam diggers, but you’re upsetting the whole process here,” Abel said.

John Corlett, of Dutch Neck, expressed concern about impacting the natural cycle of the clam harvest and subsequent negative impacts on the area’s natural ecology.

“Nature has a reason for the harvest going up and down. What impact will it have on natural clams? How does nature react to having clams produced solidly through every year?” Corlett said.

Penny Johnston, of Dutch Neck, urged the board to take more time with the application process.

“How well will the grant be prepared with less than a month? It seems like a big rush for what many people consider a very important project. I wonder how sane that is,” Johnston said.

“Why aren’t we looking at what this proposal is? I’ve heard six jobs, a lease from the building, taxes on equipment. That has value, mostly the jobs, but what is the cost of ending up with a building that is not appropriate?” Simpson said.

“We need to decide what we want to do before we get the money,” Simpson said.

The planning board chair also voiced a desire to see more of a focus on clams in the project.

“I’m not interested in oysters at all. Our town is focused on clamming. That is what the Medomak is all about,” Simpson said.

Susan Simpson, of Dutch Neck, touched on the tax impact of such a project.

“To have a commercial property in a residential district is not in character and really wrong with what it does to property values. You’re putting us in jeopardy for our life savings here,” Susan Simpson said.