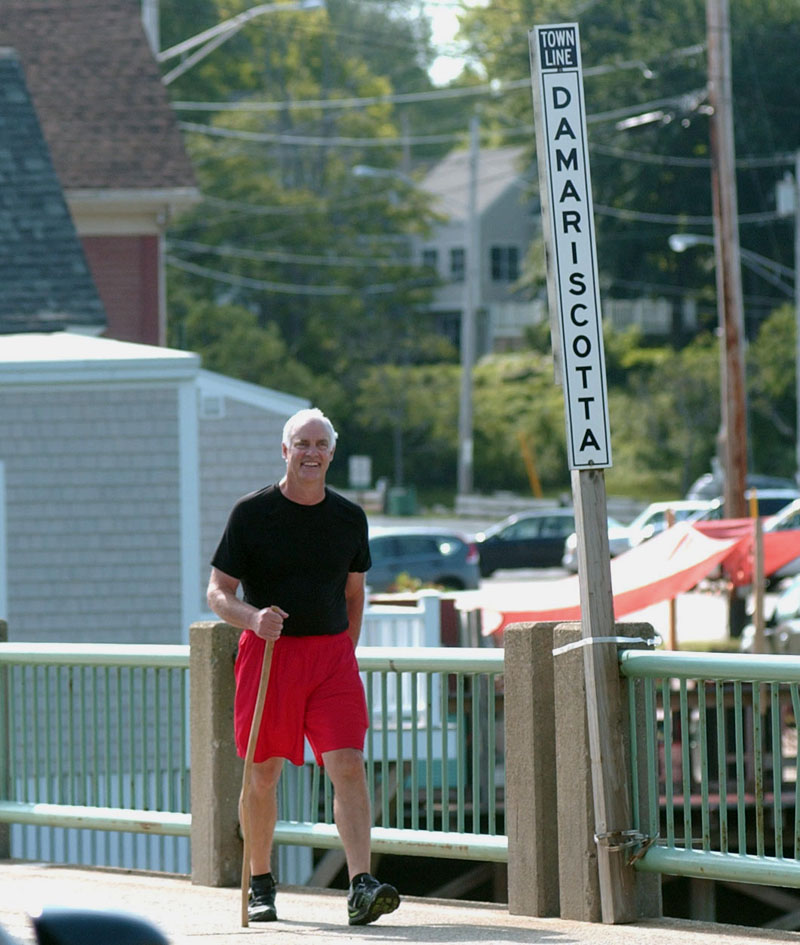 The walk had raised thousands of dollars by the end of the next day, Aug. 6. Harvey hopes donations will continue to come in.

“Truly it’s a mustard seed of an effort, and let’s see what grows out of it,” Harvey said. “If this results in $10,000 being raised because somebody walked for the amount of time it takes to play a round of golf, how powerful is that?”

Harvey’s charitable walk was inspired by an unusual series of events.

Before sharing his story, Harvey told a listener: “I want you to totally relax. I’m going to ask that you just center and just totally empty your mind and are receptive to anything, because this is so off the hook, you may not believe it.”

Harvey went on to describe a series of eagle sightings, which, in combination with his reflection on the biblical parable of the mustard seed, drove him to take action.

Harvey recently moved into a home in Newcastle, but was living in Hallowell with his father, Harmon Harvey, at the time. After years in a career that forced him to frequently relocate, Harvey had decided to spend more of his time in the place where he grew up.

“Every time I came to Maine, my folks and I would go on adventures. It didn’t matter what we were doing, we would just make it an adventure, even if it wasn’t,” he said.

These adventures encouraged him to put his dream of traveling the country in an RV aside and settle in this place he so enjoys. 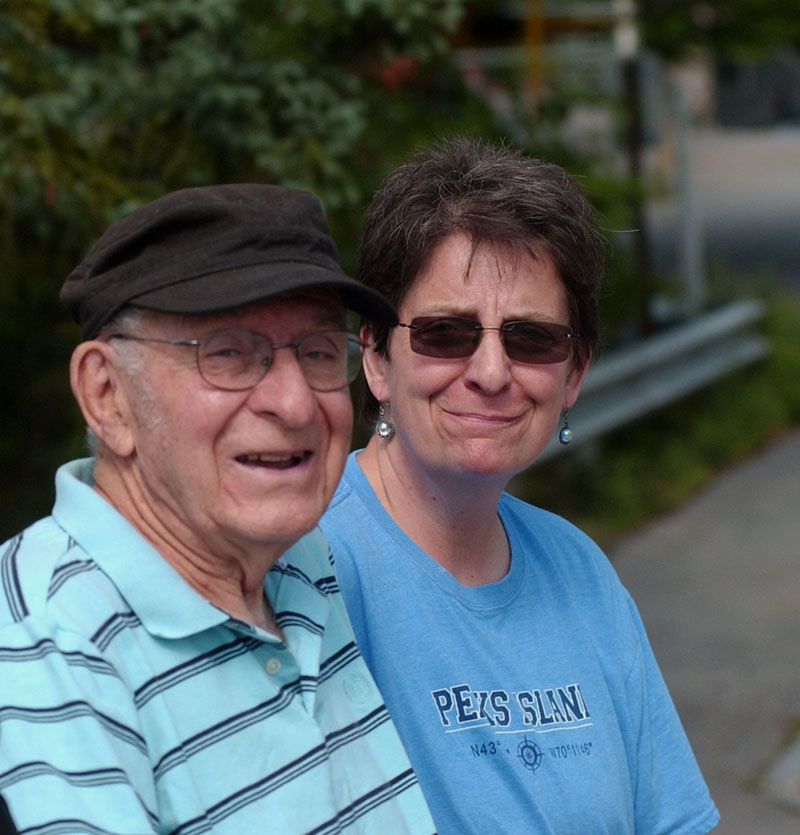 From left: Steve Harvey’s father, Harmon Harvey, and sister, Becky Harvey, wait for their son and brother along the route of his Sole Food walk. (Joelle Troiano photo)

On trips along the Sheepscot River and during walks on the rail trail near his father’s home, Harvey glimpsed one soaring eagle after another.

“One day I was traveling back from Damariscotta, and just past the Alna post office there was an eagle that flew at eye height for about a mile. It was just incredible,” he said.

Later the same day, he said: “I was going across the Kennebec River and an eagle flew up from out of nowhere from under the bridge to cross over the bridge. Any closer and I would have hit him or her.”

Not long after these sightings, Harvey and his father took part in the inaugural Damariscotta Oyster Celebration. The event took them to the Darling Marine Center and Mook Sea Farms in Walpole, where Harvey was struck by a message shared at both about putting aside politics and simply doing good for the peninsula. “These people are all about doing good,” he said.

After the celebration, Harvey took one of his frequent walks on the rail trail between Hallowell and Augusta.

“I start into the grove of trees by the overlook onto the Kennebec River, and in my peripheral vision I see something,” he said. “I just know something isn’t right, so I turn and walk back. There, 20 feet away, is the most majestic bald eagle, perched on a branch.”

After a brief stare-down with the creature, Harvey walked home and told his father about what he’d seen. Harmon, in response to the story, said: “You’d better do something. Those eagles are getting closer and closer. You need to figure something out before one lands on your shoulder!” He and his father laughed, neither taking the warning seriously.

On Father’s Day, the Harveys were at The Second Congregational Church, where the Rev. Char Corbett gave a sermon on the parable of the mustard seed – about how something great can come from humble beginnings.

The parable appears as follows in the Gospel of Matthew: “The kingdom of heaven is like to a grain of mustard seed, which a man took, and sowed in his field: Which indeed is the least of all seeds: but when it is grown, it is the greatest among herbs, and becometh a tree, so that the birds of the air come and lodge in the branches thereof.” 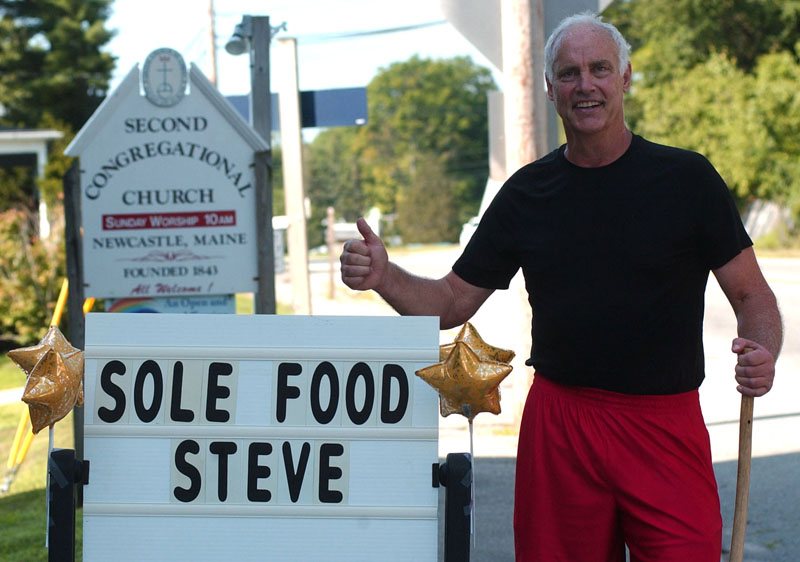 Steve Harvey gives a thumbs-up after walking from Pemaquid Point to The Second Congregational Church in Newcastle in time for the 10 a.m. service Sunday, Aug. 5. (Joelle Troiano photo)

“I’ve been going to church long enough to have heard it a few times. But it really struck me this time,” Harvey said. “Char did all the biblical stuff, hit all the headliners, and then threw in something her grandmother used to say: ‘If you have just a mustard seed of faith, great things can happen.’” Harvey said the message really stuck with him.

After Father’s Day celebrations that afternoon, Harvey took another walk and was surprised by a “huge” eagle. “At this point I was shaken, because it was just that spectacular,” he said.

Harvey walked home, but kept the latest sighting to himself. That night, he watched “Family Feud” with his father and his sister, Rebecca.

Harvey shares his name with the show’s host, the comedian Steve Harvey. “I hate to tell you, but my dad finds that Steve Harvey much more entertaining than this one,” he said.

This particular episode was a celebrity version featuring retired MLB and NBA athletes.

“The NBA team won, and they donated their winnings to the Mustard Seed School,” Harvey said. “That was when I knew I had to act. The message of the mustard seed; this confluence of eagle sightings … it was just too fabulous to ignore.”

With encouragement from his pastor, Harvey began thinking about what he could do to improve the lives of his new neighbors on the peninsula. So, once more, he decided to walk.

He started the walk at about 5 a.m. and arrived at church in time for the 10 a.m. service.

Reflecting on his walk, Harvey said: “I am convinced, no matter what, I am the one that really won.”

“My life is richer. I made friends in a new part of the world that I’m blessed to live in. I did good. I got closer with my family,” he said. “I am going to do a bunch more, because this experience has been incredibly rewarding.”