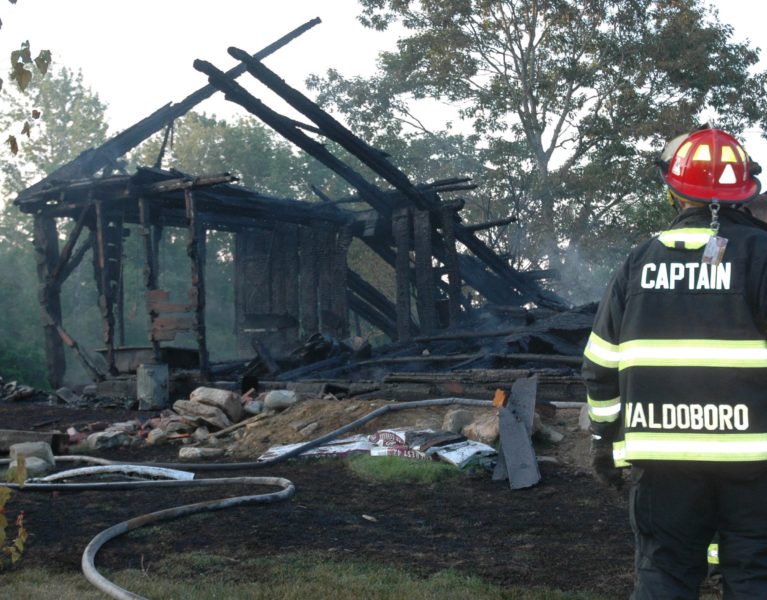 A Waldoboro firefighter looks on as crews finish up work at the scene of a house fire at 99 Atlantic Highway. There were no injuries, but the home was a total loss, according to Waldoboro Assistant Fire Chief William Maxwell. (Alexander Violo photo)

Fire destroyed a home at 99 Atlantic Highway (Route 1) in Waldoboro in the early hours of Thursday, July 21.

According to Waldoboro Assistant Fire Chief William Maxwell, two people who were inside the home when the fire started escaped without injury.

The fire gutted the home and Maxwell said that by the time firefighters responded to the page shortly after 2:30 a.m., the structure was fully engulfed and the heat from the flames was intense, melting plastic material on a pickup parked nearby.

“By the time we got here, the house was completely gone,” Maxwell said.

The assistant fire chief said the initial fire attack focused on preventing the flames from spreading to a barn adjacent to the home.

“I immediately determined the structure was a total loss. The home was fully engulfed and we were not going to be able to save anything,” Maxwell said 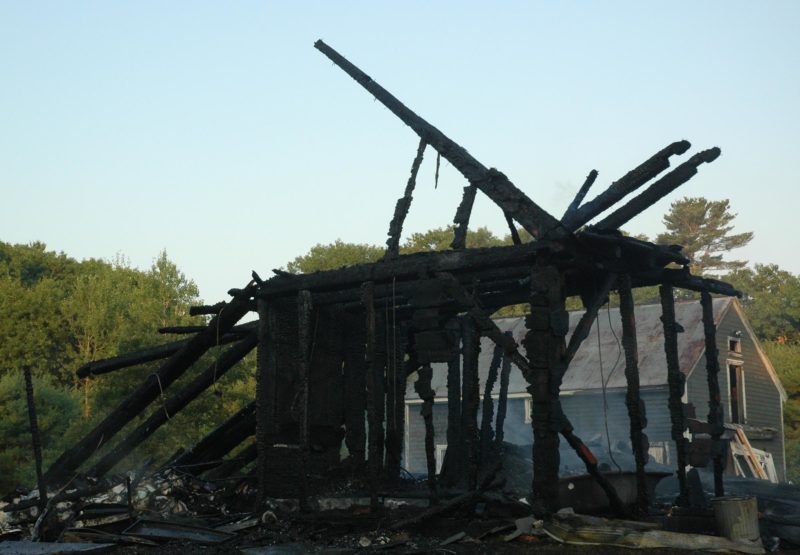 He said glow from the fire’s flames could be seen from some distance away, indicating the size and extent of the blaze.

Maxwell said crews prevented the spread of the fire to the adjacent barn and were able to knock down the fire roughly 45 minutes after arriving on scene.

He said crews were able to surround the fire and snuff out the main flames utilizing plenty of water and manpower.

The assistant chief praised the response of his own department and mutual aid from neighboring towns, noting the early hour.

Investigator Mary-Ann MacMaster, of the Maine State Fire Marshal’s Office, said the cause of the fire has not been determined.

William Weaver owns the home, and is staying at another residence in Lincoln County following the fire.

Shortly after the fire, a regional spokesman for the American Red Cross of Maine said a local Red Cross Disaster Action Response team member would meet with the family to ensure they have food, a safe place to sleep, and other essentials. The Red Cross would then remain in contact with the family for the next several days to provide referrals and other assistance.

Joining members of the Waldoboro Fire Department on scene were firefighters from Bremen, Jefferson, Nobleboro, Union, and Warren.

Waldoboro Emergency Medical Services and the Waldoboro Police Department also responded to the scene. Maxwell said Central Maine Power Co. was also called to the scene to take care of a power line knocked down in the course of the fire.