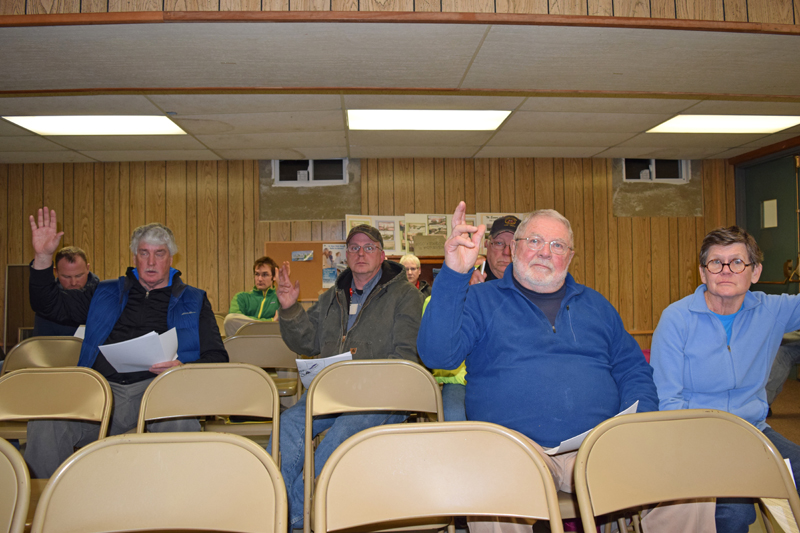 A small group of Edgecomb voters approve the appropriation of $35,678 from surplus to cover storm cleanup during a special town meeting at the town hall Tuesday, Jan. 16. (J.W. Oliver photo)

About a dozen Edgecomb voters approved moratoriums on recreational-marijuana businesses and floating structures during a special town meeting at the town hall Tuesday, Jan. 16.

Voters also approved two budget items: to cover $35,678 in cleanup costs for the Oct. 30, 2017 windstorm and $200 for soil testing on a town property. The funds will come from surplus.

The only significant discussion of the evening was in regard to the cleanup costs. Of the $35,678, $24,950 will go to Edgecomb Road Commissioner Scott Griffin’s business, S.R. Griffin Construction Inc.

Edgecomb resident Mitch Garey questioned the amount and why the town didn’t request bids for the work. The situation “could be seen as a conflict of interest,” he said.

Selectman Mike Smith said a bid process would have slowed the town’s response to the widespread damage.

“I do see your point,” Smith said. “I don’t know if we could have responded as quickly without the home-field advantage of Scott.”

Edgecomb Board of Selectmen Chair Jack Sarmanian said Griffin has historically acted as “both road commissioner and deliverer” of roadwork services for the town.

The selectmen agreed to revisit the matter at a later date.

The remainder of the funds will cover the fire department’s costs, including 412 man hours for cleanup, damage assessment, welfare checks, and support to utility workers during the restoration of power.

The funds will also cover damage to two department vehicles and a generator at the fire station.

A tree hit the department’s command vehicle, causing $1,798 in damage, according to Edgecomb Emergency Management Director Bill Witzell. An alternator died in another vehicle. A power spike from the return of power damaged the generator.

Rebecca Gardner expressed appreciation to the department for “a great job” during and after the storm. “I can’t thank you guys enough,” she said. 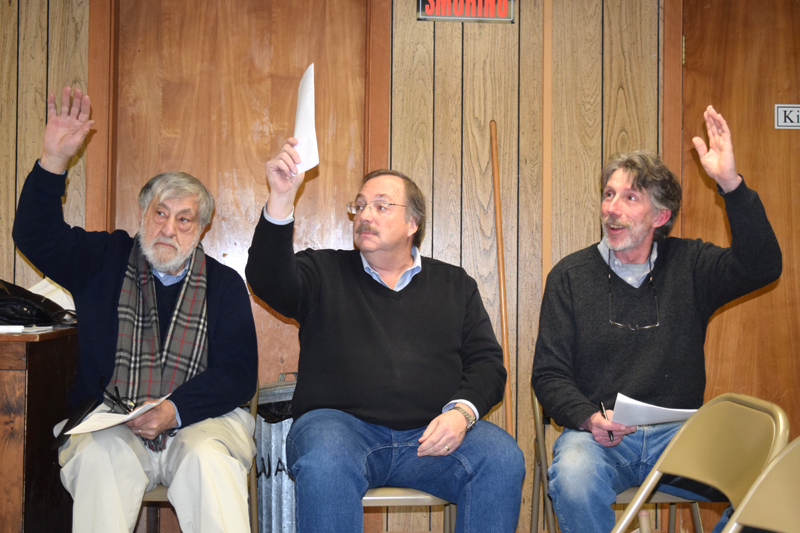 The ban on floating structures comes in response to unexpected “development pressure” and the town’s lack of regulations for the structures, according to the language of the moratorium.

The marijuana moratorium comes amid continuing uncertainty about how the state will regulate recreational marijuana after its legalization in a November 2016 referendum.

Most of the small crowd of voters present were town officials, including the selectmen, the fire chief, the emergency management director, the chairs of the budget committee and planning board, and a member of the economic development committee.

At the beginning of the meeting, Edgecomb Town Clerk Claudia Coffin expressed concern about the removal of a legally mandated notice of the meeting from the Edgecomb Post Office.

Coffin said Constable Robert Leone posted the warrant for the meeting at the post office, but someone removed it.

“If you ever hear of anything like this happening, please explain that that cannot be removed,” Coffin said. “We can be in a lot of trouble if that happens.”

The town will save $91,740.49 over the remainder of the Edgecomb Eddy School loan, according to a letter from the Maine Bond Bank.

During its regular meeting prior to the special town meeting, the selectmen welcomed the news from Coffin. Sarmanian called it wonderful and Smith gave it a thumbs-up.

The savings “represents your pro-rated portion of the savings the Bond Bank is providing as a result of its recent refunding issue,” Maine Bond Bank Executive Director Michael R. Goodwin said in a Dec. 14 letter to Coffin.

The letter did not provide details on the “refunding issue.”