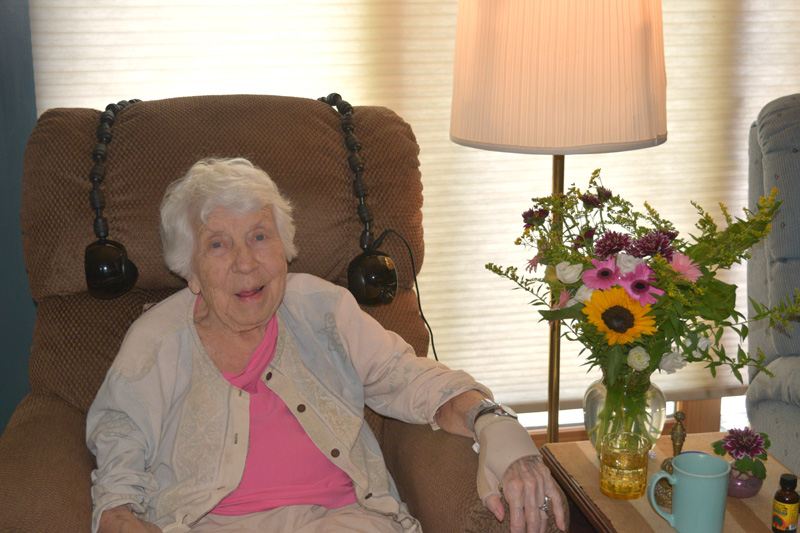 A lot can be accomplished in 100 years, and Edgecomb resident Roslyn Strong is proof.

Strong will celebrate her 100th birthday Saturday, Sept. 12 at her home, which is full of her artwork from throughout her life. She was interested in art from a young age, watching her father, Andre, work in the beginnings of the screen-printing industry.

Strong was born in North Bergen, N.J., across the Hudson River from Manhattan, in 1920. Her father had grown up in Lyon, France, and found a community in New York City.

“All the French knew each other,” Strong said. She attended Textile High School in Manhattan, where her father was a teacher, and learned about textile manufacturing.

After high school, she met her husband, ceramicist Harris G. Strong. The couple had a variety of art businesses between them, including Roslyn Strong’s silk-screening business, Maison Andre, that she started when she was about 20, and her husband’s company, The Potters of Wall Street.

Stone remembers that her husband and his partners rented a fourth-floor studio and had to carry all the pottery and glazes up the stairs. Her husband’s work from the 1950s is still sought after, and some pieces sell for around $1,000.

Strong moved to Maine in 1970 with her husband and their two sons, Matthew and Andre. They lived in Ellsworth and opened Strong Gallery in Trenton before divorcing in the mid-1980s.

For years, Roslyn Strong has been a dedicated member of the New England Antiquities Research Association and has served as its president and vice president. It was through the association that she met her partner, Suzanne Carlson.

Carlson and Strong moved to Edgecomb together in the 1980s, where Strong has lived ever since. Carlson, 81, is in an assisted-living facility in Camden.

Carlson, according to Strong, was a brilliant architect and linguist, able to read ancient languages and translate runes. The pair went on expeditions to archaeological sites in France every year, bringing about 20 people along on the trips.

Strong has always been influenced by archaeology. Her high school had a textiles museum, which sparked her interest. “I always wanted to know what came before, what’s underneath,” she said.

“I grew up with the travel bug in me. I inherited that,” Strong said. Over the years, she’s traveled in England, Scotland, Italy, Iceland, France, Brazil, and Peru. She always wanted to visit North Africa, where her father spent some of his childhood.

She said one of the keys to longevity is a good attitude. “I always had an optimistic outlook, positive,” she said. “I wasn’t going to take the gloomy side.”

Strong will celebrate her birthday with a small party with her sons and their wives in her backyard. She has been hard at work taste-testing Champagnes for the occasion.