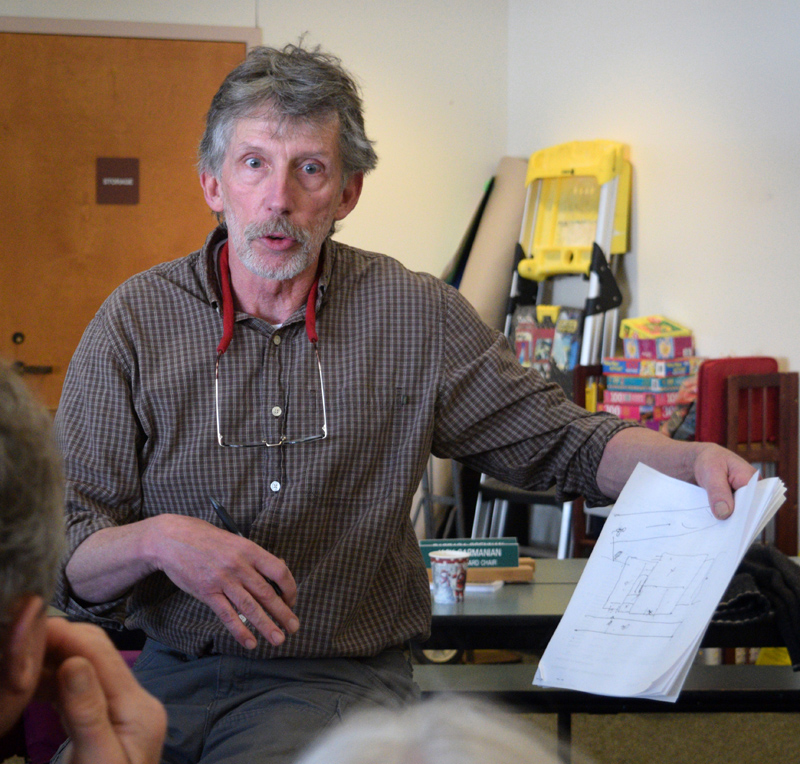 Edgecomb Selectman Mike Smith displays a drawing of what an addition onto the town hall might look like during a special meeting at Edgecomb Eddy School on Saturday, Dec. 7. (Jessica Clifford photo)

A recent special meeting reveals Edgecomb residents have mixed feelings, but share general interest in exploring ways to improve efficiency and access in the town office, as well as forming a public works department.

The meeting at Edgecomb Eddy School on Saturday, Dec. 7 follows months of planning by the Edgecomb Board of Selectmen for a community-wide meeting to talk about the town’s future.

“This all coincides with Edgecomb’s 250th anniversary, which is in 2024,” said Selectman Mike Smith, who pushed for the meeting. “It seemed like a good time to explore, recognizing that 250 years ago a group of people said, ‘Let’s get together and incorporate this town and move it forth.’”

The meeting was in a world cafe format. Residents broke into three groups, with a selectman facilitating a discussion on a single topic. The selectmen moved to each group and spoke for around 15-20 minutes about their designated topic. Afterward, the selectmen came together to conclude the meeting.

The groups discussed three topics: the possible hiring of an administrative position, the possibility of a public works department, and how the town hall building could better serve residents.

During an introduction, a few residents were vocal about the meeting’s setup after Jack Sarmanian, chair of the board of selectmen, said the selectmen want to hear what they have to say. The bulk of the discussion was limited to the three topics; however, Smith told those in attendance they could bring up future talking points during the summation of the meeting.

Residents who have concerns can come to the regular selectmen’s meetings. For school concerns, they can go to Edgecomb School Committee meetings.

“At least I know a lot of the people are here today because it’s an issue about taxes, and all you talk about all makes great sense, but if you don’t have money …,” Dr. Kathryn Rohr said.

At the Nov. 18 selectmen’s meeting, Smith said the town has a budget of more than $4 million, which includes education spending.

Sarmanian, later in the introduction, said he understands budgetary concerns and “the biggest consideration, unequivocally, is finances.” However, he said, the town needs to get creative and start the planning process.

Shortly after, the roughly 40 people present broke into groups.

According to Smith, the town does not have a bid package for snowplowing. They have a “handshake commitment” with the Griffin family, which has plowed for the town on and off for three decades.

According to Selectman Ted Hugger, the board does not have an estimate for the cost of a public works department at this time. The snowplowing contract is one of the most expensive parts of the town budget.

Hugger has discussed the idea with Scott Griffin, the town’s road commissioner and owner of S.R. Griffin Construction Inc., which holds the snowplowing contract. He described Griffin as open to the idea.

Griffin was not present at the meeting. 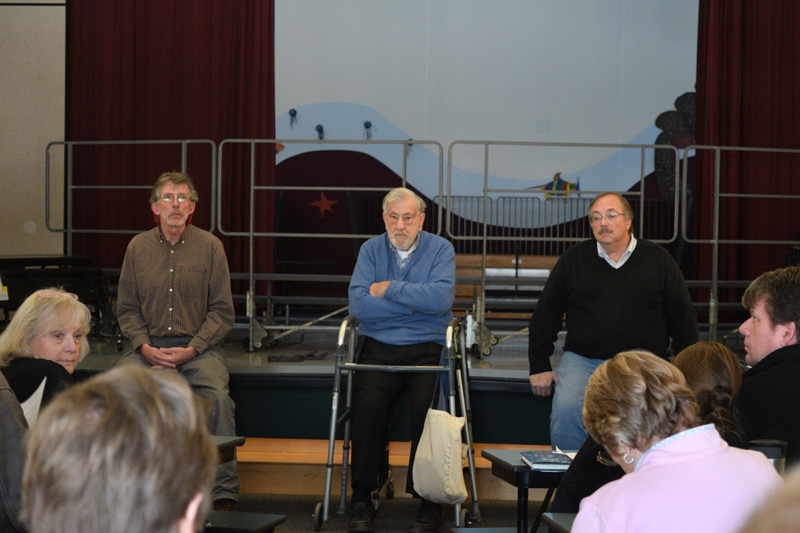 The Edgecomb Board of Selectmen takes questions at the end of a special meeting at Edgecomb Eddy School on Saturday, Dec. 7. From left: Mike Smith, Chair Jack Sarmanian, and Ted Hugger. (Jessica Clifford photo)

In an email after the meeting, Hugger, who facilitated discussions on the potential public works department, said residents made three consistent points. They want to control spending and reduce taxes, they like Griffin’s work, and they want to explore options while Griffin is under contract.

“Right now it works, probably because of Scott’s integrity to start with and the quality of his work, but if he retires and sells his business to somebody else, we are starting on a new page at that point and, again, it’s remaining out of the town’s control,” resident David Nutt said. “I think the idea of turning it into an Edgecomb town public works is a good idea in that we control the whole show.”

Others agreed it would be worthwhile to explore the option for the future by making a list of pros and cons and researching the ways other small Maine towns handle public works.

Hugger said the town could look back at how many hours Griffin and his business worked in Edgecomb and when.

One challenge with a public works department would be human resources and management issues.

Conversations about adding an administrative position to the town office focused on steps the town would need to take to do so.

Sarmanian, in a phone interview after the meeting, said there was no criticism of the elected officials who work in the town office. However, residents are interested in expanding the hours the town office is open to better serve residents.

Deb Boucher currently serves as tax collector, Claudia Coffin as town clerk and treasurer. The office, in the basement of the town hall, is open 10 hours a week, Sarmanian said.

“I’m not knocking Deb and Claudia at all, but we are so antiquated,” Dawn Murray said.

“Claudia is a great person. We love her to death, but if she were to decide today, ‘I’m going to Tahiti and I’m never coming back,’ nobody is going to understand her system,” Murray said.

She suggested that the town collect information for job descriptions for the positions of tax collector, town clerk, and treasurer.

“How do you think about what you want, in addition to what you have, if you don’t know what you have?” Murray said. “My opinion is, before you go looking to add another position, find out what the positions you have are doing.” 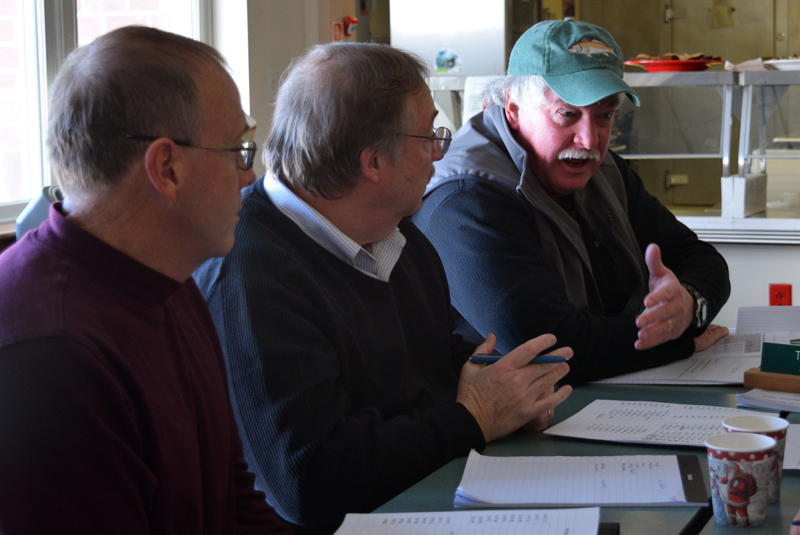 It might be time to change those positions from elected to appointed, Edgecomb Fire Chief Roy Potter said. Nearby Dresden recently made a similar change.

Resident Taylor Chase suggested that the town switch from doing business on paper to computer.

“It should be all computerized. … It’s almost 2020 and everything’s computerized nowadays,” she said.

Smith’s discussion about the town hall focused on improving accessibility to the office, potentially by building an addition onto the first floor for the office.

The town hall is not handicapped-accessible, Smith said. With Edgecomb’s aging population in mind, he said, it would be best to focus on an alternative location for the office in the building.

Smith, an experienced builder, displayed a schematic of the town hall showing an addition on the south side of the building with its own entrance.

According to Smith, one group was for and another group was against the idea, while the third wanted to explore other options.

Resident Northrup Fowler said the town should consult an architect.

“Consider other options; let them propose the options,” he said.

Another resident, Mimi Steadman, suggested renovating the basement and making it handicapped-accessible.

“I think the town hall question and the roads question are immediate things that need to be considered. The administrative assistant is really a much bigger thing because you’re really beginning to look at restructuring town government,” she said later in the discussion. “If you start with the administrative assistant, it’s sort of like starting to build a house by choosing the door knobs. You’ve got to do the overall plan first and then go down to the nitty-gritty.”

The conversations occasionally strayed to subjects such as the school, affordable housing, and town meeting, but the selectmen steered discussion back to the agenda.

After the final conversation came to a close, the selectmen asked if there were any questions.

Resident Jack Brennan thanked the selectmen for holding the event.

The selectmen will discuss the meeting at their next regular meeting, Monday, Dec. 16. They said they will not make changes hastily.