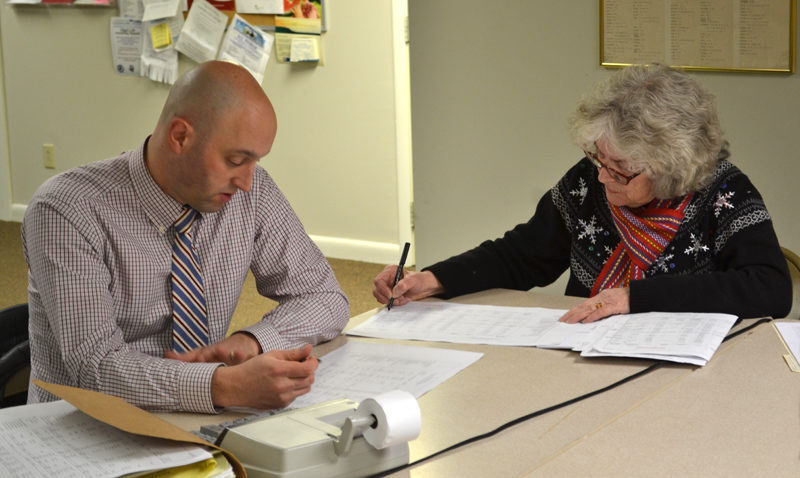 Auditor Fred Brewer and Treasurer Claudia Coffin review town accounts during a meeting of the Edgecomb Board of Selectmen at the town hall Monday, Jan. 30. (Abigail Adams photo)

With budget season underway, the Edgecomb Board of Selectmen announced at their Monday, Jan. 30 meeting a formal directive to department heads to reduce their budgets by 5 percent for the 2017-2018 fiscal year to prevent another tax hike.

The directive is a proactive step the town is making to take control of Edgecomb’s financial future, Selectman Ted Hugger said.

“By acting proactively to limit town spending across the board over the next three years, we’ll be able to work toward a goal of reducing the tax burden on our citizens and toward building a capital reserve to address our future needs,” selectmen wrote in a letter to department heads.

Edgecomb’s mil rate has fluctuated widely over the past four years, as the town works to recover from errors in its tax commitment from the 2012 to 2014 fiscal years. The selectmen at the time used the town’s surplus account to correct the errors.

Auditor Fred Brewer, of William Brewer CPA, met with the Edgecomb Board of Selectmen and Treasurer Claudia Coffin on Jan. 30 to determine, of the town accounts with balances at the end of the year, which the town should use in the next fiscal year and which balances it should place in surplus – a last step in finalizing the 2015-2016 audit.

Selectmen’s conservative budgeting and spending were largely responsible for the growth of the surplus account, Brewer said. “I’m surprised you’re doing as well as you are,” Brewer said. “You’re catching up from the commitment errors of years past.”

“The state’s budget is coming at us pretty quick,” Selectman Mike Smith said, in reference to Gov. Paul LePage’s biennial budget. “All kinds of things lead us to believe the state intends to make towns pay for everything.”

The Edgecomb Board of Selectmen intends to invite local legislators to a future meeting to express concern about the impact some of LePage’s proposals would have on local property taxpayers.