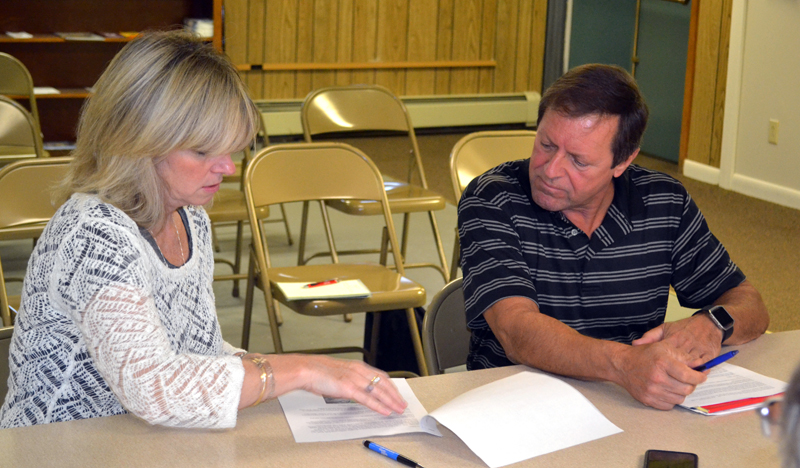 The town of Edgecomb can add signage and request a speed study to address safety concerns on Eddy Road, Maine Department of Transportation Regional Planner Gerry Audibert said. More long-term options would require “a major effort with a low likelihood of acceptance,” he said.

Audibert attended the Edgecomb Board of Selectmen’s Monday, Sept. 11 meeting to discuss the Eddy Road. Previously, Boothbay Harbor resident Maggie Connelly asked the selectmen to take action to improve safety on the road after she experienced what she described as a near-head-on collision with a tractor-trailer.

“Everyone seems to have a story about a near-miss or something on the road,” Connelly said. She asked about the possibility of limiting tractor-trailers’ use of the road.

Eddy Road is a state road and it is not currently DOT policy to restrict commercial vehicles’ use of state roads. It would be possible to petition the DOT to restrict the time of day when tractor-trailers could use the road, but it would require “a fairly significant public process,” Audibert said.

The process would require buy-in from trucking companies, neighboring towns, and the public, Audibert said. “It’s an extreme long-shot. No one recently has been able to get it done,” he said.

The other “extreme” option would be to reclassify Eddy Road as a local road, Audibert said. The reclassification would mean Edgecomb would lose the state funds it currently receives for maintenance of the road.

The sharp curve after the intersection with Fort Road is of particular concern, as there is steep ledge on one side of the road, Connelly said.

The Edgecomb Fire Department no longer takes its fire trucks down Eddy Road unless absolutely necessary because of that curve, Edgecomb Fire Chief Roy Potter said.

A fire engine was damaged after scraping the ledge on the curve to avoid a head-on collision with a car that was across the yellow line, Potter said.

Residents in attendance asked about the possibility of removing some of the ledge and widening the road.

The speed limit on the road is 30 mph, Audibert said.

Selectman Mike Smith asked if the speed limit should be reduced to 25 mph due to the residential character of the road. The DOT would consider the matter in its speed study, Audibert said.