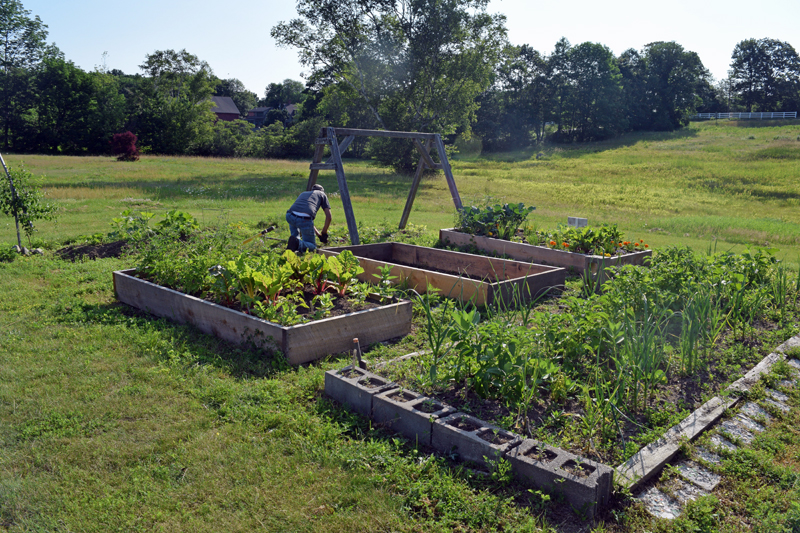 The Edgecomb Eddy School and Family Garden blooms with vegetables and flowers. The garden is in front of the school, on the lawn past the roundabout at the front entrance. (Jessica Clifford photo)

A new vegetable and flower garden is thriving at Edgecomb Eddy School, where the gardeners plan to teach students and community members about gardening and nutrition.

In the past, teachers had occasionally gardened in the area with their classes, but not much recently, according to Ingrid Merrill, who teaches English as a second language at Edgecomb Eddy School and German at Boothbay Region High School.

Merrill started the garden project and is the volunteer coordinator. She is a member of the Boothbay Harbor Rotary Club.

The club’s visioning committee looks for ways to help with issues on the peninsula, then encourages Rotarians to start subcommittees that implement the ideas.

Merrill suggested revitalizing the garden at the Edgecomb school.

“We were trying to get a research project going to find out the details behind what’s keeping people from getting nutritious foods for their families,” Merrill said, “but we said, ‘Let’s not wait, (because) a research project can take so long.’”

Members thought starting a garden would have a more immediate impact. 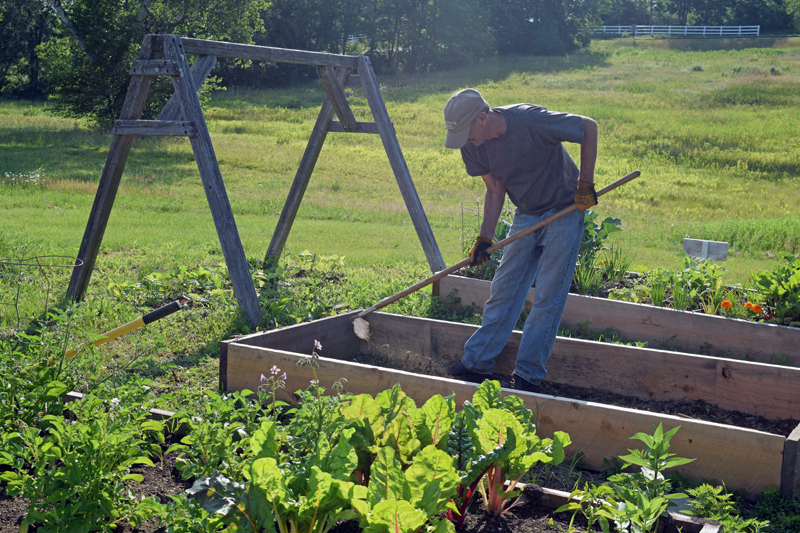 Bill Prince, a member of the Boothbay Harbor Rotary Club, works in a raised bed in the Edgecomb Eddy School and Family Garden on July 9. (Jessica Clifford photo)

Merrill received the OK from Edgecomb Eddy School Principal Ira Michaud to use the land. The garden now has a few raised beds.

Michaud had spoken to Dawn Garey, a recently retired teacher who helped tend the garden, about adding raised beds, because they are easier for children to work beside.

“So I was excited when (Merrill) had this idea that already aligned with the project I’ve been wanting to get done,” Michaud said. “(The Rotary) provided some really nice funding and additional support, with Rotarians helping out with the work.”

The Boothbay Harbor Rotary Club provided a $750 grant to pay for supplies, like lumber, soil, and seeds.

In the middle of June, Merrill began working on the garden, which is in front of the school, past the roundabout, and peeks through a break in the trees on Route 27. The name of the garden is the Edgecomb Eddy School and Family Garden.

The plan is to use some of the “kid-friendly vegetables” for snacks at school, Merrill said. Some of the vegetables that will be ready to eat at the beginning of the school year include potatoes, green peppers, and pumpkins.

Other “little odds and ends” in the garden include marigolds and herbs, she said. 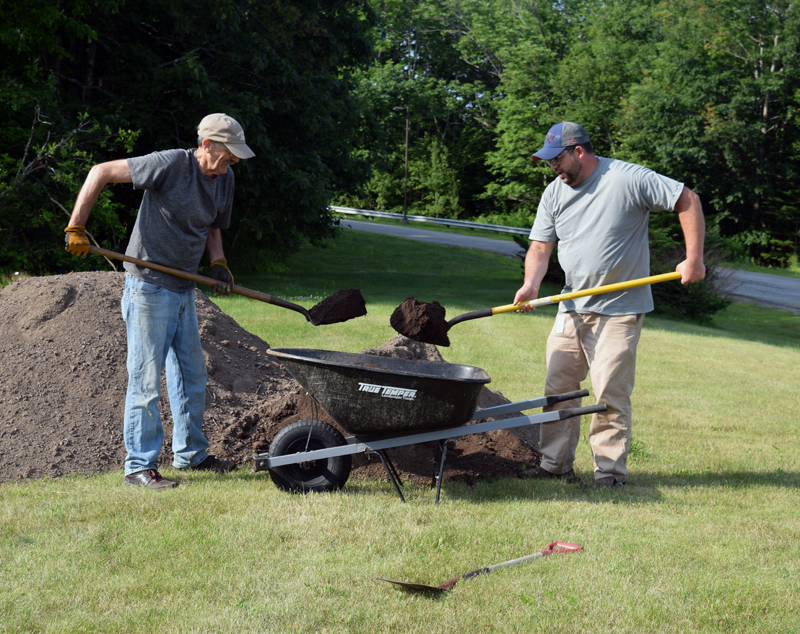 After the vegetables are harvested, other seasonal ones will replace them.

Merrill said there are at least 150 plants in the garden.

Starting this school year, she hopes to recruit another volunteer to help set up an after-school club for students to work in the garden.

The garden will also become a gathering place for adults. Starting in September, Merrill will hold a monthly garden happy hour on Mondays. People will meet at the garden to check on it and show it off to newcomers. Then the group will congregate at the nearby Cook’s Landing Bar and Grille for food and drinks, and to share gardening tips.

Merrill hopes to eventually have the school cafeteria use the vegetables; however, she said it will take a while to navigate the regulations governing student meals.

The long-term goal for the project is for both children and adults to gain knowledge about gardening and provide nutritious vegetables for their families.

“As Rotarians we fund projects all around the world … We are funding gardens in Mexico and Africa and I’ve realized we don’t have fresh vegetable gardens on our peninsula for the kids in our school,” Merrill said. 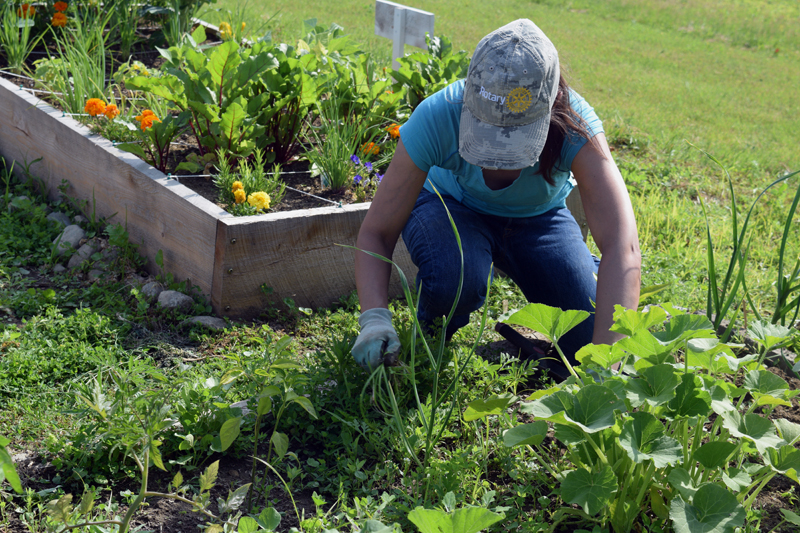 “We have a lot of poverty and almost half the kids have free and reduced lunch, and so it just seems like an obvious need,” she said.

She also expects the project to bring the community closer together and help create more self-sufficient children.

Many of the school’s teachers, such as third grade teacher Sarah Currier, who already has plants growing in the garden, are interested in using space in the garden for their classes.

Anna Blank, farm education director for The Morris Farm Trust, will assist classes that use the garden.

“I’m a big fan of anything where they can learn and get dirty,” Michaud said, referring to his students working in the garden.

The principal can also be spotted taking care of the garden himself.

Merrill said she has applied for a $10,000 grant from the Rotary Foundation to start a separate, larger project, “although it is along the same lines as what we have started.” 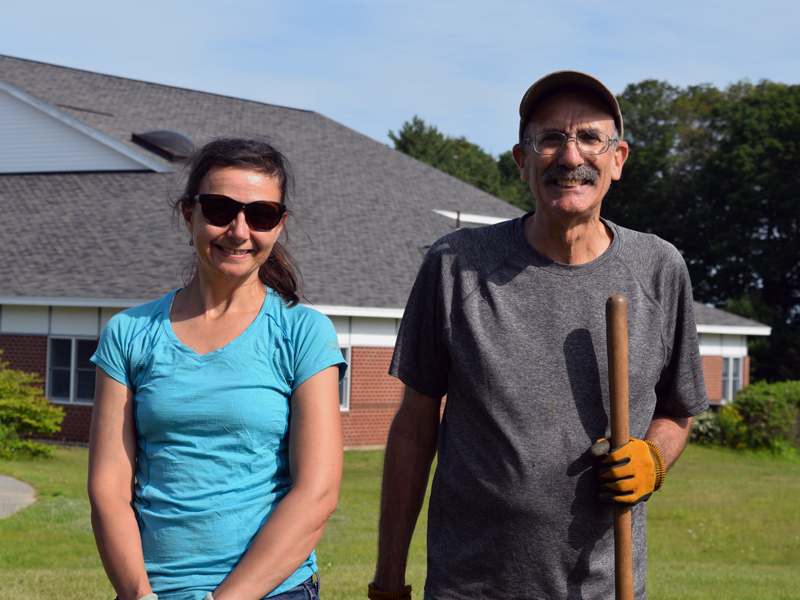 The money would go toward the purchase of more playground equipment at the school and toward more raised beds at the school, Camp Knickerbocker, and the Boothbay Region YMCA.

Merrill said the larger project would become similar to the FARMS at the Y program in Damariscotta, which provides education about nutrition, promotes farm-to-institution purchasing, and offers hands-on instruction of gardening and cooking.

Merrill has a name for the pending project: Eat Well, Play Well. She hopes to learn the results of the grant application by the end of summer.

The project already has a number of volunteers from the Rotary and the larger community, but Merrill is always looking for more. To volunteer, contact Merrill at imerrill@aos98schools.org.

Merrill is collecting information from people who want to receive an email newsletter with updates on the project. A website and a social media account for the Edgecomb Eddy School and Family Garden is coming soon.

Another upcoming project will include planting a flower garden in honor of Garey.

“She is a wonderful teacher, so I am so glad we can make this garden nice for her,” Merrill said.

If the garden project is successful in Edgecomb, Merrill said, she wants to replicate it at Boothbay Region Elementary School.