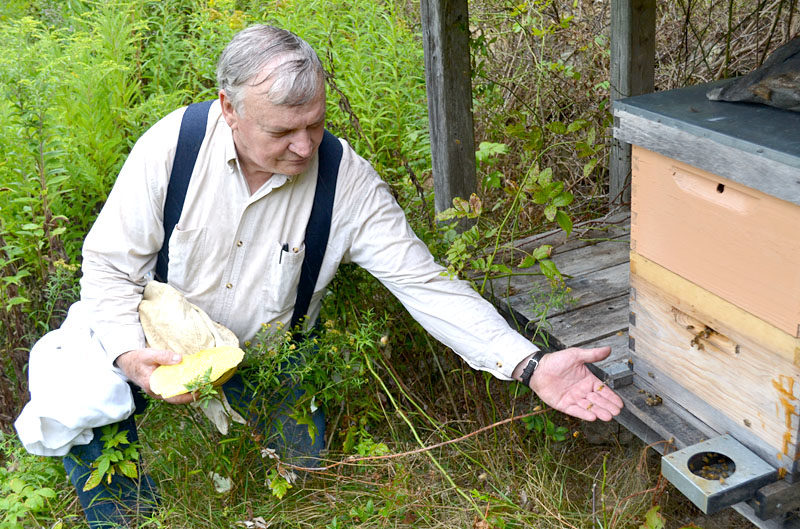 Ray Shadis sits with his honeybees at the apiary on his farm in Edgecomb on Friday, Aug. 26. (Abigail Adams photo) 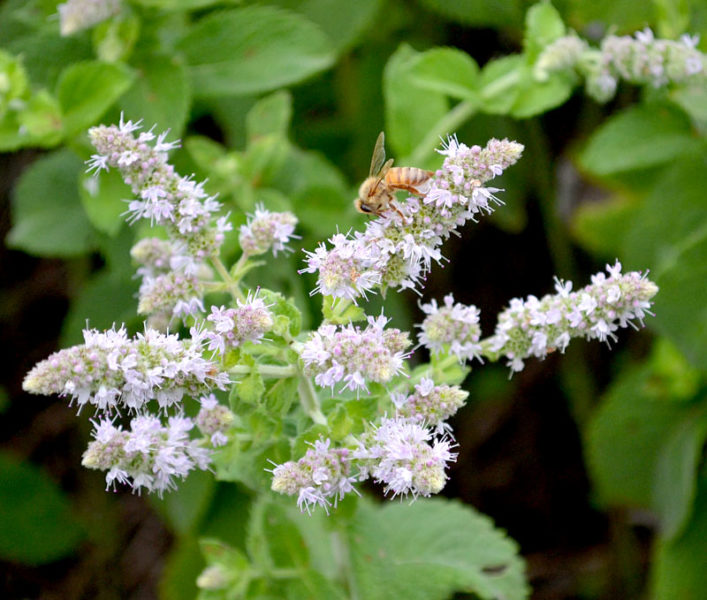 A honeybee works in a field of mint on Ray Shadis’ Edgecomb farm on Friday, Aug. 26. (Abigail Adams photo)

In early August, a swarm of honeybees from Ray Shadis’ Edgecomb farm took off to find a new home. The swarm will not survive the winter without help, Shadis said.

While a long shot, Shadis is encouraging his neighbors to be on the lookout for the small, winged creatures with furry bodies.

The swarm that left in August has a young queen that just hatched in June, Shadis said. This late in the season, the bees will not be able to produce enough nectar or honey in their new home to survive the winter, Shadis said.

However, if the bees are fed sugar water, it will give them the sustenance needed to make the wax and honey that will enable them to survive, he said.

Shadis has tended bees off and on since moving to Edgecomb about 45 years ago. It is a family tradition inherited from his grandfather in Lithuania. “In the old country, there isn’t a homestead without honeybees,” Shadis said.

Honey was one of the only natural sweeteners people in Eastern Europe had access to at the time, he said. A typical hive can produce 40-50 pounds of honey, he said.

A bee colony is composed of a queen, worker bees, and drones. Worker bees are responsible for gathering pollen and nectar, building nests, and tending to the brood. The primary duty of drones is to mate with the queen bee. Each colony has only one queen, which largely determines the unique personality of the colony, Shadis said.

Some colonies are docile, and some are temperamental, Shadis said. Honeybees, however, are the only domestic insect in the world, he said.

If bees are having a productive season, the hive will become overcrowded and the brood, or nest for bee eggs and larvae, will be packed in tightly.

It is at that point the colony of honeybees will begin to search for a new home, Shadis said. Scout bees will go out to search for a new location to accommodate the growing hive. “At a certain point, they decide it’s time for the queen to take the bees and go,” he said.

The honeybee swarm will create a new hive in an enclosure, such as a hollow log or a tree, Shadis said. They usually have a 2-mile flight radius, Shadis said, so the missing swarm will be within 2 miles of Shadis Road, off Cross Point Road, in Edgecomb.

If bees are seen entering or exiting an enclosure, it is a sign the enclosure is home to a bee colony, he said. The honeybee is never too far from its queen, and in order to move the hive from a natural enclosure to a hive managed by a beekeeper, the queen must first be relocated, Shadis said.

Shadis has gone through the process of moving a colony to a new hive before. The bees actually walked, like they were in a bee parade, into the new hive where the queen was located, he said.

In an effort to save the missing swarm, Shadis took out an advertisement in The Lincoln County News. “It was a little goofy,” Shadis said, but with people taking advertisements for missing dogs and cats, he figured it was worth a shot.

The area surrounding his farm is largely wooded, and Shadis is doubtful he will see his swarm again. However, for anyone interested in starting out as a beekeeper, Shadis has offered to help get them established.

Anyone who believes they have spotted the missing bee colony or who is interested in beekeeping is encouraged to contact Ray Shadis at 380-5994.