The Edgecomb Board of Selectmen plans to make a decision regarding the town’s contracted ambulance service at its next meeting, Monday, June 18.

In the current fiscal year, Wiscasset Ambulance Service provided service in Edgecomb at a cost of $3,000. However, Wiscasset wants an increase in the flat rate to $6,500, plus payment of residents’ unpaid bills, which totaled approximately $15,000 in the most recent year.

After receiving this proposal from Wiscasset, the selectmen reached out to Central Lincoln County Ambulance Service to see how much the Damariscotta-based service would charge to provide coverage in Edgecomb. CLC provided a price of $20,000 to serve the town.

At the annual town meeting May 19, voters approved $20,000 for the ambulance service. The article did not specify which agency would provide the service, and the selectmen told residents they planned to interview both.

Wiscasset Selectmen Judy Colby and Jeff Slack met with the Edgecomb selectmen on behalf of the Wiscasset Ambulance Service.

Wiscasset Ambulance Service Director Toby Martin had planned to attend the meeting as well, but was out on an emergency call, Colby said.

The increase of Edgecomb’s contract price resulted from Wiscasset’s desire to equalize the contracts for all the towns the ambulance service covers, and to take some of the burden for the service off Wiscasset taxpayers, Colby said.

“I’ve been a selectman for eight years, and I do not remember raising the rate for Edgecomb or Westport,” Colby said.

The Edgecomb selectmen expressed concern about the legality of the town having to cover residents’ unpaid bills.

Slack and Colby explained the process the ambulance service follows when attempting to collect payments, including the utilization of a collection agency.

Slack gave the example of a person from out of state being in a car accident in Edgecomb. If the individual did not pay his or her bill, Edgecomb would not receive the bill. “There are going to be a certain amount that are going to be uncollectible, no matter what, and we wouldn’t ask the town to pay those,” Slack said. 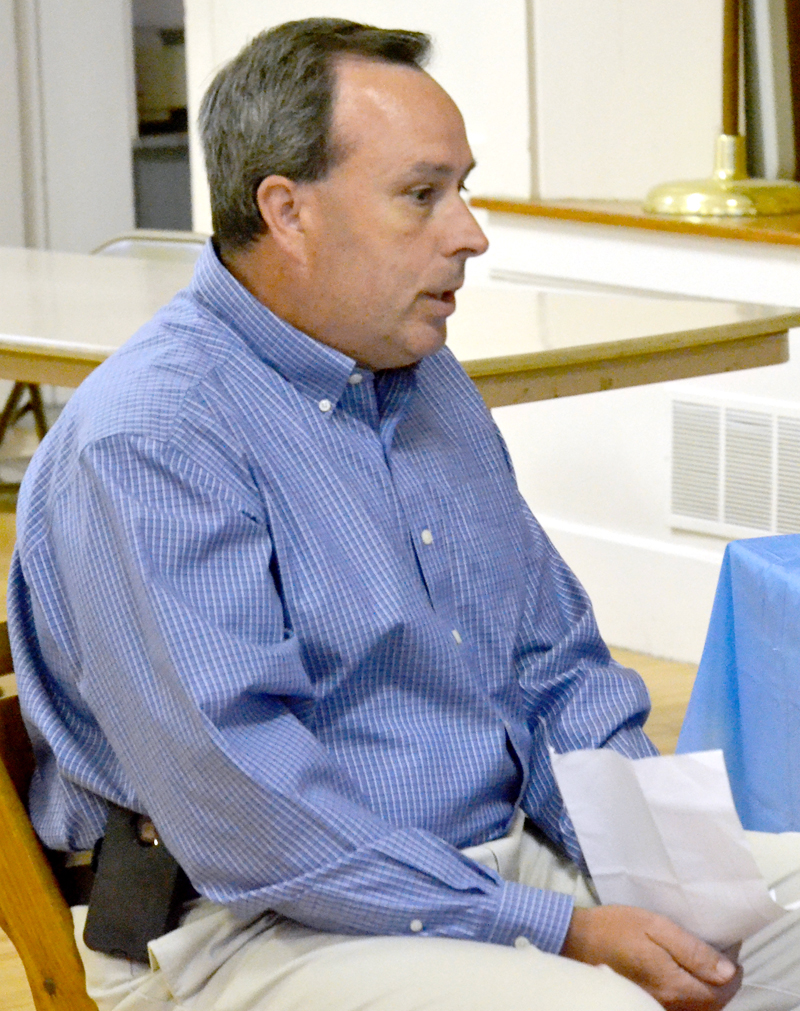 Central Lincoln County Ambulance Service Chief Warren Waltz talks about the service the agency could provide to Edgecomb during a meeting with the Edgecomb Board of Selectmen on Monday, June 4. (Maia Zewert photo)

The Wiscasset Ambulance Service also has a subscription plan residents can sign up for, an offer which “is second to none,” Slack said.

The town of Edgecomb would not receive a bill for residents’ debts until the following fiscal year, Colby said.

Colby said Edgecomb could provide a counteroffer for the Wiscasset Board of Selectmen to consider.

CLC does not offer a subscription plan, but works with patients to arrive at a payment schedule, Waltz said. The ambulance service would not ask Edgecomb to cover its residents’ uncollected bills, Waltz said.

Some “bad debt” is figured into the $20,000 contract, along with vehicle and equipment maintenance, Waltz said.

Edgecomb Fire Chief Roy Potter asked Waltz about the relationship between the ambulance service and first responders on emergency scenes.

Currently, CLC Ambulance Service covers four towns that also have first responders, Waltz said. “We work together. We take a lot of our cues from them, and it only benefits the patient,” he said.

Potter and Edgecomb Fire Department Capt. Tom Trowbridge spoke highly of their experiences with CLC Ambulance on emergency scenes. Neither Potter nor Trowbridge was in attendance during the meeting with Wiscasset Ambulance.

The selectmen said they plan to discuss the issue further and make a decision June 18. The meeting will begin at 6 p.m. in the town hall.