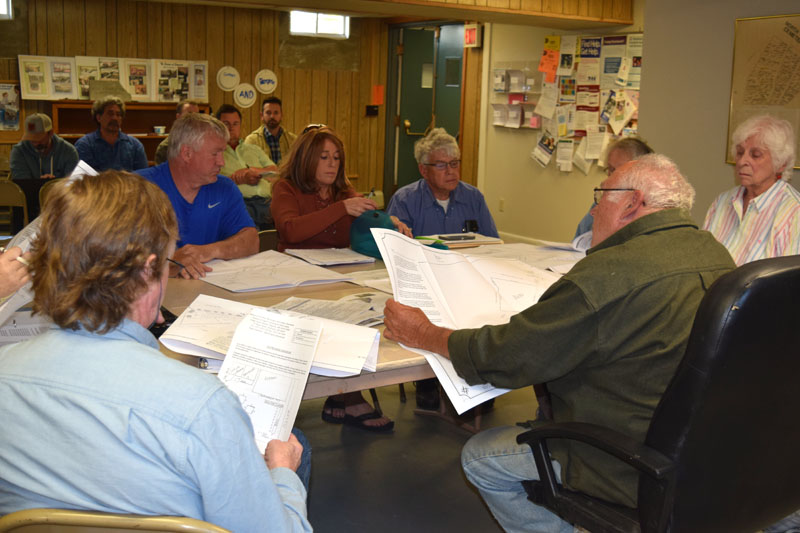 The Edgecomb Planning Board reviews blueprints for a pub on Route 27 during its meeting at the town hall Thursday, May 24. (Jessica Clifford photo)

The Edgecomb Planning Board approved an application for a new pub on Route 27 on Thursday, May 24.

Brian Cookson and Cindy Landry own the property, which was most recently home to Cohen’s Corner General Store. They envision a “restaurant-style” pub.

Before the vote on the application, the board asked questions about the parking lot, building capacity, signage, seating, and the septic system.

Originally, the owners wanted to pave the parking lot and stripe it with parking spots, but they plan to hold off for now.

“We decided against (paving) because we had two estimates done. We’re not going to do that this year,” Landry said. “That was a lot more than we thought it was going to be. That’s maybe a target for next year.”

Board member Gretchen Burleigh-Johnson expressed fear about people entering and exiting the pub with drivers speeding by on Route 27.

Landry and Cookson said they thought of the issue before and decided to create two exits and one entrance for their parking lot. The Maine Department of Transportation approved the plan, Landry said.

In addition, after a plow knocked down their previous enter and exit signs, the owners said they will place larger signs close to the road. The DOT has approved the signage as well, they said.

“We will definitely take care of it, so it is not a danger to any traffic,” Landry said. 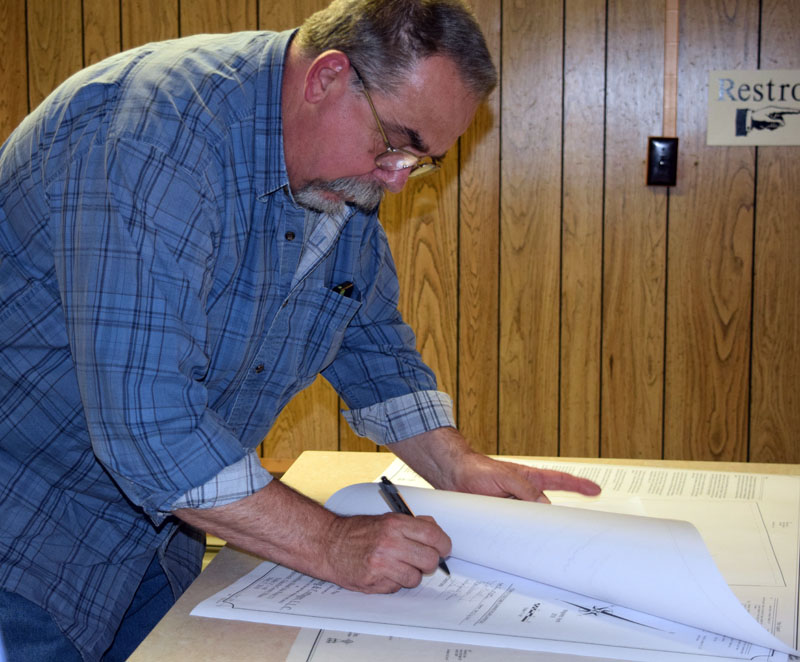 Edgecomb Planning Board alternate Dave Boucher signs the application for a new pub due to open on Route 27. (Jessica Clifford photo)

She said the design of the main sign began with a rustic theme, but has since changed to something brighter and more visible.

The pub will have capacity for 30 people, according to the application. State licensing approves establishments for 29 or fewer individuals or 30 and above, Landry said. To allow for the restaurant and lounge, the owners went with the higher capacity.

The owners will have both a bar with eight stools and a dining area that will seat the remainder of their customers.

With board member Patricia Jeremiah’s absence, alternate board member Dave Boucher took her place. Boucher made a motion to approve the application. New board member Rebecca Graham seconded the motion.

“I feel like I’m a little behind the curve, but can you demonstrate an adequate septic system for 30-plus people?” he said.

Landry said there was an inspection when they bought the property, but she thinks they will need a second inspection.

The pub will have one bathroom and a waterless urinal will be installed, Cookson said.

Landry was told by the state that the septic system might need modifications before being approved, but she does not know of any alterations that should be made.

“I don’t know what the requirements are. I’m just raising that as a question,” Nutt said.

Landry and Cookson did not have the blueprints for the septic system with them at the meeting.

Nutt also asked if the state requires a certain square footage between seats in the restaurant.

The owners did not know the specifics, but said the state suggested a pre-inspection with a health inspector to see what is possible as far as seating.

The board amended the motion to state that the owners need to show a copy of the current septic plan within 14 days of the meeting. In addition, they must meet state standards for the septic system.

The board approved the amended motion and signed the application.

The completion date for the pub is “in limbo until (the owners) hear what the state needs from them,” board Chair Barry Hathorne said in an email.

Before reviewing site plans, the board elected a chair and vice chair for the year ahead. Some members thought the vote should wait because Jeremiah was absent and board member Gretchen Burleigh-Johnson was late.

The board elected Hathorne chair, 3-0-1, with Hathorne abstaining.

The board elected Jeremiah vice chair, 4-0.