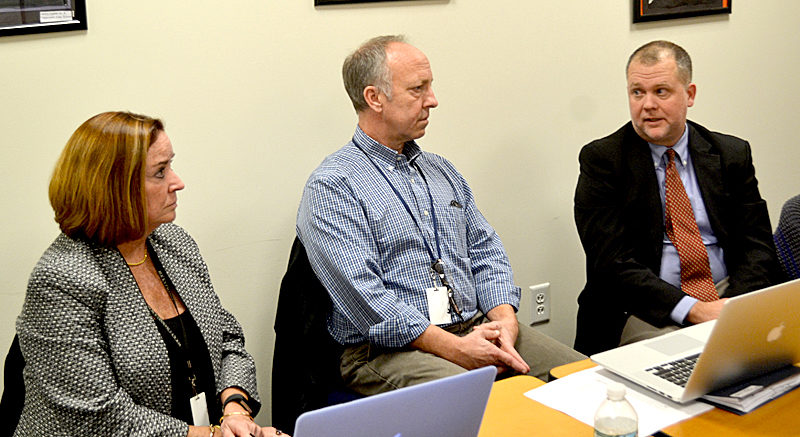 Members of the RSU 12 Board of Directors and the Edgecomb School Committee are putting their heads together to find a joint solution to problems in each school district, and the solution may take the form of a preschool partnership.

RSU 12 has been working to find a way to make its pre-kindergarten program accessible to Alna and Westport Island families, RSU 12 Superintendent Howard Tuttle said. Edgecomb Eddy School and AOS 98 are reaching out to students in school-choice towns to increase enrollment in the district, AOS 98 Superintendent Eileen King said.

RSU 12 Board of Directors members Richard DeVries, of Westport Island; Barbara Baston and Ralph Hilton, of Alna; Chair Jerry Nault, of Windsor; and Tuttle attended an introductory meeting with the Edgecomb School Committee on Monday, Nov. 14.

While the November meeting was meant to be a meet and greet, discussion between the two school districts about potential collaborations date back more than a year. In an effort to reach out to Alna and Westport Island families, both school-choice towns for grades K-12, the Edgecomb Eddy School and Boothbay Region High School sent out multiple mailers and held open houses, King said.

RSU 12 supported the outreach effort to increase the number of choices for families in the district, Tuttle said. The majority of parents of kindergarten students in Alna and Westport Island, however, chose the Center for Teaching and Learning and Juniper Hill School, both private schools, in the 2016-2017 school year, Tuttle said.

Through a multimillion-dollar U.S. Department of Education grant, RSU 12 has been able to open five pre-kindergarten classrooms in its district. However, those classrooms, in Chelsea, Somerville, Whitefield, and Windsor, are difficult for families in Alna and Westport Island to access, Tuttle said.

Previously, RSU 12 and AOS 98 discussed opening an additional preschool classroom at the Edgecomb Eddy School for Westport Island and Alna families. However, the administrators of the U.S. Department of Education grant did not think it would be possible to incorporate an additional school district into the grant, Tuttle said.

Tuttle argued that it would be an additional location, not an additional school district, “but I didn’t get very far,” he said. Tuttle said he is willing to have the conversation again. If the conversation is successful, however, the grant will impose a lot of requirements for the preschool classroom, he said.

It may be easier to receive town approval for a school budget that includes a preschool classroom if the school committee could point to the additional revenue the school would receive in the form of tuition for Westport Island and Alna students, King said.

Currently, school choice does not extend to preschool, Tuttle said. However, it may be possible for RSU 12 to enter into a contract with AOS 98 that says RSU 12 will pay tuition for preschool, but only if students attend pre-K at the Edgecomb Eddy School, he said.

Busing will be a major factor in AOS 98 becoming a viable option for school-choice families in RSU 12, DeVries said. RSU 12 currently pays for two buses to transport students to Wiscasset, but the number of RSU 12 students attending Wiscasset schools is declining, Tuttle said.

If RSU 12 revises its current bus routes, or if AOS 98 sends a bus through Alna or Westport Island, AOS 98 may be able to capture more school-choice students, Tuttle said. AOS 98 is already exploring the matter, King said.

A Boothbay bus was sent through Alna to see if the timing of the bus route and the school schedule worked, and it did, King said.