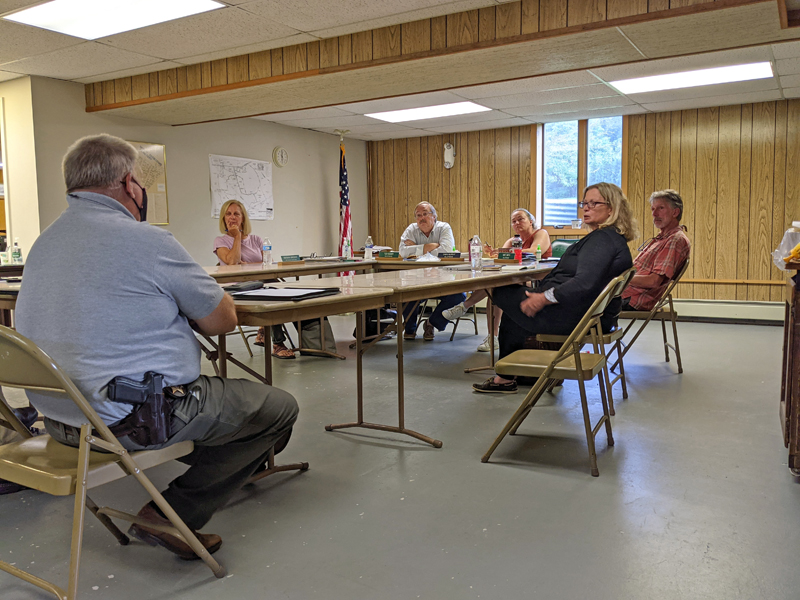 The Edgecomb Board of Selectmen met with state Rep. Holly Stover, D-Boothbay, and Lincoln County Sheriff Todd Brackett on Monday, July 12 to discuss issues related to construction on the intersection of Route 27 and Route 1.

On Thursday, July 8, board Chair Dawn Murray sent an email to Stover and state Sen. Chloe Maxmin, D-Nobleboro, as well as Maine Department of Transportation Project Manager Ernie Martin requesting their attendance at the Monday meeting to discuss “untenable” traffic issues on Eddy Road and Route 27.

The DOT project under discussion involves installing a protected lane and islands at the intersection to allow easier access for traffic merging. Additionally, the DOT will remove ledge abutting Eddy Road to widen it and improve traffic safety.

Contractors began work at the Route 1 intersection with Route 27 during the second week of June, a significant delay from earlier projected start dates in the spring.

Stover was the only one of the three invitees in attendance at the meeting; Murray said that Martin had told her he could not attend in advance and that he would follow-up with the selectmen on Tuesday.

Murray expressed her concerns regarding the excessive traffic on Route 1 and Eddy Road, which is often used as a way to bypass the intersection of Route 1 and Route 27, and also noted that Martin had not yet found a way to get approval for “Local Traffic Only” signs on Eddy Road, which the selectmen unanimously voted in support of with Martin’s recommendation.

In press release sent Monday, July 12, the DOT asked drivers to use caution passing through the work zone at the intersection and the Eddy Road, noting that on-site crews have had some “close calls.”

Murray said that Karen Libby, the project resident, told her that work on the Eddy Road would start at the end of July and that blasting of some of the ledge which abuts the road would mean that the road would be completely closed at times, and Murray was similarly concerned with the degree to which this would impact general and local traffic.

Selectman Ted Hugger said that the selectmen have gotten “consistently inaccurate” information from DOT, citing an instance in which an environmental embargo was placed on the project due to the presence of what was thought to be a stream that was in danger of being contaminated by the construction zone, but actually turned out to be a well. 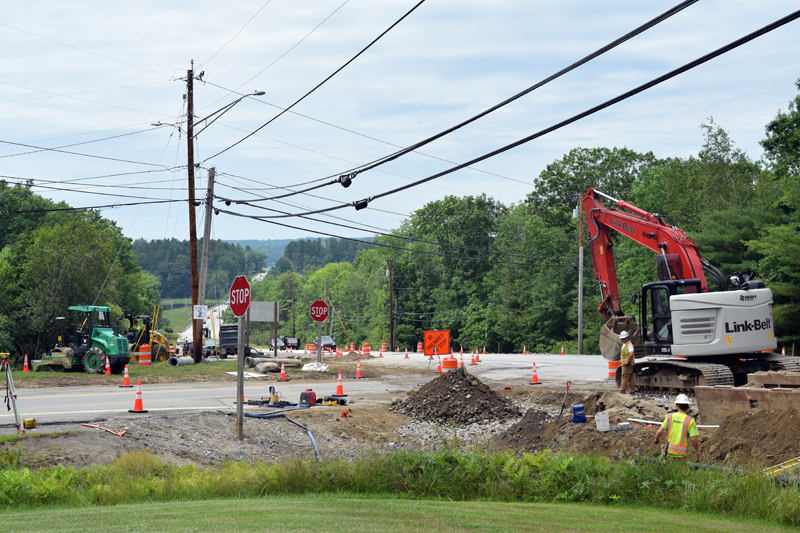 A construction crew works on the Maine Department of Transportation project at the intersection of Route 1 and Route 27 on Tuesday, July 13. The project involves installing a protected lane and islands at the intersection to allow easier access for traffic merging. (Nate Poole photo)

“They wasted months of time doing this, so I don’t believe a word they say,” Hugger said.

Stover acknowledged Murray’s concerns regarding the excessive traffic and told the selectmen that she had been in contact with Martin and DOT Commissioner’s Assistant Megan Russo regarding the issues. Stover, who lives in Boothbay, also expressed concerns over the state of Route 27 itself.

“Route 27 is falling apart. It’s crap, it’s broken, it’s crumbling, and the number … of accidents that I have seen on Route 27, from all the way down, is unprecedented to me,” Stover said.

Stover suggested that DOT should direct funds from the American Rescue Plan Act toward repaving Route 27 as soon as possible, rather than in two years, as is currently planned. She said that she recognized that the condition of Route 27 and the delays on Eddy Road and Route 1 are separate issues, but said that they are also interrelated.

Stover asked Brackett if he had noticed any increases in the reports of problems on Route 27 or Eddy Road. Brackett said that he hadn’t encountered any significant complaints this year about the Eddy Road or anything out of the ordinary on Route 27.

However, Brackett did note that accident data does not speak to traffic volume.

“I think we all know traffic volume is crazy, it’s really up,” Brackett said.

The sheriff offered to temporarily place digital signs near the Eddy Road reading “Local Traffic Only” that would also keep an unofficial count of traffic, and the selectmen unanimously expressed their assent to the sheriff’s offer.

Selectman Mike Smith stressed that the selectmen, and everyone in Edgecomb, need to be patient with the admittedly difficult project.

“Just remember, every day… it’s going to get closer to completion. That’s one thing Ernie did say to us is patience, we got to have patience. We’re doing the best we can,” Smith said.

In other news, the selectmen agreed to unofficially set the date for the next public forum at 9 a.m. on Saturday, Aug. 21. The forum will be an opportunity for Edgecomb residents to discuss key issues facing the town with their selectmen. Smith said that, in particular, he would like to pursue discussions of adding an additional administrative position in the town office.

The selectmen also voted 3-0 in favor of allowing public use of the town office and returning to pre-pandemic policies for the building. The selectmen also approved a request from Edgecomb residents Melissa and Irving Locke for an easement on town property on McKay Road to get power to their property.

The selectmen will next meet on Monday, July 26 at 6 p.m. in the town office.