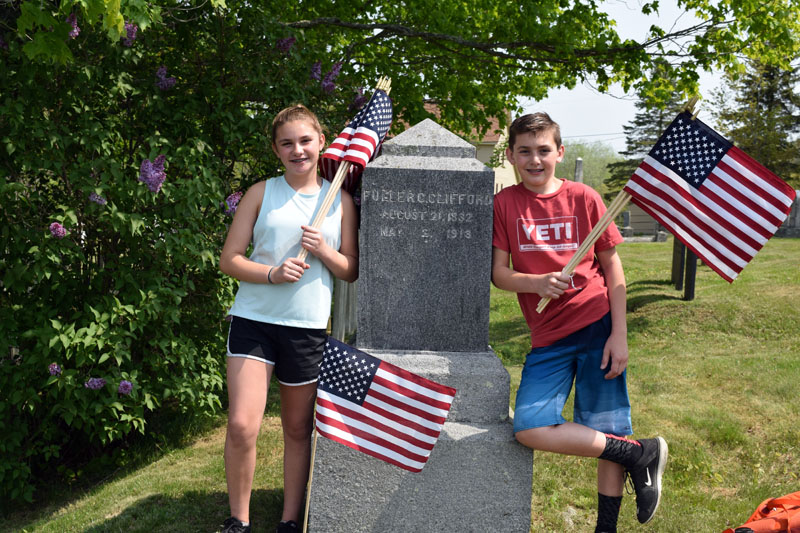 Edgecomb Eddy School sixth-graders and twins Catherine and William Clifford helped decorate veterans’ graves in North Cemetery on Friday, May 25, including the grave of Fuller C. Clifford. The twins did not know if he was an ancestor, but were excited to find their family name. (Jessica Clifford photo)

Edgecomb Eddy School sixth-graders worked with the Edgecomb Board of Selectmen to decorate veterans’ graves in North Cemetery, next to the town hall, on Friday, May 25.

The selectmen and the students placed flags on graves dating as far back as the 1700s.

Every year, the selectmen place flags at seven cemeteries in Edgecomb.

Two years ago, the selectmen invited students to help them with one of the cemeteries. Selectman Ted Hugger contacted then-Eddy School teacher Terry Mulligan to schedule the activity. Now, the selectmen feel it has become a tradition.

“We started it last year because we thought it would be a good way to teach the kids a little bit about local history and help them understand what veterans are and were and have done,” Hugger said.

Nine of the school’s 10 sixth-graders participated in the event, placing flags at more than 30 gravestones.

“Sixth-graders are old enough to understand what they are seeing, and in sixth grade, you deserve a little outing,” Hugger said.

Students took a bundle of flags and located veterans’ graves by spotting the metal flag holders beside the graves.

Edgecomb Eddy School Principal Ira Michaud and sixth-grade teacher Julie Browne participated in the event, walking around with their students.

“It’s good practice,” Michaud said. “It’s not often folks slow down and think about the history of those who came before them.”

Many students who have relatives from the area saw gravestones inscribed with their last names and wondered if they had found the resting places of ancestors.

Twins Catherine and William Clifford were excited to find a gravestone with their last name in the cemetery, though they were not sure if they were related to the person.

Other students were remembering relatives who served in the military.

Finn Gaffney was thinking about his great-grandfather, Bill Ross, who served in World War II and died five years ago.

Luke Morley was thinking about his great-grandfather, Leroy, another WWII veteran, who died this year.

“I remember the respect that we should give to all these men who have fought for our country and given our country freedom,” Morley said.

After the placing of the flags, the selectmen served lunch while Selectman Mike Smith gave the students a history lesson.

“There are a lot of people buried in several cemeteries throughout this town that were involved in not only the Revolutionary War, but the Civil War, the Aroostook War, World War II, World War I, Korea, and Vietnam,” Smith said.