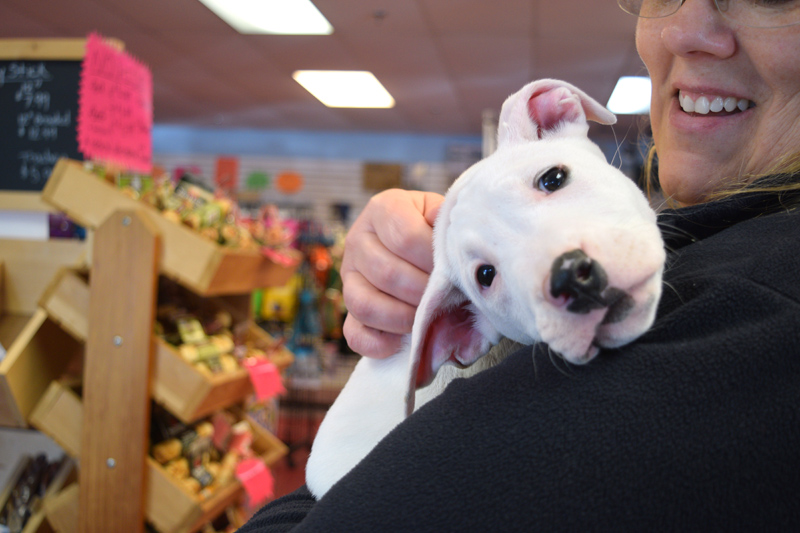 Midcoast Humane’s Edgecomb campus, known for being a full-service animal shelter since 1987, has stopped on-site adoption but will continue to service towns via off-site pop-up adoption events called “mobile events.”

The organization’s first mobile event was hosted from 10 a.m. to 2 p.m. Saturday, Dec. 15 at The Animal House in Damariscotta. A total of 12 dogs and four cats were available for adoption, most of which were taken to new homes by the end of the day.

The Edgecomb facility is now a surrender and animal-care facility only. “It’s a fancy term for ‘this is the building where animals who are not quite yet adoptable come,’” Trendy Stanchfield, the executive director of Midcoast Humane, said in a recent interview. “This is sort of a ‘start-point one.’”

Most animals surrendered to Midcoast Humane — such as stray, sick, injured, or transported animals — must sit for a holding period before becoming adoptable. Community members will not be able to visit the animals, but there are some exceptions to the rule. The site could be used for meet-and-greets if someone is unable to go to Midcoast Humane’s Brunswick campus.

A person surrendering an animal at the Edgecomb campus must call the location to set up an appointment first.

Midcoast Humane’s Edgecomb campus was formerly called Lincoln County Animal Shelter. Before that, it was Boothbay Region Humane Society, an organization founded by community members in 1959, caring for stray and abandoned animals in Lincoln and Sagadahoc counties.

The shelter has served the public at its current location, 27 Atlantic Highway in Edgecomb, since 1987.

In 2015, Coastal Humane Society took over the operations of the Edgecomb shelter and merged with the Brunswick Area Humane Society later the same year.

Stanchfield started her position as executive director at Midcoast Humane in January and has been working to find innovative ways to make a more sustainable business of Midcoast Humane overall.

This year, Stanchfield received feedback from people in the community about what the organization could do differently. “Some folks didn’t even know we were still open,” she said.

Another issue was the shelter’s accessibility.

“Some of the feedback I’ve gotten over the past year was the hours don’t match up with when people can get here to meet (the animals),” she said.

However, Midcoast Humane cannot afford to open its doors on more days than it currently does or add more hours. It costs $6,000 to keep the entire agency open for a single day, Stanchfield said.

Budgeting can be difficult, too, with unpredictable financial impacts. In August, Midcoast Maine was given 44 dogs seized from a Brunswick breeder. Stanchfield said that the acquisition of those animals resulted in approximately a $71,000 expense for the agency.

Stanchfield noted that Midcoast Humane gets income from adoption services and donations. “It’s out of necessity,” Stanchfield said of changing the organization’s business model. “We will be out of business if we do not figure out how to flip the way we do business.”

However, she said this is not a Lincoln County-specific issue.

“The whole future of sheltering is changing in general and one of the ideas is taking it mobile,” Stanchfield said, adding that “mobile service is not new to the human service world, and so bringing it to the animal service world is not as scary as I think everybody is presuming.”

The change to mobile events is needed to help bring animals closer to potential adopters at better times for community members. Dogs, cats, and other small animals in pop-up cages are placed onto vans for field trips to shops like Ames True Value Hardware & Supply in Wiscasset or The Animal House in Damariscotta for potential adoption.

The animals come from both the Edgecomb and Brunswick campuses of Midcoast Humane, Stanchfield said. People can adopt an animal on the spot. It is the same process as it was when the animals were adopted in-house, she said.

Most of the events will take place at locations east of Bath, mostly in Lincoln County towns. Stanchfield said events will be held in this area because there is less accessibility to adoptable animals in comparison to the southern towns in the territory Midcoast Humane covers.

Most of Midcoast Humane’s partner locations will be places where a person can buy the items necessary for owning an animal and ask advice from staff. “It’s kind of a one-stop shop,” Stanchfield said.

Mobile events are scheduled for different times and days of the week to give more people a chance to see the animals.

Ten events have already been scheduled for 2019, Stanchfield said.

A variety of animals of various species, sizes, and ages will be at every event. However, it is not possible to predict months before an event which animals will be available.

Mobile adoption events have been done at big-box locations like Petco, Stanchfield said, a precedent that helped make the switch to mobile-only events in the Lincoln County area more feasible.

Nov. 5 was the switchover day at the Edgecomb campus from adoption to strictly animal-care facility. The decision was not made overnight, Stanchfield said.

Stanchfield said that before any decision was made, she spoke with people at all levels of Midcoast Humane — its board of directors, local shelters, the ASPCA, and The Humane Society of the United States.

Community members still have the opportunity to volunteer at the Edgecomb campus and, now, at the mobile events.

At the Edgecomb campus, people can walk dogs, do some animal care, help with yard cleanups and donation pickups in the warmer months, and do administrative tasks.

People can help out staff at mobile events by watching over the animals.

“We’re getting to a place that we have more strategic positions for folks,” Stanchfield said. “That’s been hard, because we’ve had folks volunteering for decades (and) now their volunteering is changing.” Community members that want to volunteer must undergo training so volunteers and staff are comfortable taking care of the animals, she said.

To sign up to volunteer, go to midcoasthumane.org, find the “Volunteer” tab, and fill out the prompts.

“It’s going to take some time for people to understand that (this) model is a more sustainable, better one,” Stanchfield said of the changes. “Nothing else went away — we’re not closing the doors, we’re not letting a bunch of staff go. We are still here to serve Lincoln County and residents as we’ve always been.”