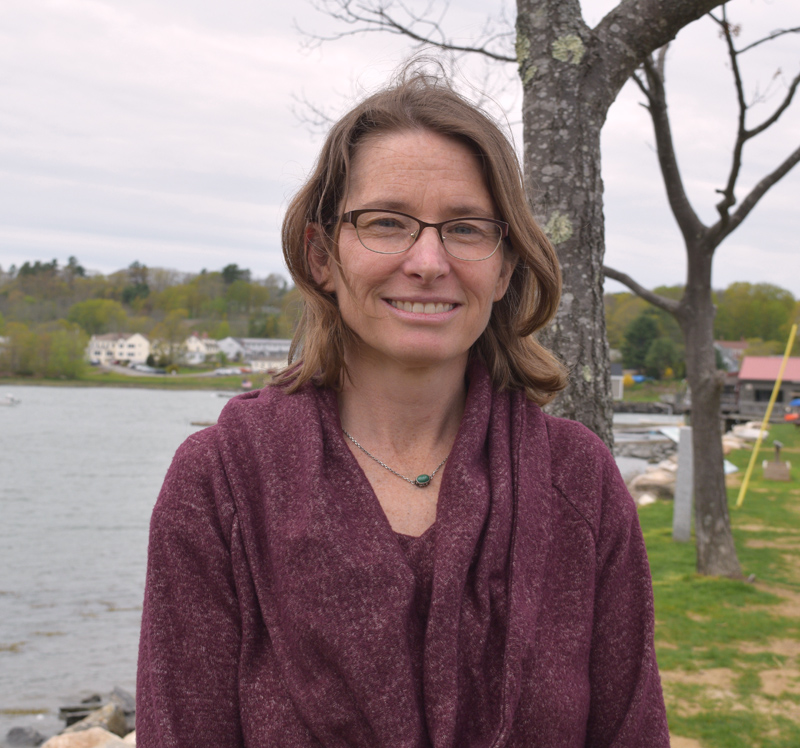 An Edgecomb woman became an ordained interfaith minister Sunday, June 2 after completing a two-year program, including 150 hours each of community service and an internship.

Lisa Steele-Maley, 46, decided to become an interfaith minister after her father’s death and through writing a book on her experience as his caregiver. She soon discovered the Chaplaincy Institute of Maine, a professional certificate-granting institution for interfaith chaplaincy.

According to the Chaplaincy Institute of Maine, “Interfaith is an avenue of seeing and seeking the endless possibilities of Divine expression. Interfaith ministry respects all spiritual paths including ‘no path’ and honors Divine wisdom in all faiths.”

Other names for an interfaith minister include community minister or community chaplain, Steele-Maley said.

“An interfaith minister might fill a role of paying attention to the spiritual care and to the spiritual life of an individual or a community, but oftentimes without a gathering place of a church,” she said.

After World War II, Rabbi Joseph Gelberman, a Hasidic Jew from Hungary, became the founder of the first interfaith school in the U.S., according to the Chaplaincy Institute of Maine.

Gelberman lost his entire family, including his 3-year-old daughter, in the Holocaust.

He established The New Seminary in New York with the idea that interfaith teachings could promote understanding between various spiritual traditions and prevent another Holocaust.

In addition, an interfaith minister can play a role in helping people who do not identify as religious, but instead as spiritual.

“An interfaith minister could be of use to those people in times of transition, challenges, or joys,” Steele-Maley said, referring to births, deaths, weddings, and other events.

Before entering the program at the Chaplaincy Institute, Steele-Maley worked for The Leadership School at Kieve-Wavus Education Inc., an educational nonprofit based in Lincoln County.

While Steele-Maley was working, her father was declining in health due to dementia. She began supporting him and slowly transitioned into a caregiver.

Steele-Maley supported her father for five years until he died in December 2016. “It was clear to me that going back into the typical work world that I had been in was not going to be satisfying,” she said.

Steele-Maley began expressing her experience as her father’s caregiver in what she referred to as “cathartic” writing. She wanted to share her writings through a book.

“I learned about (the Chaplaincy Institute of Maine) for the very first time at the same time I was in the depth of my grief, and I was like, ‘Maybe that’ll show me what to do with this broken heart,’” she said.

By March 2017, she had applied for the program and finished writing a first draft of her memoir.

Steele-Maley was accepted to the program after two interviews and started classes in September 2017.

In October of the same year she found a publisher for her book, “Without a Map: A Caregiver’s Journey Through the Wilderness of Heart and Mind.”

The book focuses on the five years she supported her father and how their relationship changed.

In June 2018, her book was published. It can be purchased at Sherman’s Maine Coast Book Shop or ordered if it is not in stock.

During the chaplaincy program, Steele-Maley went to classes once a week for three hours and one full weekend per month. She also met with a designated alumnus of the program monthly.

As in college classes, Steele-Maley was required to do extensive reading and write papers.

“What I’ve appreciated about the program is, (it’s) a combination of academic theoretical learning and personal exploration,” she said.

“One month we are studying Buddhism and the next month we’re studying Islam. Meanwhile, we are out in the world for a week in between those two classes and all of the ideas are swirling around and finding places to land in our lived experience,” she said.

The first year of the program focused on students’ personal experiences with spirituality and religion, while the second year focused on the act of helping others. At various times along the way, students learned about the tenets of various religions.

“I was raised Episcopalian but can probably best be described as a spiritual seeker most of my adult life,” Steele-Maley said of her religious background. “I have attended Midcoast Friends Meeting (Quaker) since moving to Maine.”

In addition to her classes, Steele-Maley was required to perform 150 hours of volunteer service the first year. She chose to volunteer with Inn Along the Way, a Damariscotta nonprofit that intends to offer older adults and caregivers housing in an interdependent neighborhood.

Steele-Maley said she welcomed the public, wrote grants, and offered programs such as a holiday grief workshop.

“She did a really good job working in collaboration with what we were doing to bring Inn Along the Way from a vision to a reality,” Sherry Flint, board president for Inn Along the Way, said.

“Certainly a big part of that was the grant writing. Parallel to that was the caregiving piece,” Flint said. “She was available and here for caregivers who needed a break to support them.”

During the second year of the program, Steele-Maley had to complete a 150-hour internship focusing on one organization or effort she is passionate about. For most of her internship, she chose to work at the Portland-based nonprofit Renewal in the Wilderness, which offers programs to give people in caregiving professions an opportunity to feel rested in nature.

Steele-Maley said she helped the staff and the organization’s board of directors identify and develop new program and partnership opportunities.

When her internship ended, she stepped into the position of president of the organization’s board of directors.

Now that she has completed her program, along with 16 others at the Chaplaincy Institute of Maine, Steele-Maley said she sees her work as an interfaith minister as open-ended.

“I’m looking forward to taking some time over the course of the summer to let the last two years settle in a bit deeper,” she said.

She would like to be a caring, one-on-one presence for anyone experiencing a transition and to offer group workshops at local nonprofits. She imagines offering workshops and support for organizations going through transition by giving people an opportunity to reflect, envision possibilities, and establish an action plan for the future.

Steele-Maley’s ordination was Sunday, at the First Parish Congregational Church in Saco.

“Ordination was beautiful. It reflected the diversity of faiths and beliefs in the class and in the wider community,” she said. “It also offered opportunities for each ordained to demonstrate how his or her faith manifests as commitment to service in the world.”