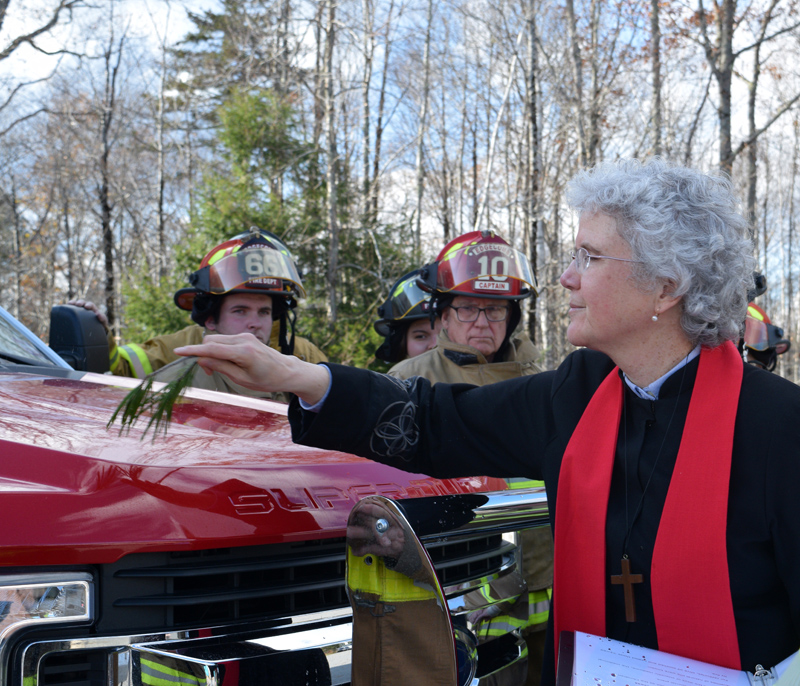 The Rev. Katherine Pinkham, chaplain of the Edgecomb Fire Department, blesses Squad 4 with a pine branch and water as firefighters look on during a ceremony at the station Sunday, Nov. 3. (Jessica Clifford photo)

The chaplain of the Edgecomb Fire Department blessed the department’s new truck during a ceremony Sunday, Nov. 3.

The “fast-attack” truck, dubbed Squad 4, was put into service earlier this year. According to Edgecomb Fire Chief Roy Potter, it is the first brand-new truck purchased for the department since he became chief in 2008.

He wanted to honor that by participating in the traditional blessing.

The Rev. Katherine Pinkham, who is also the pastor of Edgecomb Community Church, gave the blessing. She said it was her first time blessing a fire truck.

“I feel so honored to be able to do it,” she said. “This is a nice group of people. They work hard and are very dedicated.”

The town’s fire personnel, dressed in full gear, encircled the truck outside the fire station for the ceremony.

Potter spoke a few words about Squad 4 before Pinkham began.

According to Potter, it took the department around five years to decide what kind of truck would be the best fit.

“We put together a truck committee and put a lot of hours in, arguing back and forth as to what’s going to work and what wasn’t going to work,” he said.

Pinkham then began the traditional blessing.

“When we talk about blessings, sometimes we are also brought into the company of those we cannot immediately see – the firefighters who preceded you, who called for divine help as they met the challenges of firefighting during their time,” Pinkham said, before asking everyone to observe a moment of silence for firefighters who have died.

“From the Christian, Islamic, and Jewish traditions, we take water for blessings and we use it to make other items sacred,” Pinkham said.

She walked around the truck, dipping a small pine branch in a bowl of water and sprinkling the water on the truck.

Pinkham blessed the truck and the current and future crews who will use it.

She then dipped her thumb into olive oil to trace the Maltese cross, which is part of the Maine State Federation of Firefighters logo, on the driver’s side window of the truck.

“Ground them in an awareness of their special calling, to help them leave behind any differences and focus on teamwork, integrity, and concern for the suffering,” Pinkham said.

All the firefighters and others in attendance at the ceremony were asked to place their hands on the truck for the remainder of the blessing.

To end the ceremony, Pinkham had firefighters push the truck into the fire station.