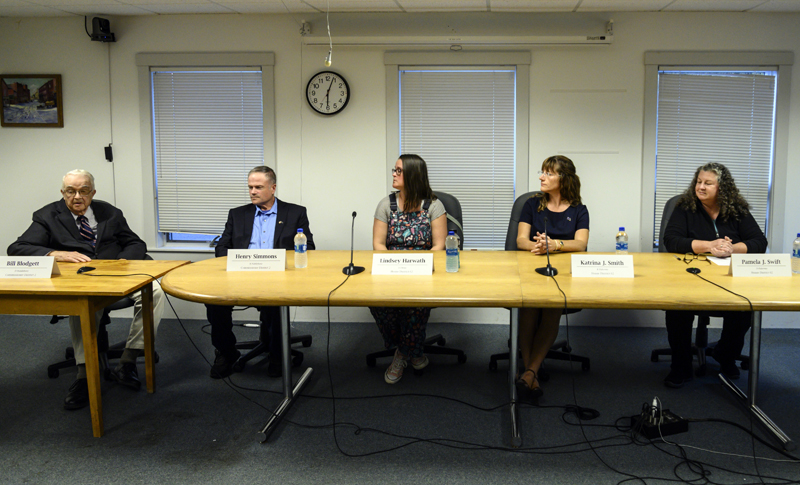 Candidates for Maine House of Representatives and the Lincoln County Board of Commissioners discussed education, business issues, and housing during the third of four political forums hosted by The Lincoln County News ahead of the Tuesday, Nov. 8 election.

The forum was moderated by The Lincoln County News Acting Editor Maia Zewert.

Discussing education, Swift said the state’s current funding method leaves students in poor communities at a disadvantage. “One of the real downfalls … is the amount of money each school gets depends on zip code and the property taxes for that town, so children that live in less wealthy towns don’t have quite the same educational experience,” Swift said. “I think it might be time to think about taking the funding of schools out of just the town and make it more of a federal program to make it equitable for all.” 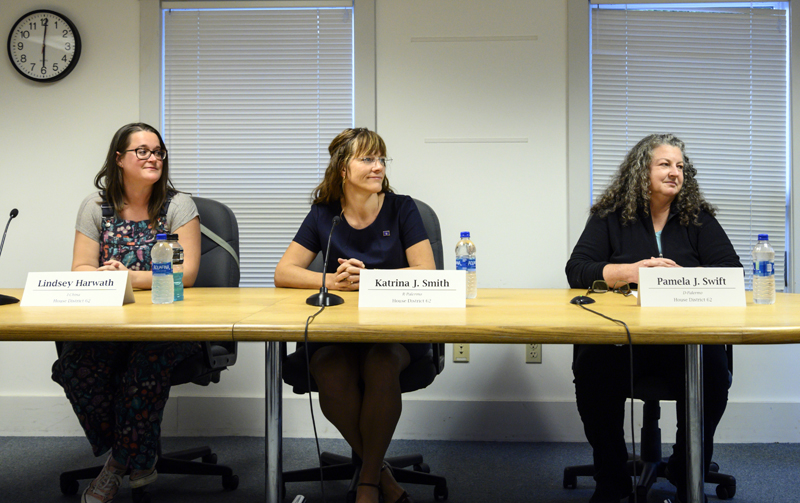 Harwath said her interest in education motivated her to run for office, and cited support for teachers as her primary concern. “Educators and staff need to be supported,” Harwath said. “I still don’t think the minimum (salary) set by the state, the minimum for educator, I still don’t think it is enough for the job we have pushed onto them. I think we should look at doing away with standardized testing. They are doing two weeks of testing plus all the teaching, just to teach them the test. That’s like four weeks of school they could have taught them something else.”

“Tonight at the RSU school meeting they are arguing about a book called “Gender Queer” … why are we arguing about it?” Smith said. “I think we need to have standards for teachers. (Gubernatorial candidate Paul) LePage talks about private schools and school choice, and giving people the money. Again, I hate to see our (public) schools shut down like that, but if they aren’t going to take a step back and focus on education, then we’ll go in that direction.” 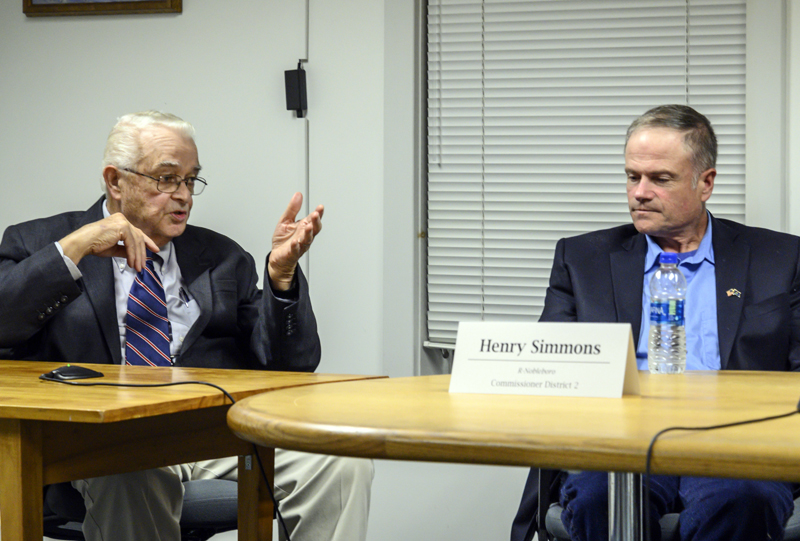 When asked, county commissioner candidates Blodgett and Simmons said they were unsure how to address the staffing shortages facing first responders throughout the county. Blodgett said he is aware the county could take control of the municipal fire departments, but said he wasn’t sold on the idea.

“Some people say the answer is to do what they do outside New England where they are county-run and full-time fire departments,” Blodgett said. “I hesitate in going down that route. Being a county commissioner, it would fall on us to take that responsibility. I would not look forward to doing that. That’s a totally new game.”

Simmons said the volunteer community is struggling and a lack of funding is one of the reasons first responders are short-staffed.

“This specifically, I don’t know,” he said. “It seems to be a post-pandemic issue with trying to find help and it goes along with a lot of the volunteer organizations, animal shelters, and other such things. If we could come up with millions upon millions of dollars to start paying that would be great, but I don’t think we do.”

All of the candidates were asked how they could support local businesses trying to reopen following COVID-19 lockdowns. 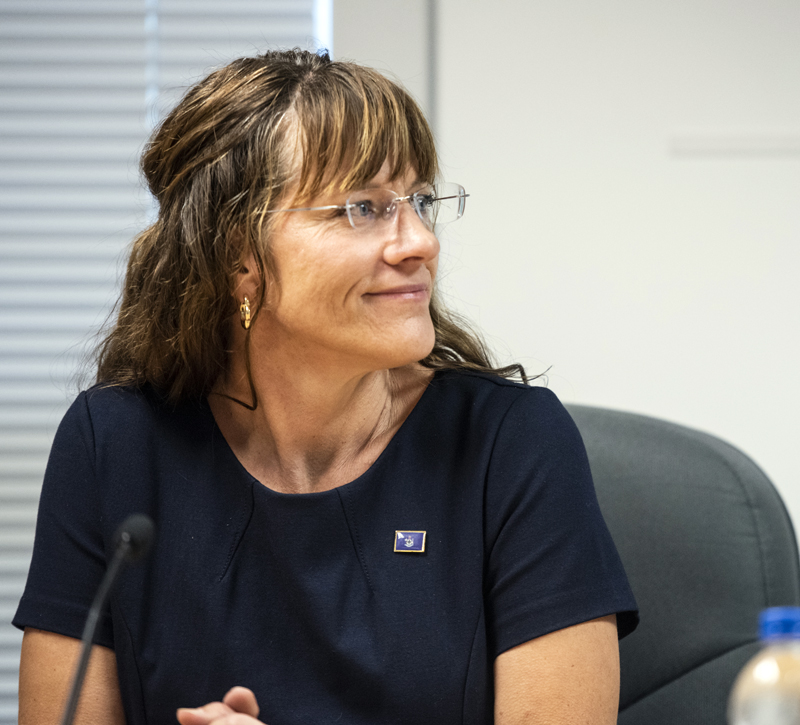 Simmons suggested county taxes and regulations might be discouraging business growth. “I fall back to being mindful of regulations and property taxes,” Simmons said. “It’s how county government assesses. I am not exactly sure what can be done beyond that. I would like to get more educated on that, but at the county level I am not sure.”

Blodgett advocated for improving broadband infrastructure as a way to support local businesses and pointed to current funding programs the county has available.

“We’ve had the subject brought up and that’s the broadband issue, which is new, relatively new here in Maine,” Blodgett said. “Lincoln County has a plan now to encourage broadband by giving or cooperating with towns when they appropriate so much money for the broadband program, with the state and other sources. Lincoln County will match what they raise.”

Smith criticized the government for shutting down the economy and advocated for financial support for businesses. “I would be remiss not to mention the last two years and what happened to our businesses here in Maine. When they were shut down and squeezed to death and put out of business, that tanked our economy,” Smith said. “People who had businesses, were amazing business people with amazing restaurants and stores are gone. I believe that they should have an incentive to go back to work, to reopen businesses … maybe we can pay their rent for a year.”

Harwath said she would be an advocate for workers and supported bringing the “right” kind of businesses to Maine. 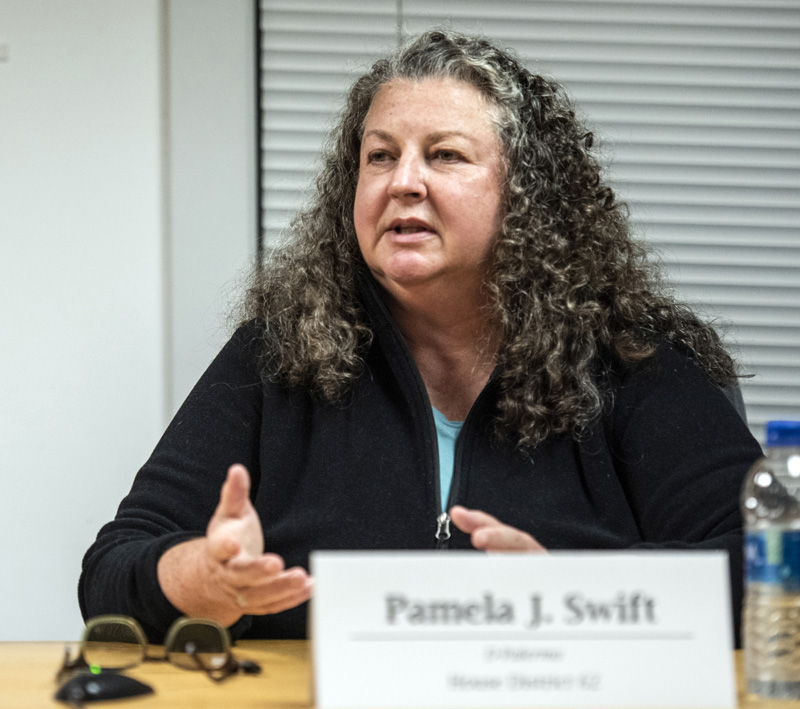 “While I think having more businesses in Maine is a good idea, I would rather have businesses that support their workers and pay them a decent wage,” Harwath said. “If we have 500 more dollar stores I couldn’t care less. Those people do not make enough money to live. Not all businesses are the same. I would like to encourage the right kind of businesses to be here.”

Swift said the pandemic highlighted the need to invest in broadband development so individuals had opportunities to work from home.

“One thing the pandemic made very clear is how important broadband is to rural Maine,” Swift said. “The importance of high-speed internet, number one, is the advantages; it opens up opportunities for economic development in the town. People can live where they want to live and work from home. It opens up the world as your marketplace, and it keeps young families in rural Maine, which is what our communities need to stay viable.”

On the subject of the housing availability and affordability, the candidates offered different ideas on how to tackle the issue.

At the current rate homes are being built in Maine, it will take 20 years before enough homes are available for the families that need them now, Harwath said. She said the state can identify communities that need housing and suggested calling on the National Guard to help. 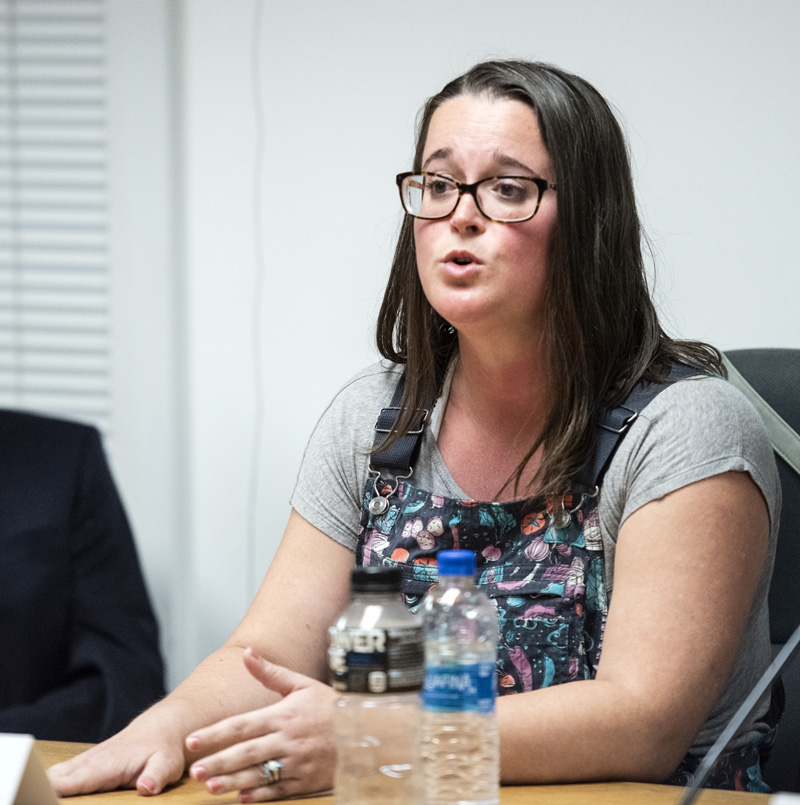 Lindsey Harwath, I-China, speaks to her intent to work on behalf of voters without being tied to party politics during a candidates forum in Waldoboro Thursday, Oct. 6. (Bisi Cameron Yee photo)

“You can create a task force that brings together qualified builders and contractors and then work with the people in those communities that need housing the most to hire the people to build those houses,” Harwath said. “I also think we have a fantastic resource in the National Guard. That’s a great way to get service members to help their local communities.”

Agreeing there is a housing crisis, Smith said businesses are a solution and argued less legislation and good paying jobs would lead to more housing.

“Businesses are the key to homeownership, to healthcare, to childcare; the answer to a lot of our problems,” Smith said. “We can reduce legislation and road blocks to people building homes, to apartment buildings, to stop the middle income people from taking all the lower income housing.”

“There is not just one answer to this problem because different towns have different needs,” Swift said. “The Legislature’s responsibility is to incentivize private and public partnerships to build the needs specific to each areas.” 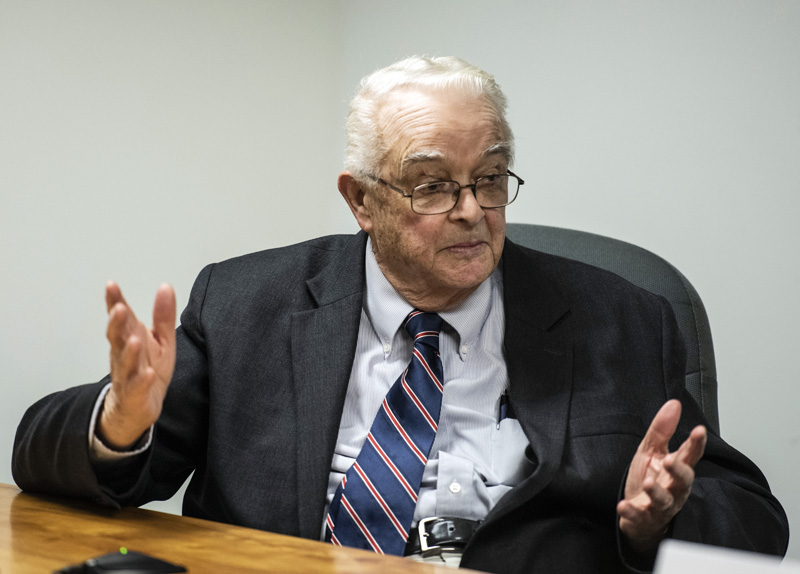 Speaking to the county’s needs, Blodgett advocated for single family and multi-family housing. “Single family and multi-family is very badly needed, especially along the coastal areas because these coastal communities are being gobbled up,” Blodgett said. “This is where we got to find some sort of a solution to how housing can be made available if people are going to be able to stay here and work here.”

Simmons suggested looking at county level regulations as a possible solution to the housing issue. “I think one of the big areas that we can try to be mindful of is on that budget and try to keep a plateau on the property taxes,” Simmons said.  “I know that’s only part of it. It’s a fraction. We need to watch regulations and regulatory issues.” 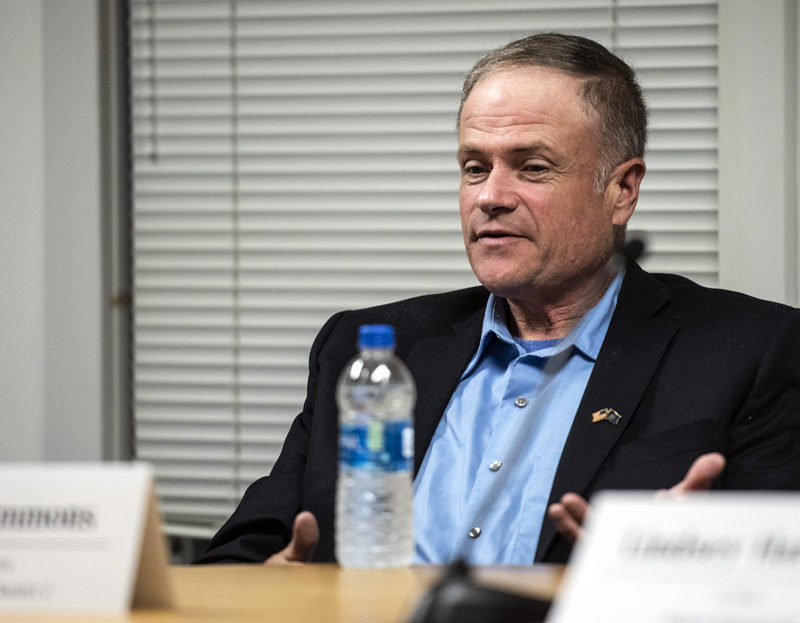 The forum was recorded and can be viewed online at The Lincoln County News’ Facebook page.