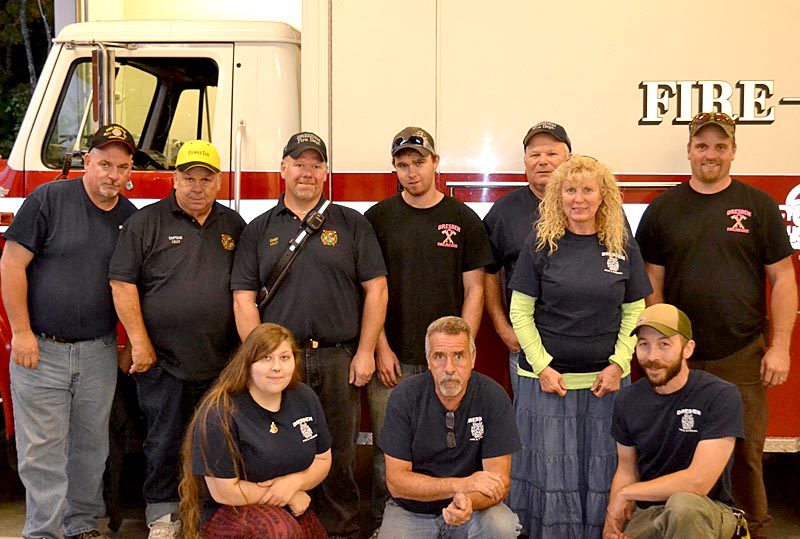 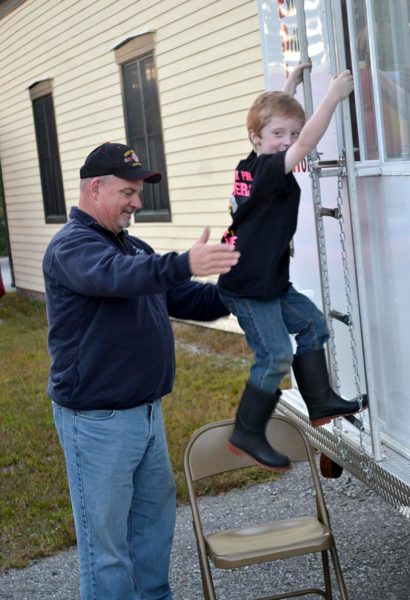 After a week of back-to-back calls, including a rollover, a major structure fire that displaced 13 people, and a kitchen fire in Richmond that displaced one, the Dresden Fire Department opened its doors to the community Wednesday, Oct. 5 for its annual open house.

The event focused on education about fire safety, and community members, mutual aid partners, law enforcement officials, and other emergency responders came out in force to show their support to the department.

Members of the Dresden Fire Department went to Dresden Elementary School during the day to talk about fire prevention and safety education, help conduct a fire drill, and talk about the work of the volunteer department.

The lessons continued into the evening. As kids enjoyed hamburgers and hot dogs fresh from the grill and bounced into each other in a bouncy castle, they also learned how to safely escape a structure fire by crawling through Damariscotta’s educational smoke trailer.

In addition, kids donned backpacks and helmets and grabbed hoses to battle mock flames painted on a wooden cut-out of a house.

Isabella Alley, one of the children at the event, learned to always call 911 in an emergency; to stop, drop, and roll when on fire; and to not be scared of firefighters with masks on if they enter a house on fire to search for someone trapped inside.

“It’s something you take for granted. You don’t really think about it until it happens to you,” Taylor Alley said. “Since then, we’ve come to every open house.”

“It was a great time and the kids did a wonderful job” during the fire drill, Sonia Lilly said.

According to a post on the Dresden Fire and Rescue Facebook page, firefighters entered a classroom with their helmets on and children were surprised to see that some of the firefighters were girls.

“It was priceless … just one of those special moments” when the teacher explained that girls can be firefighters, the post reads.

Mutual aid partners from throughout the region showed up with their families and their departments’ fire trucks to contribute to the open house. Gardiner Fire and Rescue gave a tour of one of its rescue vehicles, showing off the interior and the stretcher, to interested attendees.

Maine Game Warden Andrew Franklin showed off the Maine Warden Service’s airboat, one of five in the state, which is stored at the Dresden Fire Department. Representatives from the Lincoln County Sheriff’s Office, the Richmond Police Department, and the Lincoln County Communications Center and Emergency Management Agency were also in attendance.

“It’s unbelievable the work (volunteer fire departments) do,” said Lincoln County Sheriff’s Office Maj. Ken Mason, who is currently running for Kennebec County sheriff. “We have an outstanding relationship and we all work really well together. We’re on the same mission: serving the people,” he said.

“These guys work their rear ends off,” said Tod Hartung, director of the Lincoln County Communications Center and Emergency Management Agency. “They support the community, so if us being here shows them a little bit of support, it’s the least we can do.”

After a difficult week, the attendance at the event and the support displayed by the community was appreciated, Dresden Fire Chief Steve Lilly said.

“I can’t praise my department enough,” Steve Lilly said. “Everyone did an outstanding job,” he said, in reference to the recent emergency calls. “I may be the chief, but I’m nothing without (the members),” he said. “Without them, I couldn’t do what I do.”