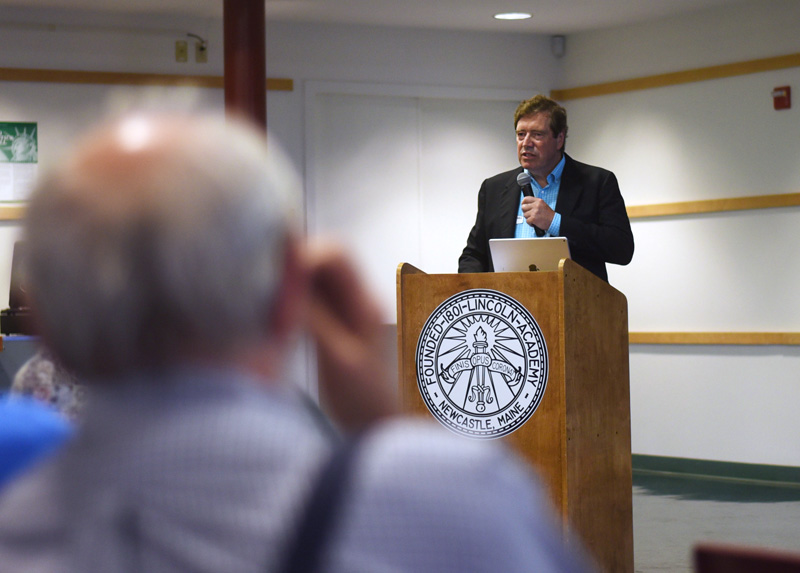 “We began pretty modestly 20 years ago,” Eldercare Network of Lincoln County founder and Chair Dr. Allan “Chip” Teel said of the organization during a 20th-anniversary reception at Lincoln Academy in Newcastle on Thursday, Sept. 13.

Teel said the nonprofit has grown from mostly giving advice, to placing people in spare bedrooms, to operating seven residential care facilities, known as “the Greens,” in Boothbay, Damariscotta, Edgecomb, Jefferson, Round Pond, Waldoboro, and Wiscasset.

According to Teel, the organization arose out of the notion that there needed to be an alternative to nursing homes. It has now provided residential care for more than 500 people.

“Little did I know that the organization would grow into something as large and unique and needed in our community as it is now,” said Andrea Handel, Eldercare Network’s executive director emeritus.

“They have their own space that they can call their own,” she said of residents of the Greens. “It’s quite an asset for Lincoln County.”

According to a history of the organization by Handel, Hodgdon Green, in Damariscotta, was the first of the family-style residential care homes. It opened in 1998 with 16 beds.

“Statistics revealed that there were several thousand older adults in Lincoln County who were age 75 or older,” Handel wrote. “All of them faced the prospect of ‘aging’ while having no affordable local place to live where they could get assistance with activities of daily living once they were in need of those services.”

From 2000-2008, the other six homes opened, bringing the network’s number of MaineCare-reimbursed assisted-living beds to 58. It also has two independent apartments.

Teel introduced board member emeritus Bob Hardina, saying, “he’s been an inspirational leader for us on the board.”

“Eldercare was our child,” Hardina said. “Our child has grown up. It is different than what we envisioned.”

“It is going to be different in the future, because we are not dealing with just any institution, we are dealing with people,” he said.

“You walk into Jefferson Green, or walk into Round Pond Green, and what do you see? Not an institution, but family. And I think that that is the most important thing we have,” Hardina said. “Human beings desire and need family.”

“I think the future is going to hold wonderful things for Eldercare Network,” he said.

“Right now Eldercare Network is moving forward and intensely focused on recommitting ourselves to some of the basics of the quality of life for residents,” Teel said. “Many of these things are little things that all of you could help us with. Whether it’s taking somebody to watch the fireworks, or going to get an ice cream, or watching a movie, or going to see a ballgame.”

The network has developed other programs for older adults in Lincoln County: Independence at Home, which provides in-home personal care; and Open Arms Respite Care, an adult day program within each of the residential care facilities.

The network’s newest program is Successful Aging, which provides music, exercise, and nutrition programs to older adults, according to Handel.

There are also community events, and programming involving volunteers.

During the anniversary celebration Sept. 13, keynote speaker Dr. Michael Fossel, founder of Telcoyle, spoke on aging and new developments in Alzheimer’s research. Michael Fossel is the brother of board member Les Fossel.

The Eldercare Network is also collaborating with Skidompha Library during September to show “age-positive” movies for free at 7 p.m. every Thursday in Skidompha’s Porter Hall.

From Sept. 25 through Nov. 19, the network will hold more anniversary events, such as open houses at each of the Greens.

“What will keep Eldercare Network going strong in the future is that ability to continually ask the residents or ask the people that we’re serving, ‘What is it that you’d like? What is it that you need?’ and to be prepared to try to put together programs that will really meet those needs and those desires,” Handel said.