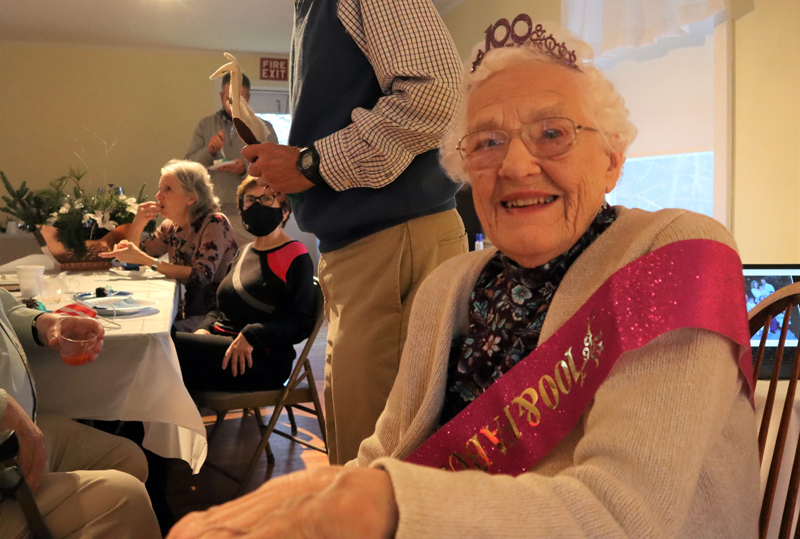 Eleanor Smith of Waldoboro turned 100 on Dec. 18, making her the oldest resident of the town. (Emily Hayes photo)

Waldoboro native Eleanor Smith celebrated her 100th birthday on Saturday, Dec. 18, surrounded by her children, grandchildren, and great-grandchildren, as well as many residents whose lives she has touched over her century-long life in Maine.

Donning a tiara and a hot pink sash reading “100 and fabulous,” Smith was presented with the gold-tipped Boston Post Cane by Waldoboro Selectman Bob Butler, a tradition signifying her as the oldest resident of the town.

Born in Gross Neck on Dec. 18, 1921, Smith and her family moved to the house next to her current home on Bremen Road in Waldoboro when she was 8 years old. Her father, Dewie Winchenbach, was a carpenter, and built the home along with many other houses in town.

Winchenbach and his brother also built The Waldo Theatre downtown.

Her mother, Emily Winchenbach, was a correspondent for The Lincoln County News.

Smith is unsure about the secret to living to 100 years old, she said, but she never smoked, never drank, and has “good genes.” 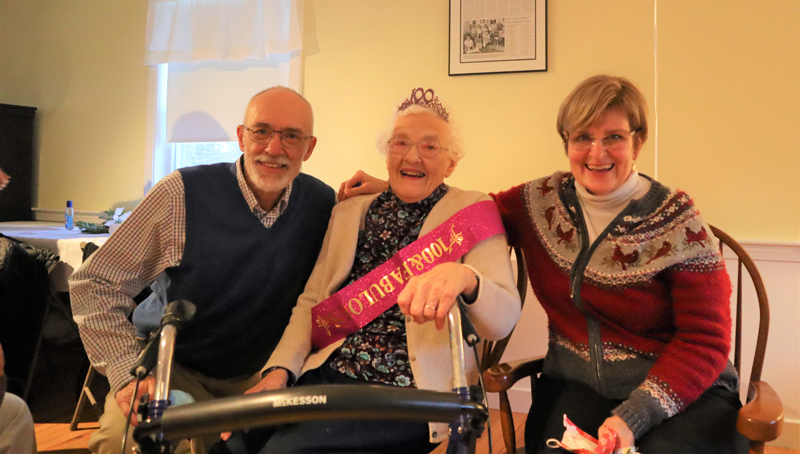 Eleanor Smith poses with her son, Sherman Smith, and her daughter, Barbara Higgins, during her 100th birthday party on Dec. 18. (Emily Hayes photo)

Her father lived well into his 80s, and her mother lived to 93, despite a lower life expectancy for people born around the year 1900.

Growing up in Waldoboro, Smith’s lifestyle included playing outdoors and eating fresh or canned vegetables from her mother’s garden. The family raised a pig and ate venison her father hunted for in the woods near the house. Over the years, the family had chickens and a cow for fresh eggs, meat, and milk.

The house in Gross Neck did not have electricity when Smith was young.  “It was a lot of physical labor and exercise,” she said. She used to bring in wood for the stove, and used a well for water.

For most of her life, Smith kept a large garden and canned her green beans as her mother did. She grew everything without chemicals or fertilizers, and her grandchildren Stephen Smith and Rebecca Brusven lovingly recalled how they were her insect repellent, picking beetles off of her tomatoes as a chore when they were young. 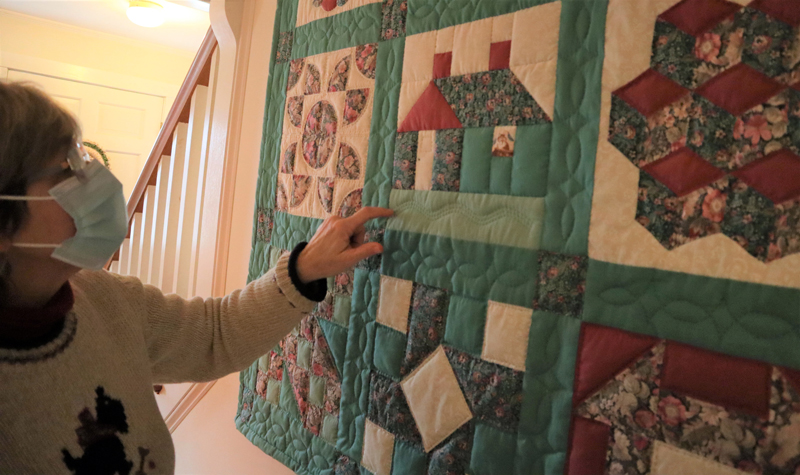 “Some of the things my mother cooked I continued on,” Smith said, such as baked beans on Saturday nights with brown bread.

Though stores nearby sold things like relish, Smith continued to make her own, this would last for months. She made her own strawberry jam, gingerbread, and pickled beets, as well.

“It was much healthier,” she said.

Smith was a cheerleader at Waldoboro High School, with 28 students in her graduating class.

In 1947, she married Sherman Smith after meeting him at a dance at Lakehurst Lodge in Damariscotta. “It used to be the social gathering spot for the Midcoast area,” Smith said.

After living in Portland and Augusta and raising their family in Waterville, the Smiths returned to Waldoboro in 1979. They built a house on the land Smith’s father owned, where she lives still on her own, cooking her own meals and doing her own laundry. 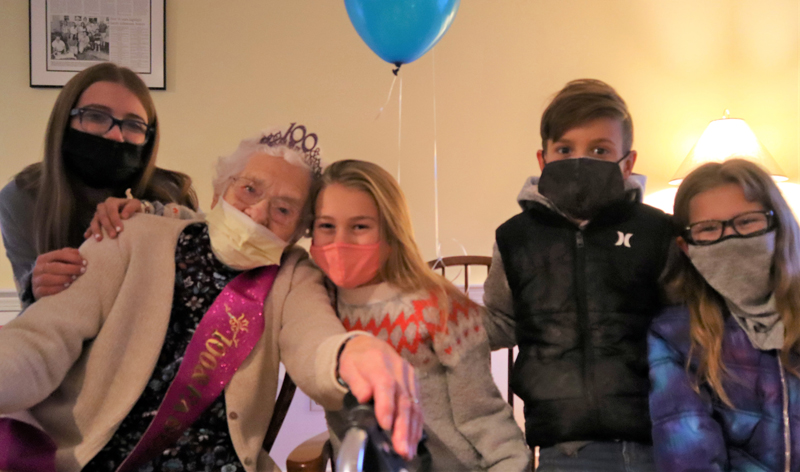 Eleanor Smith of Waldoboro poses with four of her great-grandchildren on her 100th birthday on Dec. 18. (Emily Hayes photo)

Smith drove until she was 96, and was active in community service up until the COVID-19 outbreak. She read books with students in the Nobleboro Central School first grade class, and helped with Meals on Wheels in West Waldoboro. She continues to cook for family birthdays and Christmas.

“You get tired, but I force myself to stay active,” Smith said.

She picked, cleaned, and prepared strawberries and shortcake for the Strawberry Festival the community club in Waldoboro used to organize, and after Smith retired, she became an avid quilter in her 70s.

She made both wall and bed quilts for her grandchildren to mark when they moved from a crib to a bed.

“Mom was a very accomplished seamstress,” Higgins said. Smith made most of her own clothes and dresses from bureaus full of fabrics. 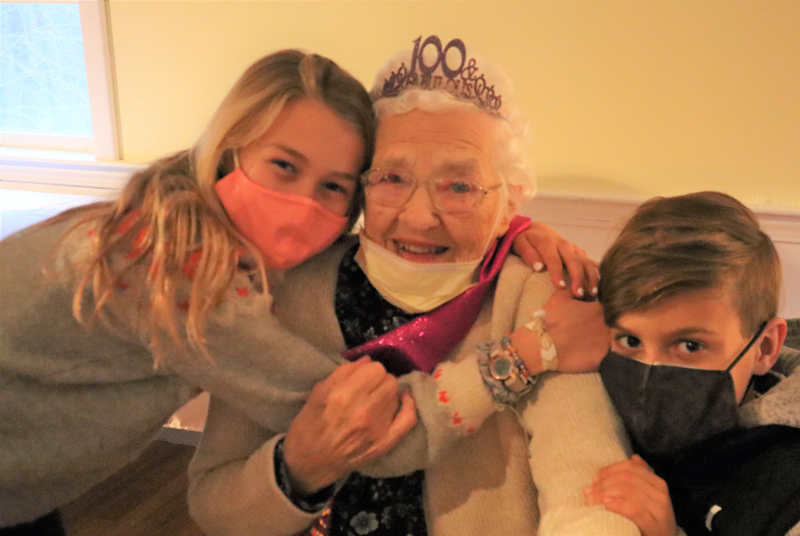 While living in Waterville and raising her family, Smith was also active in visiting and helping seniors after helping one woman who fell outside of a store.

“Helping other people has always been her interest,” Higgins said. “She’s very other-oriented.”

During her 100th birthday party at the Dutch Neck Community Center, Smith walked around to greet guests and talk with longtime family friends and neighbors, her voice rising above the crowd.

“Being part of the community and seeing loved ones gives her energy,” Stephen Smith said of his grandmother. “She has more energy than she did even four years ago.”

The grandchildren laughed over how she still watches the television show Jeopardy!, and recalled how they would walk with her every day.

“If you don’t take care of yourself then you don’t get to 100, and she took care of herself. She was disciplined,” Smith said.