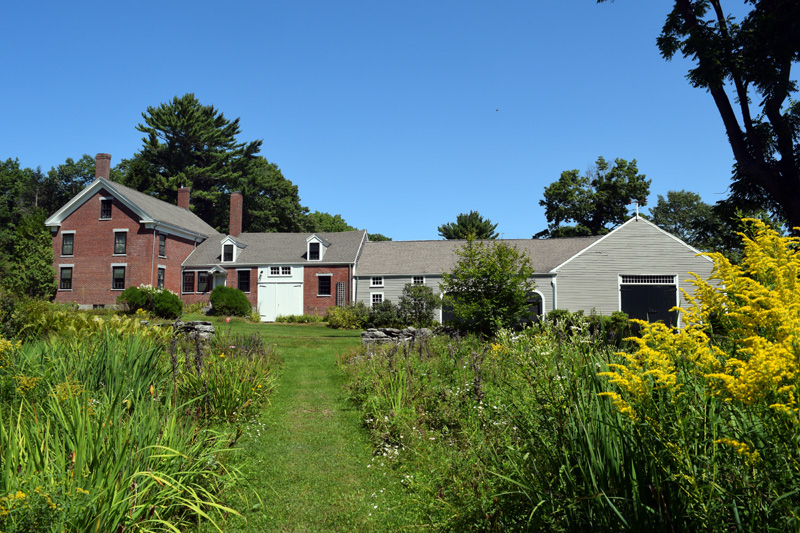 For the second year in a row, the Frances Perkins Center held its annual Garden Party online on Sunday, Aug. 15, honoring three leaders in and outside of Maine and celebrating significant grant awards toward the preservation of the Frances Perkins Homestead National Historic Landmark.

Frances Perkins was Franklin Delano Roosevelt’s Secretary of Labor and the first woman to serve as a cabinet secretary. She is widely understood to be a driving force behind the policies put forth in the New Deal that influenced or designed programs like Social Security, the Civilian Conservation Corps, the Fair Labor Standards Act, anti-child labor laws, and a minimum wage.

The Frances Perkins Center was founded in 2009 as a nonprofit, nonpartisan organization to honor and preserve Perkins’ legacy.

The nonprofit purchased the Frances Perkins Homestead on Jan. 3, 2020, to preserve and protect the landmark. The 57-acre plot was with the Perkins family since the 1750s, and a tent pole in Perkins’ life. The homestead, along with a new education center, is expected to be opened to the public in the spring of 2022.

This year’s Garden Party, streamed to the organization’s website, was put on, in part, to celebrate significant grant awards secured by the nonprofit from the National Park Service’s “Save America’s Treasures” program and the State of Maine for the homestead project. The evening’s awards were presented by Frances Perkins Center Director Michael Chaney.

Sen. Elizabeth Warren was recognized for the Intelligence and Courage Award. Warren has expressed a personal connection with Frances Perkins in the past, giving a speech during her campaign in 2019 in Washington Square behind a podium constructed from wood collected at the Frances Perkins Homestead.

During the event, Warren spoke on the importance of remembering and pursuing the examples of leaders like Frances Perkins.

“The way I see it, the essence of her legacy rests in what she was fighting for: Opportunity. Frances believed down to her bones that government should be a powerful force for good in the lives of people, and that it was the responsibility of government to give everyone a fighting chance to build a life that they can be proud of,” Warren said.

Dr. Heather Cox Richardson, who lives in the Midcoast, shared the Intelligence and Courage Award with Sen. Warren. Richardson is a 19th-century historian at Boston College and the bestselling author of six books.

Richardson pens a daily column published on Substack and sent out to email subscribers, called “Letters from an American,” about the current American political scene in the context of the nation’s history. It has garnered hundreds of thousands of followers. She also co-hosts a weekly podcast with fellow historian Joanne Freeman, called “Now and Then,” where the two discuss the news of the week and its historical context.

Richardson said that she only started her acclaimed newsletter as a way to entertain herself while she waited to see if she would have an allergic reaction to a hornet sting.

“I thought, ‘Well, I got nothing else to do while I’m sitting here swelling, I might as well answer people and, you know, tell them what’s going on in the world,” Richardson said.

Richardson said that Frances Perkins has been a part of her life since she could remember, as her mother would frequently reference the New Deal icon, and said she was honored to be in her space at the homestead.

“It strikes me that you really can’t understand modern America, but certainly America since World War II, without understanding the role of Frances Perkins herself, and also so many other women like her, that she inspired,” Richardson said.

The name of the award references something that Frances Perkins’ grandmother used to tell her: “When a door opens to you, you must go through it.” It is given to a young person who reflects Perkins’ commitment and aspirations as a young woman.

Vazquez eventually graduated from Narraguagus High School and worked as a tutor at Mano en Mano while she improved her English. She earned a bachelor’s degree in education from the University of Maine at Machias and worked her way up the ranks at Mano en Mano to become program director in 2019, and is now leading the organization’s new bilingual child care initiative.

“With all the programs that we have with our migrant education program, we’re supporting migrant students and families to be able to advocate for them … but also to empower them to take the advocacy and those examples wherever they travel as well,” Vazquez said.

For more information on the Frances Perkins Homestead, future events, how to donate, and more, go to francesperkinscenter.org.