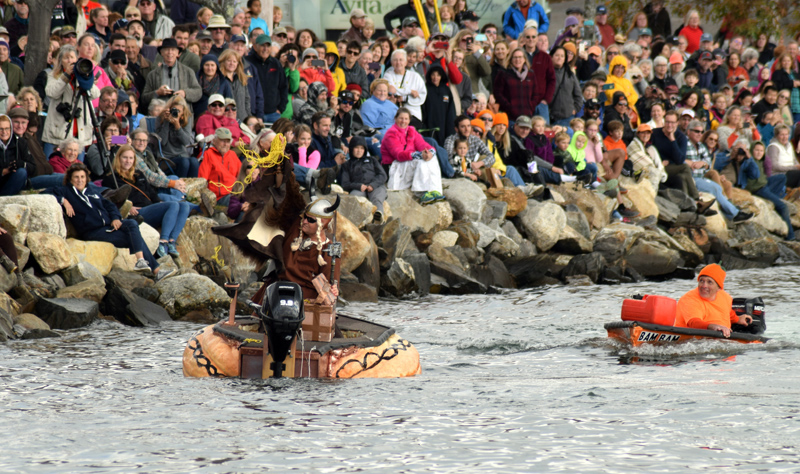 Russell Orms, of Austin, Texas, holds up the “gnome gold” he retrieved from a floating treasure chest as Buzz Pinkham looks on during the 13th annual Damariscotta Pumpkinfest Regatta on Oct. 14, 2019. The Twin Villages is holding the first parade and regatta since 2019 and traffic patterns will be altered in town. (Evan Houk photo, LCN flie)

Elm, Theater, and Water streets in Damariscotta will be closed for Damariscotta Pumpkinfest & Regatta festivities on Saturday and Sunday, Oct. 8 and 9.

This will be the first full slate of events for the festival since 2019, with the parade and regatta returning, and traffic patterns in Damariscotta and Newcastle will be altered as a result.

Motorists will still be able to access the Elm Street Plaza and its businesses via Elm Street, which will be open to local traffic, according to Jed Weiss, of the Damariscotta Pumpkinfest & Regatta Committee.

Colby & Gale Inc. is donating the use of the parking lot in Elm Street Plaza, which will be closed to display the prize-winning pumpkin from this year’s weigh-off on a hay wagon and to host live music by buskers.

The committee wants to highlight and draw activity to the businesses off Main Street, Weiss said during an interview on Friday, Sept. 30.

WGME Chief Meteorologist Charlie Lopresti took the top prize this year with a 2,080-pound light orange fruit during the weigh-off on Sunday, Oct. 2.

Water Street will be closed for shuttle drop-off locations that will be transporting people from both Lincoln Academy and Great Salt Bay Community School to the downtown municipal parking lot.

Theater Street will feature some informational booths and possibly a food vendor, Larry Sidelinger, of the Pumpkinfest committee, said during the Sept. 21 meeting of the Damariscotta Select Board.

Metal barricades will also be set up along Main Street early morning on Saturday, Oct. 8 to delineate crosswalks for pedestrians during the typically busy weekend in town. Crossing guards will be on hand for the weekend’s events, Sidelinger said.

“This is a crapshoot because we don’t know how many people are going to be here,” Sidelinger said at the meeting.

The barricades will be removed and the streets will be reopened by midday Monday, Oct. 10, at the latest, Weiss said.

The giant pumpkins will be deployed on Main Street on Thursday, Oct. 6, when traffic will be “slow going,” according to the Oct. 3 Damariscotta town office newsletter. Artists will begin decorating the pumpkins on Friday, Oct. 7.

“Traffic should not be impacted by this activity,” according to the newsletter. It encourages drivers to be careful driving through town as there may be onlookers paying more attention to the pumpkins than the road.

Main Street in Damariscotta to its intersection with Bristol Road, Mills Road in Newcastle, and the off-ramp from Route 1 into Newcastle will be closed to traffic starting at 1:45 p.m. for the Pumpkinfest parade, the first since 2019. The parade starts at 2 p.m. and the roads will be closed until at least 30 minutes after the conclusion of the parade.

The regatta will be held at noon on Sunday, Oct. 9. The downtown municipal parking lot will be closed for the duration of the event once the lot is filled.

Throughout the weekend, parking will be restricted on Glidden and Pump streets in Newcastle and on Cross, Church, and Miles streets, as well as Bristol Road, in Damariscotta, according to the Damariscotta town office newsletter.