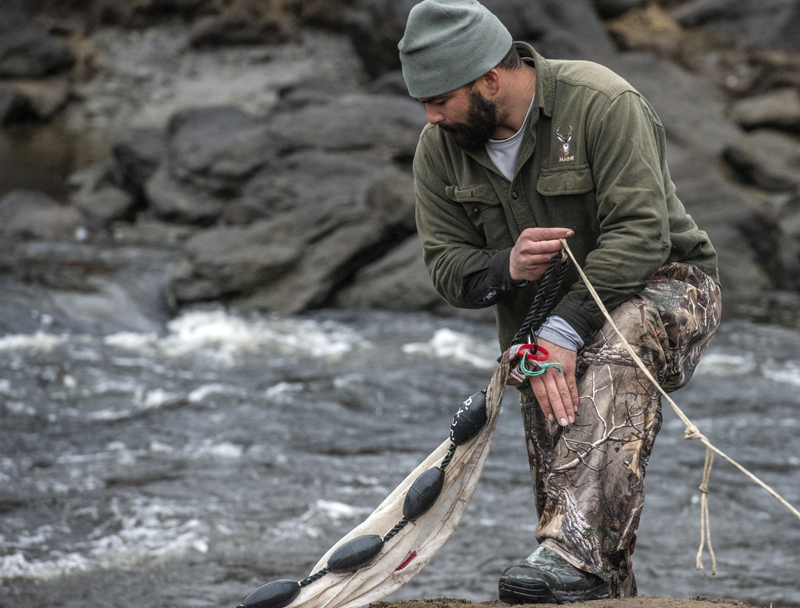 A tribal fisherman tests his net prior to the start of elver season at the Pemaquid Falls town landing, Monday, March 30. Fishermen must have a pound or more to sell their catch, per new social distancing guidelines from the Maine Department of Marine Resources. (Bisi Cameron Yee photo)

At 8 a.m., Monday, March 30, about 30 elver fishermen were at the Pemaquid Falls town landing to claim their fishing spots for a shortened season.

The elver, or glass eel, season in Maine got off to a late start because of a coronavirus-related delay from March 22 to March 30.

Bristol Town Administrator Chris Hall said in a phone interview March 30 that he estimates there were at least 60 fishermen at Pemaquid Falls on opening day last year.

The price drop is largely due to decreased demand in Asian markets due to economic complications and shipping restrictions caused by the COVID-19 pandemic.

Most elvers are shipped to Southeast Asia, where they’re raised in artificial ponds until they’re big enough to eat.

Amanda’s Elvers, which has a location in Waldoboro, posted on the Maine Elver Fishermen Association Facebook page that the shop would be buying elvers starting at $500 per pound this year.

The shop also laid out strict measures and protocols for selling eels to limit the spread of the coronavirus.

Elver fishermen are also restricted by physical distancing requirements instituted by the Maine Department of Marine Resources, instructing fishermen to stay 6 feet away from each other.

“Our objective is to reduce the population of harvesters congregating on the shores and at dealers’ shops,” DMR Commissioner Patrick Keliher said in a statement Thursday, March 26. “Key to achieving this objective will be to allow those who are the most vulnerable to remain at home and have another harvester catch the elvers for them.”

Larry Friend Jr. was fishing for his neighbor, Pat Bryant, a longtime elver dealer and fisherman who operates out of Nobleboro, at Pemaquid Falls on Monday morning.

Friend, who has been elver fishing for three years, said he and his wife entered the lottery to obtain licenses this year, but were not chosen.

Elver fishermen use one of two kinds of nets: dip nets, which are used to scoop eels from the river by hand; and fyke nets, which are funnel-shaped and set in the river to fill with elvers as they swim upstream.

Friend set up a fyke net in the river. Fyke nets have to be checked, emptied of elvers, and adjusted daily.

Friend said it will be a hard year for many fishermen who make their living exclusively during the short elver season, which is set to run until June 7 or whenever the statewide quota of 9,688 pounds is reached.

Bryant, in a phone interview Tuesday, March 31, said the market for elvers is limited this year and no one can predict what will happen in the coming months.

“People usually don’t sell them at first; they’ll hold on to them. No matter what the price starts out at, they’ll hold them and hope the price goes up.

“This year, nobody knows whether it’s going to go up or not. … I don’t know what’s going to happen. It remains to be seen.”

Bryant said many fishermen may sell early in case of a further dip in prices.

Bryant, who has been dealing in elvers since the fishery emerged in the late 1970s, said Pemaquid Falls has long been a popular spot to find the baby eels.

Several members of the Pasamaquoddy Tribe were present at Pemaquid Falls for the opening of elver season. The tribe may harvest 14% of Maine’s elver quota under state law.

Many fishermen have been camping at the adjacent Pemaquid Mill since the beginning of March, with the permission of property owner Coastal Rivers Conservation Trust.

“As temporary owner of the mill property, we have welcomed the Passamaquoddy to continue a long-standing fishing tradition at the Pemaquid Falls site and to camp on the property during the fishing season, providing the camping is away from the river,” Coastal Rivers Conservation Trust Executive Director Steven Hufnagel said.

Concerns about campers parking at the Pemaquid Falls town landing were raised at the March 4 meeting of the Bristol Board of Selectmen, which led to the town placing a portable toilet on the Pemaquid Mill property for campers. The town has a 2007 ordinance that prohibits parking in town parks from a half-hour after sunset until a half-hour before sunrise.

Hall, the town administrator, said the campers couldn’t be more courteous and respectful of the property and the town.

“If all our summer campers acted like them, we’d be in good shape,” he said.

The only states where elver fishing is permitted are Maine and South Carolina, which has a fishery much smaller than Maine’s.