From left: Michelle Phelps, of Phelps Architects Inc.; John Roberts, of Lincoln County Publishing Co.; Jennifer Villeneuve, of Gallagher, Villeneuve and DeGeer PLLC; and August Avantaggio, of Riverside Butcher Co., participate in a Chats with Champions panel about local entrepreneurs in the Porter Meeting Hall of Skidompha Library the evening of Tuesday, May 23. (Maia Zewert photo)

Four Lincoln County natives spoke about their experiences in returning to their birthplace and becoming the next generation of business owners in the Twin Villages in the Porter Meeting Hall of Skidompha Library the evening of Tuesday, May 23.

More than 30 people attended the forum, which was part of the library’ Chats with Champions series.

Each of the panelists spoke about what brought them back to Maine after spending time living and working outside the state, the challenges they face in their respective fields, and the unique quality of life in Lincoln County.

“The decision to live here was made first, and then it was to find the niche to do my own thing,” Avantaggio said. He began Riverside Butcher Co. at 49 Main St. in Damariscotta, the former home of Narragansett Leathers, one year ago.

When Reny asked if there was anything about doing business in the Twin Villages that surprised the panelists, Avantaggio said he wasn’t surprised to see the community support his small business.

“What I expected of the community was really dead on,” Avantaggio said. “We do have clientele we see two, three times a week.”

Avantaggio told a story of a regular customer who came into the shop one day not to purchase anything, but just to tell Avantaggio that he had attended a barbecue where everyone had bought their food from Riverside Butcher Co. Less than three hours later, a different person came in with the exact same story.

“That sense of community is so unique to the area, and it’s awesome to hear,” Avantaggio said. 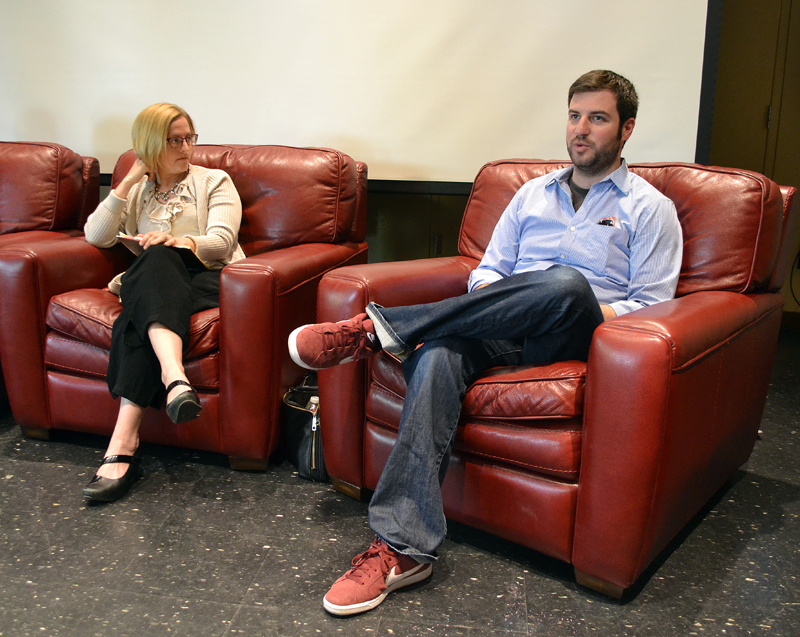 Villeneuve agreed, saying it was the community and the lifestyle that brought her back to Maine.

“When I say lifestyle, it’s not about the ocean and the mountains. It’s the deeper things,” Villeneuve said. “What I’ve realized is that people seem to really value that deeper interaction beyond just asking where you work and what you can do for (them). People genuinely want to learn about you as a person.”

The sense of community stretches beyond personal interactions, Villeneuve said. In the event she needs advice or a second opinion, Villeneuve said she knows there are other lawyers in the Twin Villages she can call for advice.

Phelps and her husband and business partner, Dan Phelps, spoke about their recent renovation of a building at 278 Main St. in Damariscotta, the new home of their business. Phelps said one of the difficulties of their former location at 170 Main St. was the lack of available parking.

The couple said that one of the advantages of working in the Twin Villages is the ability to connect with professionals in other areas, including financial management and construction.

“Forming those connections with other businesses is what allows us to focus on what we do best,” Phelps said.

Roberts talked about the opportunities facing the newspaper industry, including becoming relevant with the next generation while also continuing to serve longtime readers. In the past year, The Lincoln County News debuted a new website and made advances in social media while making a significant investment in its print edition with an upgrade to its printing press.

Echoing previous statements by the other panelists, Roberts said it was the sense of community that brought him back to the area, where he has joined the family business.

“The people in this community are second to none, and there’s a real sense of pride in the community here that you don’t see everywhere else.”