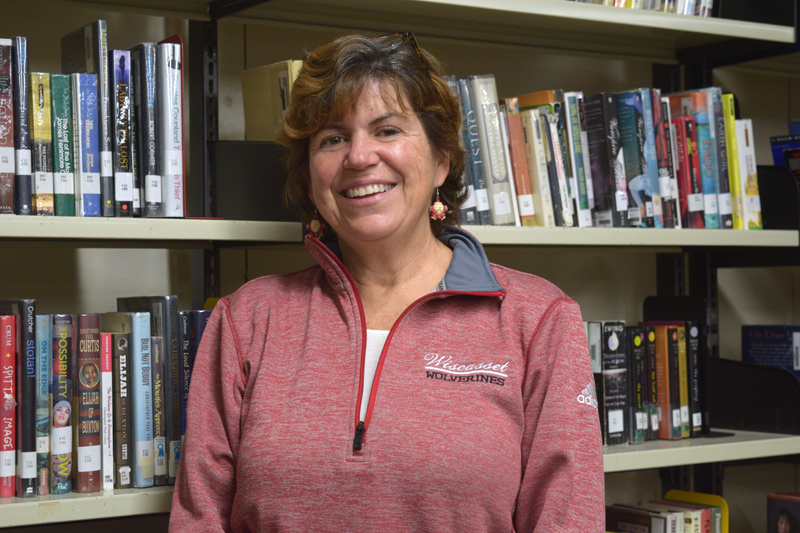 The libraries in Wiscasset schools have changed over the last 32 years, but there has been at least one constant – librarian Cynthia Carter, who retired Friday, Dec. 20.

Carter, librarian for both Wiscasset Elementary School and Wiscasset Middle High School at the time of her retirement, joined the school system in 1987.

She changed career paths because she thought school libraries could be more inviting and comfortable for students. She wanted to continue to work with children, stay in education, and share her excitement for literature.

“I still consider myself a teacher, just in a bigger classroom, but I don’t have to read all of those essays,” she said with a laugh.

Prior to the 2019-2020 school year, she worked full-time as the librarian at WMHS. This year, she also took on the position for Wiscasset Elementary.

Last year, a library education technician was cut, so she began to staff both libraries.

When Carter first started, the population of students was larger. She and a full-time ed tech worked with high school students only. At the time, the library was the hub for students.

WMHS science teacher Ralph Keyes, who started on the same day as Carter in August 1987, can vouch for this.

“Every school has a heart, and for many, many years, the heart of Wiscasset (High School) was the library. Cindy was always there, at her desk, centered in the open double-door frame, as you approached,” Keyes said. “She greeted everyone with a smile and a laugh – both staff and students.”

Today, students do not have as much time to go to the library because there are no study halls and there is less time before and after school to pick up a book due to tighter bus schedules.

Technology has cut down on many menial tasks Carter dealt with in the past, such as updating and teaching the card catalog in the ’80s and ’90s.

The old card catalog is now in storage at WMHS. Computers have replaced the card catalog and students need only type a book title or author’s name into a search field.

Carter believes technology takes away some of the social aspect of the library as gathering place because students have their own computers. Before each student had his or her own laptop, there was a bank of them in the library.

Although libraries are welcoming technology, Carter said, “That is one of my weaknesses.”

“A newer, younger person might have that strength,” she said.

Throughout Carter’s time in Wiscasset, she has taught English electives, such as mythology, creative writing, and a miniature unit on humor in literature.

“I always kept my foot in the teaching door along with being in the library,” she said.

Back in the 2000s, Carter held sporadic book clubs for students and teachers.

For about 10 years, she was a leader, alongside Keyes, of the outing club, taking students on camping and mountain-hiking trips.

“We often joked that we, two of the senior staff members, were the ones charging up Maine’s mountains behind a group of teenagers,” Keyes said in an email.

The best part of being a librarian, for Carter, is finding a reluctant reader and placing the right book in his or her hands.

“Then they come back the next day or two days later and say, ‘Do you have any more like this?’” she said.

Carter stayed at her job so long because she was happy and thinks the district has hired “super colleagues.” Some of her former students are now some of her best friends.

This was the right time to retire, she said. She will miss her new elementary school students; however, she has grown somewhat tired of running back and forth between schools.

“January is nature’s way of saying it’s time to slow down. It’s time to hibernate,” she said, laughing. “So I decided to take a little sign from nature.”

With her spare time in retirement, Carter will work on her new house, spend time with her family, travel, go back to swimming, and continue to sing in the Royal River Chorus of Sweet Adelines International, a women’s barbershop group.

She also hopes to substitute teach in Wiscasset.