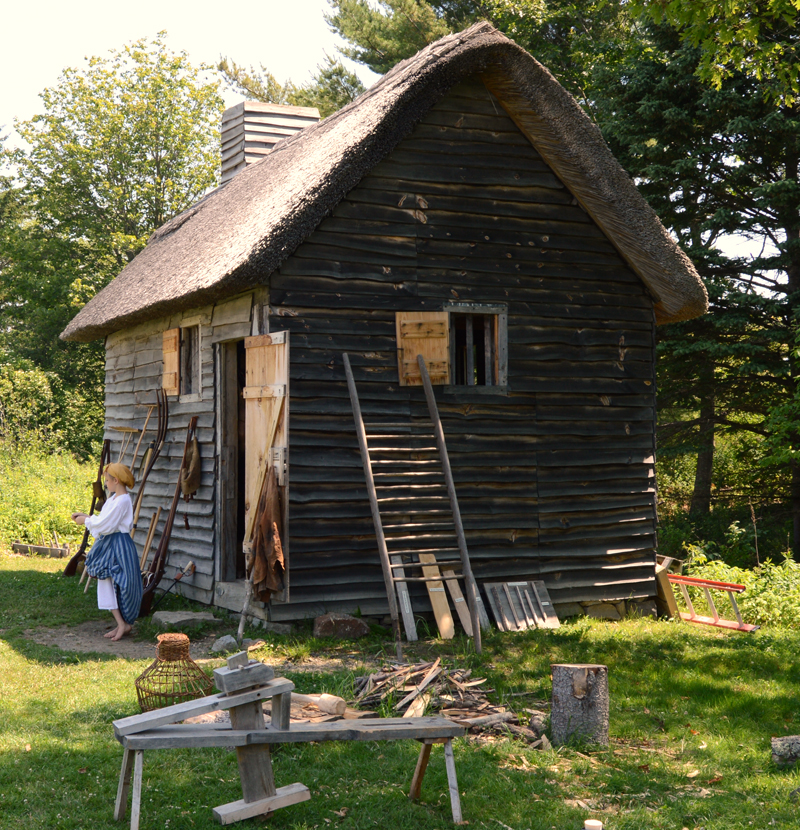 Addie Miller, granddaughter of Jeff Miller, the master blacksmith who is facilitating the living history exhibit, stands in front of the replica of a 17th-century fisherman’s house at Colonial Pemaquid State Historic Site on Saturday, June 6. (Evan Houk photo)

A small group of living history interpreters are bringing to life a reproduction of a 17th-century cod fisherman’s settlement at Colonial Pemaquid State Historic Site.

Halfway down the dirt road to the site’s museum and The Contented Sole restaurant, the waddle-and-daub thatched-roof cottage, built to 17th-century specifications, can be found on the right side of the road.

The mostly volunteer crew, all in period-appropriate attire, began a day-long presentation at 10 a.m., Saturday, July 6. The informal group, which does not have an official name or designation, will conduct full demonstrations every Wednesday and Saturday throughout the season.

Jeff Miller, blacksmith and owner of Flintlock Forge in Waldoboro and facilitator of the project, with his friend Paul Daiute, will continue to work on constructing the house every Friday, Saturday, and Sunday and will be available to explain the history to anyone who stops by.

The house is based on a structure estimated to have been built nearby around 1630. The structure’s foundation and construction were discovered during archaeological excavations.

Miller said the structure would have been typical of a 17th-century fisherman’s house. He said one family of five to seven people would have lived in the space.

Daiute referred to the settlement replication as a “hidden gem” on the Pemaquid peninsula that he hopes more people will discover.

“This shows the early seeds of settlement in New England,” Daiute said of the historic site.

He said all the artifacts and clothing are handmade and based on all the latest research and archaeological evidence.

Visiting the interpretive history exhibit is like stepping into a time capsule that allows one to feel what it was like to live on the peninsula in the 1630s.

Everything is realistic: from the look and feel of the meticulously hand-crafted garb, furniture, and tools, all made to the time period’s specifications, to the smell of cod-liver oil or the daub being mixed by old-fashioned foot-stomping in the wooden trough outside the house.

The house is referred to as “waddle-and-daub” because the walls are constructed out of these two building materials, which were popular in the area in the 1600s.

Waddle refers to the strong tree branches placed horizontally between the wooden studs for structural support, serving as an early version of today’s steel rebar.

The daub is a plaster-like material spread between the wooden structure of the house to serve as a wall material and as insulation. Miller and Daiute mix the daub in historically accurate fashion in the wooden trough outside the house.

This process is a key part of the historical demonstration, as Miller and Daiute slowly mix the ingredients – clay, sand, chopped straw, cow manure, and water – by stomping on them with bare feet until the mixture reaches the proper consistency and is ready for application.

“When it’s finished, we will cover it over with a thin layer of plaster, lime wash. That will seal it and make all the panels here white, all the way around,” Miller said of the interior of the house.

The house and yard also has the following historically accurate accessories: a codfish drying rack with real gutted and dried codfish from Canada; a garden growing corn, squash, pumpkin, and beans; a 17th-century spread of wild strawberries, hasty pudding, peas, and oat cakes; and stoolball equipment to play the popular Colonial game, similar to cricket.

On June 6, two children, Whit Dekker and Addie Miller, were enthusiastically playing stoolball for most of the day.

Whit Dekker is the son of Mike Dekker, a local author of “The French and Indian Wars in Maine,” who will volunteer every Wednesday and Saturday to help interpret the living history exhibit for visitors. Addie Miller is the granddaughter of Jeff Miller. The two children will make “guest appearances” at the exhibit from time to time, according to Daiute.

Miller said the historical accuracy of the exhibit is made possible by the numerous archaeological discoveries at the historic site, such as foundations and artifacts.

“The (Native Americans), finding the place empty here, just simply burned it right to the ground. And when this little building burned, this wall fell into the cellar, which is right underneath the floorboards … and when it did that, the daub was preserved for 300 years,” Miller said of how they knew about the house’s construction.

The house on the peninsula only stood for a little over 40 years, as it was burned in 1675. According to Miller, the mostly English settlers then fled to Damariscove Island in hopes of continuing their lucrative cod-fishing enterprise.

“Many people don’t realize that Maine was a battleground for 80 years. Six different wars ravaged the area. There were three forts here, two of which were captured,” Mike Dekker said.

The settlers living on the peninsula at the time were mostly from the west country of England, around the towns of Bristol and Devin, according to Miller.

The cod fishermen came specifically for the cod and sold it to markets all over Europe. The best cod would go to the area around the Mediterranean, including Portugal, Spain, Southern France, and Italy.

The cod had to be dried and salted to preserve it for shipping. Miller explained that the fishermen would lop off the head of the fish, take out the insides, take out the backbone, and open it up like a book.

They would salt the cod down to draw any excess moisture out, then let it dry. Then it would go onto the wooden “crib,” which is more like a waist-high fence, and the salt would be washed out. Finally, the fish would be laid out in the sun to dry.

This process would keep the fish preserved for up to two years. Before eating, it simply had to be rehydrated with some water, which would reconstitute the fish back to a fresh state.

Miller said cod is one of the only fish that can be preserved like this, which is why it was such a sought-after fish at the time.

Dekker spoke to the enormous volume of fish the fishermen pulled in off the dock, using nothing but twine rolled around a wooden handle.

Dekker said he calculated, using information from 1639 fishermen’s ledgers discovered on Richmond Island in Cape Elizabeth, that in a typical season settlers would catch approximately 96,000 fish using this time-intensive method.

The fish were probably in the range of 25-30 pounds each, Dekker said. He estimates that even more fish were caught on the Pemaquid peninsula and Damariscove Island because there were more fishermen living in those areas at the time.

Dekker indicated that there is also evidence of codfish in excess of 100 pounds being caught in the area. He said codfish that big do not exist anymore and it may even have been a separate species of fish that was fished into extinction.

The 17th-century fishermen’s exhibit will be staffed by at least one member of this group of interpretive historians every Wednesday, Friday, Saturday, and Sunday for the season at Colonial Pemaquid State Historic Site. The site is open daily from 9 a.m. to 5 p.m., from Memorial Day through Labor Day.

The group welcomes the public to stop and ask questions about the settlement and its history.