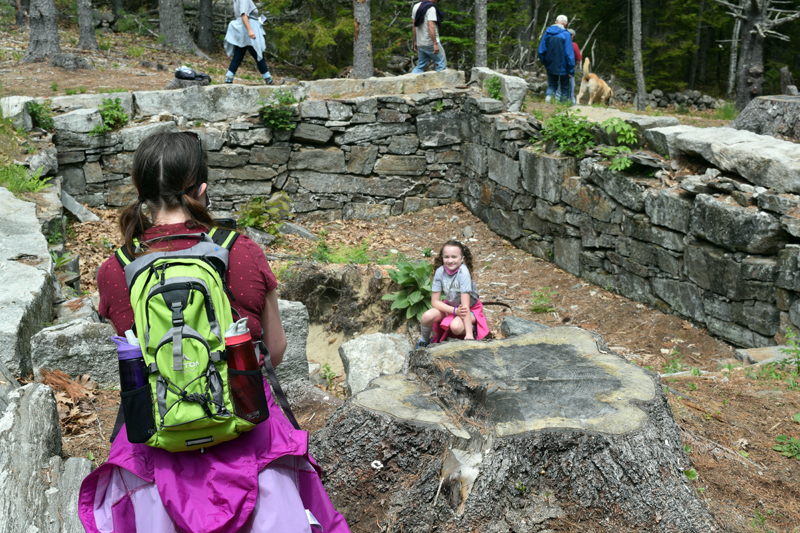 Children and parents alike explored the Colonial foundations and marshy shores of Squam Creek during a family scavenger hunt held by the Friends of Westport Island History on Sunday, May 23.

The three-hour event at the Kennebec Estuary Land Trust’s Carl and Barbara Segerstrom Preserve, with refreshments provided by the Westport Community Association, consisted of guided tours along the preserve’s trails, the scavenger hunt, and a quilt raffle.

Participants in the scavenger hunt were challenged to locate various landmarks and peculiarities among the preserve’s foundations, graveyards, and shoreline, such as a “hidden box of metal” and “an old house in a tree.”

Participants who completed the scavenger hunt earned Friends of Westport Island Frisbees, while one group of especially determined and energetic young men earned a $25 gift card to Round Top Ice Cream in Damariscotta.

Shannon and Ori Taylor, a mother-daughter duo participating in the scavenger hunt, moved to Westport Island in November and were happy for the opportunity to get outside and engage with the town’s history.

“A neighbor shoved an article in our door,” Shannon Taylor said, laughing. “We’re learning quite a lot thanks to the fantastic volunteer staff and the pamphlet they put together.”

In preparation for the event, the Kennebec Estuary Land Trust recruited volunteers the prior weekend to clean up debris from around the foundation of the recently deconstructed Segerstrom House, which will be reconstructed elsewhere on the island by Westport resident John Wallace.

According to tour guide and land trust board member Dennis Dunbar, the preserve land was originally settled by Timothy Dunton in 1740. His family eventually owned 700 acres on the island, or about 15% of it. Dunbar recently installed new trail signs at the preserve. He led two tours through the preserve’s woods on the day of the event. 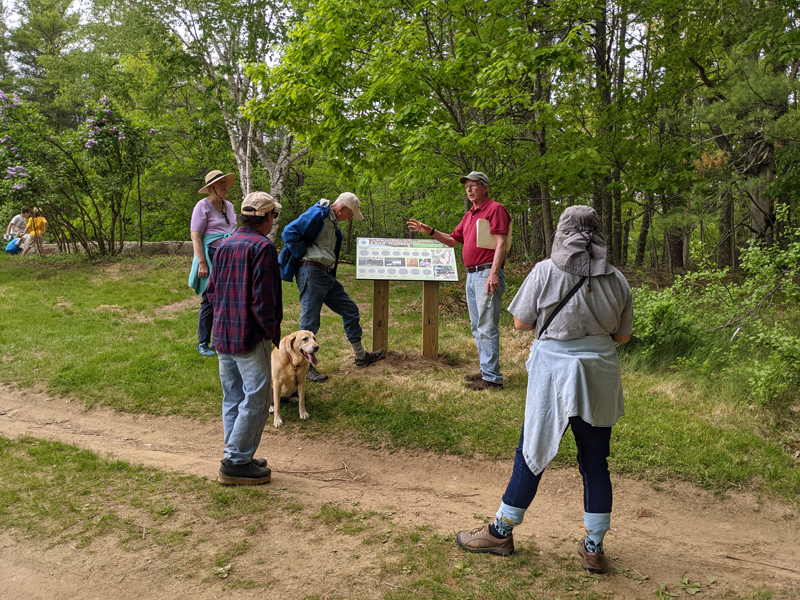 Dunbar has lived on the island for almost two decades and became involved with the town’s history committee 10 years ago, when he began researching the history of the island’s tidal mills. While Dunbar clearly knew the land’s history back-to-front, as far as it has been uncovered, he insisted that the research has been a team effort by the Friends of Westport Island History and the Westport Island History Committee.

“What I love about this place is that it takes advantage of both the land preservation and the history preservation,” Dunbar said.

The land trust bought the 160-acre preserve, named after a couple who had owned the land since the mid-20th century, in 2017.

While the scavenger hunt was put together by all of the Friends, it was Joan Bradford who initially proposed that they hold an event targeted toward families that also promoted social distancing in an effort to get more young people interested in the town’s history.

Bradford has lived on Westport Island going on five years, and she has dedicated much of her time to her work with the Friends since she retired from her career as a high school science teacher about a year ago.

“My husband is descended from first-generation settlers that lived at Brooks Farm and I just wanted to learn more about it,” Bradford said. “The history’s way cool.”

Among other accomplishments, the Friends, in cooperation with the history committee, opened the Westport Island History Center at the Wright House last October. On the same day, the Friends and the committee also unveiled the Westport Island History Trail, a 20-mile driving tour of the island that guides visitors not only to historic sites with interpretive displays, but also to some of the island’s most striking vistas.

Later in 2021, the Friends will participate in the Lincoln County Historical Association’s “Lincoln County Pilgrimage,” an initiative to hold various open houses, tours, reenactments, and displays at historic sites around the county as part of Maine’s delayed bicentennial celebration.

For updates on events and other news, see the Friends of Westport Island History Facebook page.