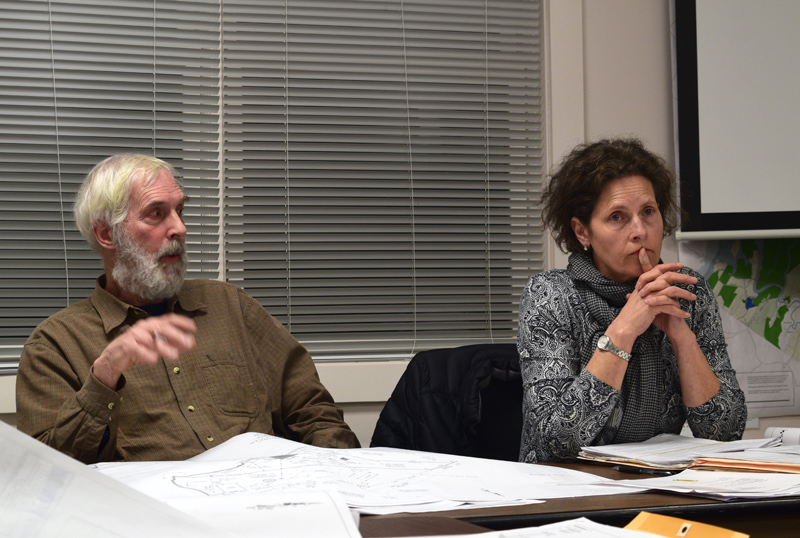 Newcastle Planning Board Vice Chair Rem Briggs speaks on the Post family’s request to amend a 2017 building permit while board Chair Bonnie Stone looks on during a board meeting at the fire station Thurday, March 21. (Jessica Clifford photo)

After the construction of a house too close to Damariscotta Lake in Newcastle and the town’s denials of its attempts to gain approval, a family may have to move the house back 4 feet or take the matter to court.

The house is about 15 feet from the lake, while the permit requires it to be at least 19 feet away, according to Newcastle Code Enforcement Officer Ken Vinal.

Fred Post Sr. and Lina Post received the permit in 2017 to build the house at 32 Nob Hill Road. Fred Post Jr. represented his father at the meeting, though his father was also present.

The house is in the shoreland zone on Damariscotta Lake. A grandfathered house was on the property before it was taken down and the new house was built.

After denying a building permit in 2015, the board granted a permit in 2017 with three conditions: a 4-foot setback from the original foundation, determined by the Maine Department of Environmental Protection; any area below the first floor could not be used as living space; and the house could be for seasonal use only.

The family appealed to the Newcastle Board of Appeals, which denied their appeal.

The Post family’s lawyer, Paul Brunetti, said that if they could do it over, they would have gone before the planning board again instead of the appeals board because the violation was undeniable.

“I have obviously had some things that were well out of my control. I tried to do the right thing and hire the right people to represent me up here and apparently that all backfired in my face,” Post Jr. said. “I’m sorry for that. I had no mean-hearted intention to do that.”

“Something happened to the stakes is my best estimate, and that’s why the house is where it is,” Post Jr. said. He said the house was being built in the winter months when there was snow on the ground, which could have impacted the work.

“Spring comes around, the ground thaws, the inspector goes out and makes an inspection. That’s the first time I’ve ever discovered I have an issue with the house,” Post Jr. said.

Neither the contractor nor the architectural designer was present at the meeting.

In a phone interview after the meeting, Leask said it was not his job to hire a surveyor or plot the land. Those facets of the work were up to the architectural designer, he said, but Simpson disagreed.

Simpson said that after she presented the project to the planning board and obtained a permit, her involvement with the project ended. She said she did that work for free as a favor to the Post family.

Leask said he does not know what surveyor worked on the project. He said the violation “was never intentional.”

“I think it was an oversight,” Leask said.

On Thursday, Post Jr. and Brunetti asked the board to approve the amendment to the building permit so the family could finish work on the house. A year has passed since any work has been completed.

“We’re in a tough situation having the contractor come in and admit that he’s wrong. At least for the purpose of this board, because there may be civil remedy, we were just hoping we could fashion some alternative remedy,” Brunetti said.

In addition, the basement has a concrete slab floor and a window, neither of which were in the design approved by the planning board in 2017, according to Vice Chair Rem Briggs.

The deck is about 4 1/2 feet higher than originally proposed, said Peter Drum, attorney for the town of Newcastle.

“Not only was it misplaced, but it was redesigned without coming back for board approval by the planning board,” Briggs said.

According to the land use ordinance in Newcastle, a basement is “any area of the building having its floor sub grade (below ground level) on all sides.”

Post Jr. said this was inconsistent with what he understood. He said he did not know adding a concrete slab floor and window was part of not having a living space in the basement.

Briggs said the slab floor and window were in the 2015 plan that was turned down.

“The contractor isn’t here. I think that if the owner and the owner’s representative are saying that the contractor’s at fault … it just seems to me that he has liability. He has responsibility,” planning board member Nick Buck said. “We are talking about a building that is grandfathered in to a distance from the water that we wouldn’t let anybody build today.”

Other members, including the chair and vice chair of the board, agreed with Buck.

“(If) the contractor had that piece of paper with the design and setbacks there and assured you that everything was going right and didn’t do it right, to my mind the contractor’s culpable,” Briggs said.

Neighbors who live on Nob Hill Road and surrounding streets were present. Board Chair Bonnie Stone asked if they would like to speak.

“Yes, everybody else is watching and we are concerned about the lake,” Newcastle resident Carol Miller said. “I’m sorry this happened to them, I’m sure there is a lot going on here that we’re not aware of, but on the other hand, it is setting a precedent.”

“I don’t feel comfortable here,” Stone said. “You’re asking for a waiver here. I just don’t feel that it’s right when it was really clear-cut what was approved.”

She read the original conditions from the planning board’s files.

It would be best to contact the contractor again, Stone told the family.

The board unanimously voted to deny the application for an amendment to the 2017 permit.

The project is out of the planning board and appeals board’s hands, Briggs said.

“I would think the next step would be either to move the house back, as was originally approved, or failing that, to go to the Superior Court and see what they might say,” he said in a phone interview after the meeting.

(Editor’s note: This article has been updated to add comments from the architectural designer.)