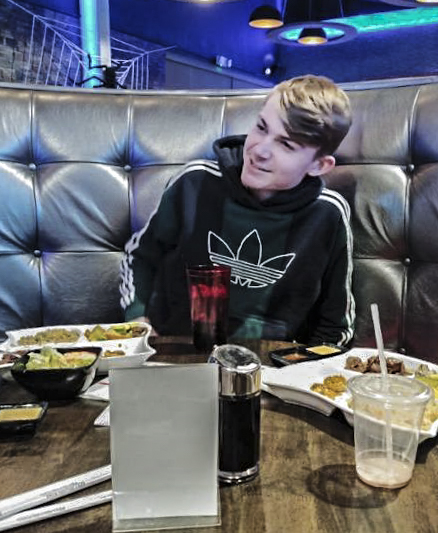 Gage York, 19, of Nobleboro, is in serious condition at Maine Medical Center in Portland after suffering head trauma and other injuries in a Dec. 8 crash in Nobleboro. (Photo courtesy Mary York)

The condition of Gage York, the Nobleboro teenager injured in a Dec. 8 crash, has been upgraded from critical to serious as of Tuesday, Dec. 22, according to a Maine Medical Center spokesperson.

His grandmother, Mary York, said her grandson has not regained consciousness, but has been more responsive to external stimulus. His parents visited him on his 19th birthday, Monday, Dec. 21, and described him “fussing with his tubes” but stopping when a nurse told him to, and becoming agitated during physical therapy.

“I don’t know if he knew,” she said, “but he grabbed onto his father’s hand and kept holding it.”

Mary York said his parents were thankful to be able to visit him on his birthday.

Gage York had been in critical condition for two weeks after suffering head trauma and multiple open fractures in the crash on Lower Cross Road in Nobleboro. He was one of three passengers in an SUV that crashed into several trees after the driver, who police believe had been drinking and speeding, lost control of the vehicle. The driver and the other two passengers, all teenagers, had non-life-threatening injuries, according to the Lincoln County Sheriff’s Office.

As of Tuesday, Dec. 22, the investigation into the crash is still open, according to LCSO Lt. Brendan Kane.

Gage York has had several surgeries since the crash, according to his grandmother. Casts encase the extremities on his left side and his left eye is too swollen to determine the extent of its injury.

Parents John and Rhonda York were able to see him the night of the crash, when his condition was most precarious and there were hour-by-hour updates, according to his grandmother. But they had only been allowed to see him once between then and his birthday. Because he is an adult, COVID-19 precautions prevent his family from staying with him.

Mary York said his parents brought him family photos and an audio recording with the voices of his 8-year-old sister, Emerson, and his older brother, Austin, among others, to the hospital.

They also brought birthday cards, more than usual. His aunt, Joyce York, had posted on social media requesting birthday cards for his parents to read aloud to him. “That,” she said, “would be just as much a gift to the family as it would be for Gage.”

Mary York sent a Berkshire blanket that she had gotten him for Christmas. She has only been able to see him on Zoom, but she hopes the blanket, the photos, and warm wishes from his community will make him feel safer.

Mary York described her grandson as “a very tender, loving young man.  He loves kids and kids love him. His 8-year-old sister, Emerson, is his best friend and his absence has been very difficult for her.”

“He’s very stylish,” she added, her voice catching. “He loves his clothes and his sneakers.”

Gage York just graduated from Lincoln Academy this year. According to Mary York, he was taking some time off and he recently visited friends in Philadelphia. “They have been calling,” she said. “All I can say is that everyone who knows him thinks he’s the nicest kid.”

Mary York said that according to his parents, the doctors seemed pleased with his progress, but could not offer a prognosis. His condition is still day-to-day. “They’re a great team,” she said. “The nurses really care.”

“We’ve got a long, long road ahead,” Mary York said. “But we’re OK with a long road as long as Gage is going to be with us.”

She knows his condition is still unstable and the outlook could change, but “it’s better than it was a week ago,” she said. “His age is in his favor.”

Family members have set up a GoFundMe page at tinyurl.com/yajmthl2 to defray mounting medical expenses. “We appreciate all prayers,” Mary York said. “We appreciate the outpouring of love and support.”

“Gage is very loved,” she said.