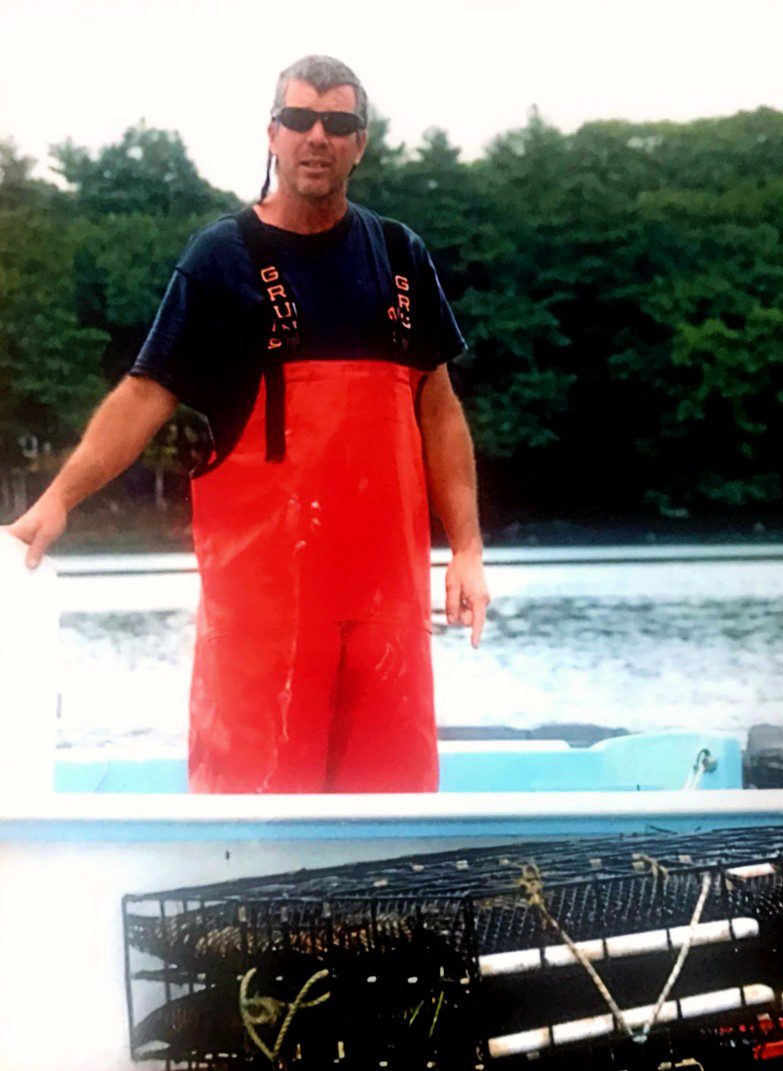 George Faux had long spent his summers on the Damariscotta River, striper fishing and both playing and working on boats, before starting his own oyster farm, Great Salt Bay Oyster Co.

“Being on the water from sunup to sundown in all weather conditions and working with my hands is second nature to me,” he said.

Faux lives close enough to the Damariscotta River to call it his backyard. His 30 years in construction enable him to adapt to change and solve problems at a moment’s notice, both necessary skills for oyster farming.

“Growing oysters depends on the weather, water temperature, water nutrients — it’s constantly evolving work,” Faux said. “You have to watch the oysters grow and figure out how to get them to their best quality.”

“Learn as you go, that’s the methodology of oyster farming,” Faux said.

Faux started his farm in 2014, securing a limited-purpose aquaculture lease of 400 square feet. He now leases just under 2 acres in the uppermost part of the Damariscotta River. His is the closest oyster farm on the Damariscotta River to Great Salt Bay, making it the most nutrient-dense location for farming.

“We have the perfect combination of nutrients from the bay and the volume of ocean water that flows into the river,” Faux said.

Faux now has 75 cages of oysters growing in the Damariscotta River. He is licensed to sell to wholesalers, restaurants, and individual customers from the lease or from his facility at 321 Mills Road in Newcastle. He sells about 30,000 oysters per year.

Great Salt Bay Oyster Co. is one of the smallest oyster farms on the river.

“As a small-scale farmer, I never have a problem with getting rid of our oysters,” Faux said. “Our product is always in high demand.”

“Shellies are salty, sweet, and briny, with a buttery finish,” he said.

Shellies grow for two to three years before harvest, depending on size and quality.

“We strive to consistently harvest 3-inch, cocktail-sized oysters,” Faux said. “The younger the oyster, the easier it is to shuck and eat.”

Cage growing, a popular technique along the Damariscotta, suits Faux’s oysters. The oysters are grown in metal cages with plastic floats tethered together in long strings that allow the oysters to be sunk to the bottom of the channel in the fall and raised to the surface in the spring for their growing season.

“The process keeps the oysters in a constant movement of water,” Faux said.

While the oysters hibernate throughout the fall and into the late spring, Faux operates his residential construction company, George F. Faux Inc., out of Newcastle.

“Someone told me, if you’re going to be an oyster farmer, don’t give up your day job,” Faux said.

Faux hires one farmhand to help him on the river during the peak season. His wife, children, and in-laws help run the farm, too.

His daughter, Shelby Faux, handles marketing for the farm. Shelby and her sister-in-law, Payson Cunningham, own S+P Plant-Based Foods, a Portland-based takeout company.

As someone who grew up on the Damariscotta River, playing with seaweed, skipping rocks, and discovering tide pools, Shelby finds the sustainability of oyster farming inspiring.

“An adult oyster can filter up to 50,000 gallons of seawater in a single day as part of their feeding process,” Shelby said. “I didn’t know how great aquaculture is for our local ecosystem until my dad started the farm.”

Shelby enjoys working on the river from time to time, too.

“We’ll go out early in the morning, when the water is calm and there’s very little wind,” she said. “Every day is a bit different. Some days we’re sorting through oysters by hand, or filling an order and counting how many go into each bag.”

“It’s hard work, but it’s enriching to be out on the river and not sitting behind a computer screen,” she said.

Shelby said that when her dad started the farm, the oyster industry along the Damariscotta River was just gaining momentum. “It’s been fun to watch oyster farming progress from just a hobby to a booming industry,” she said.

“I love that my dad is able to work in an environment that he cherishes, and that he’s able to run a sustainable business,” she said.

By nature, oyster farmers are curious people. Farmers have to experiment with growing techniques, learn to understand the animal’s life cycle, and evaluate shells, as well as the market. Luckily for small farmers like George Faux, the Damariscotta River has attracted a rich community of farmers, scientists, and oyster connoisseurs for its unique ecology.

“I appreciate the tremendous amount of science, discovery, and work that’s come before me,” Faux said.