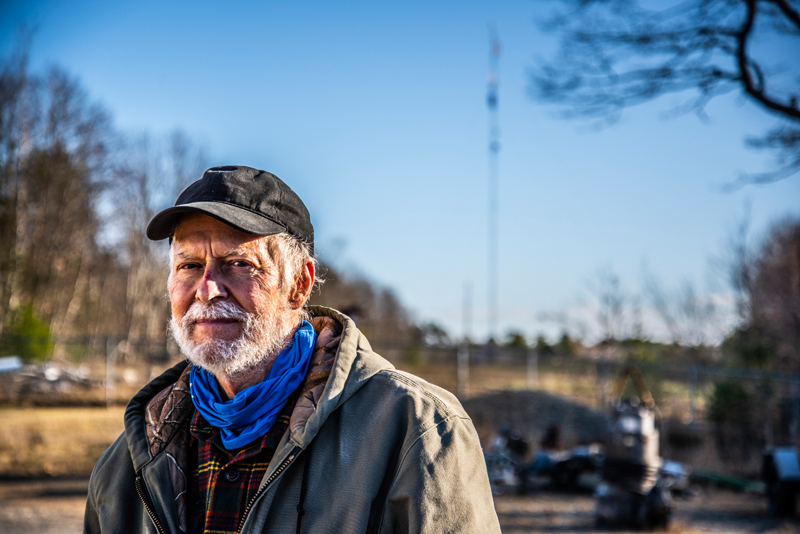 John Fancy, longtime superintendent of the Waldoboro Utility District, will retire from the position at the end of the year.

Fancy will continue to work four days a week as superintendent of the Thomaston Pollution Control Department for the foreseeable future. He has held that position since 1989. He looks forward to having three days off instead of two and plans to spend the extra time on genealogical research at his home in Appleton. 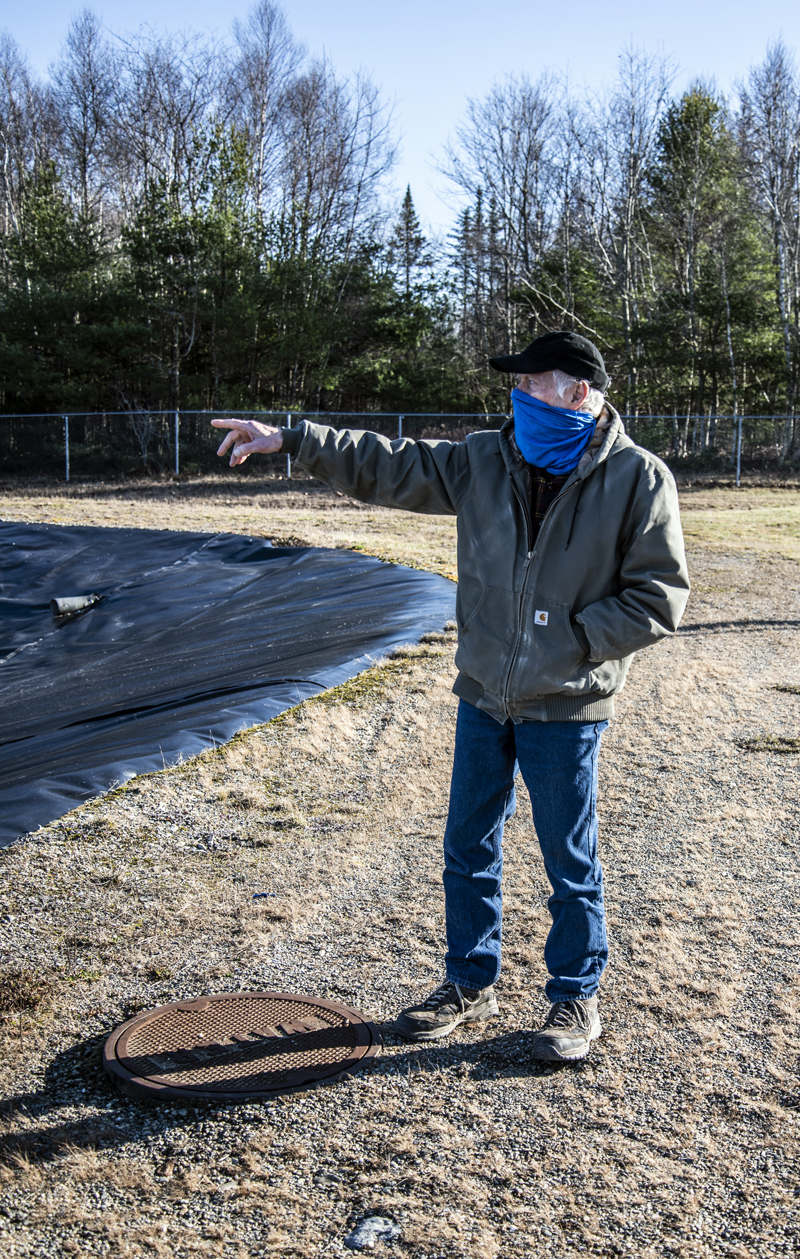 John Fancy points out the aeration system in the treatment lagoon in Waldoboro on Dec. 3. The cover near his feet is where Waldoboro’s sewer lines ultimately converge to disperse the town’s waste into the facility. (Bisi Cameron Yee photo)

Jeff McNelly, chair of the Waldoboro Utility District Board of Trustees, said the trustees will develop a transition plan for the utility and look at the “best way to replace (Fancy) for the long term.”

Fancy will be available for consultation as they work through the process. “We will be looking for someone with capability, resources, and depth,” McNelly said.

Two employees, a part-time operator and a part-time bookkeeper, will continue to see to the day-to-day operations of the plant.

In 1972, the Clean Water Act brought renewed attention to the issue of polluted water systems and municipalities needed experts to help them meet new federal requirements. By then, Fancy was already focused on a career in the wastewater industry. He did not have a college degree, but his experience as a construction engineer and knowledge of environmental issues made him uniquely suited to meet the demands of the new regulations.

“Cleaning up the environment was important to me,” Fancy said. “And it was an area of real need. It was difficult to find qualified individuals willing to work in the field. So there was a need and a benefit.”

Fancy was involved with the Waldoboro Utility District from the beginning. While employed by the engineering firm that built the original plant in the 1960s, Portland’s E.C. Jordan, Fancy was tapped to get the utility online and train its first operators.

Several years later, the Waldoboro Utility District contacted Fancy with an offer to oversee plant operations. Fancy became the utility’s part-time superintendent in 1971. He would work one day a week as a contract employee in Waldoboro for the next 49 years.

His consulting firm, John Fancy Inc., which he started in 1971, and a team of 11 employees continued to work with other wastewater treatment plants “from Calais to Bethel,” sharing their expertise, getting and keeping plants operational, and training their staffs. John Fancy Inc. was a resource for the wastewater treatment industry in Maine until about 10 years ago, when Fancy “tired of the travel” and was satisfied with having “two jobs close to home.”

In 1996, Fancy started working up plans to replace the original Waldoboro plant. That plant was by the Main Street bridge over the Medomak River, next to Storer Lumber. It was a mechanical wastewater treatment system — a very early design and, according to Fancy, not one of the most successful.

The new plant came online in 2001, north of the village, between Routes 220 and 235. It is a lagoon treatment plant in which wastewater is broken down by bacteria until it meets the quality standards of drinking water. The treated effluent is then applied to five 60-acre spray fields on the 300-acre site.

Fancy said recycling wastewater in this manner is much more sensible than discharging it. “It was a good move for Waldoboro,” he said. The lagoon system is “more economic and simpler. It’s one of the best things I did in my career.”

Moving the site away from the river also had a tremendous effect on both the local ecology and the local economy. “For the last 19 years there has been no discharge of waste into the Medomak River,” Fancy said. Since the river supports one of the major shellfish harvests in the state, Fancy considers this a high point of his career. 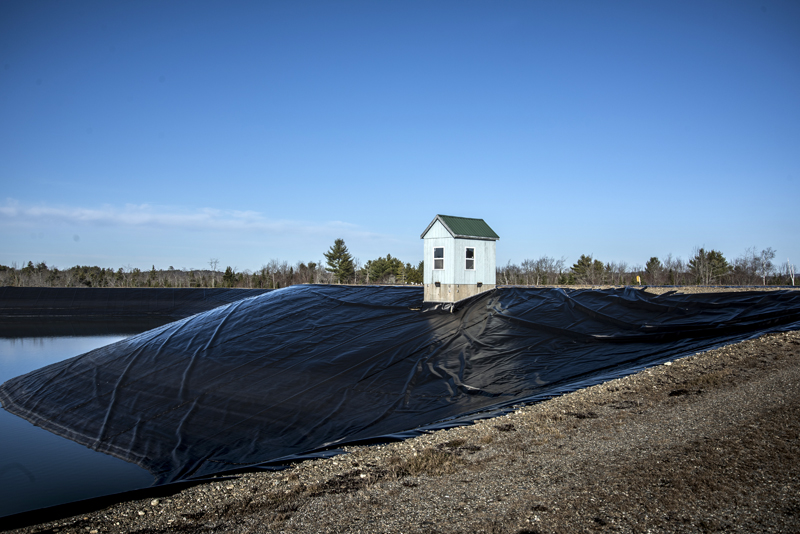 A discharge shed overlooks the holding lagoon at the Waldoboro Utility District on Dec. 3. The sheds keep the water flowing through concrete pipes between the lagoons from freezing. (Bisi Cameron Yee photo)

Computer screens in Fancy’s office allow him to easily review the status of plant components and make any necessary adjustments. He tracks information for the federal Environmental Protection Agency, ensuring that the plant complies with regulations.

He also spends a good deal of time checking emails, sometimes 50 a day. He said he gets a surprising number of emails from residents who want to check on potential conflicts with sewer lines, where they are in relation to trees and landscaping.

“Keeping track of what’s going on in the community is a major part of what I do. In order to control costs and minimize wear and tear on the system, it pays to respond to citizens’ questions,” he said.

One of Fancy’s favorite tasks is introducing the plant and its concepts to kids during field trips. “I hope they get a little more awareness of water and its importance in their lives. And a little more respect for it — don’t leave the faucet running,” he said. 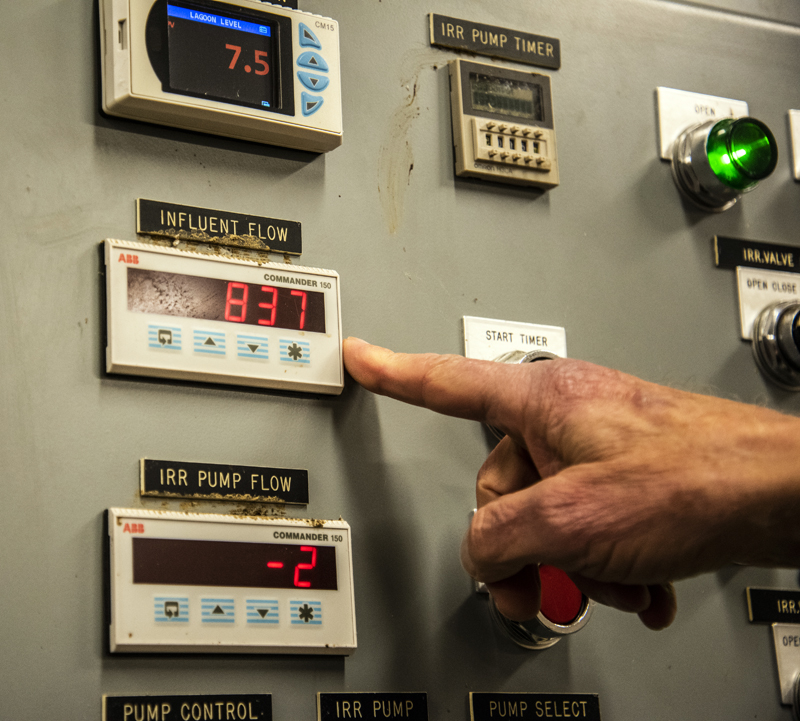 Fancy added that he almost always has a project: cleaning sewers, checking pump stations. Last year he was responsible for rebuilding 87 manhole covers in Waldoboro for the benefit of those driving on town roads. “I’m rarely bored,” he said.

Fancy has the admiration and respect of town leaders.

Waldoboro Board of Selectmen Chair Abden Simmons, a fisherman and seafood dealer who relies on a clean river for his living, said Fancy has been “instrumental in identifying a lot of the pollution sources we’ve found in the river, helping us with smoke-bombing and finding old pipes. His knowledge of the old and new septic systems and upgrades is extensive.”

McNelly, chair of the Waldoboro Utility District, said the utility “will be losing a great resource. He’s provided a valuable service for 50 years.”

Waldoboro Town Manager Julie Keizer said in an email that “Waldoboro is proud to have benefited from John’s expertise over the years. He has been extremely helpful to the town well beyond the utility. He has been a champion of the health and sustainability of the Medomak River and his knowledge has been invaluable.

“On a personal note, his institutional knowledge of Waldoboro has been very helpful, and I very much appreciated his insight and guidance since I arrived in town. Others will serve in his position but he will never be replaced!” 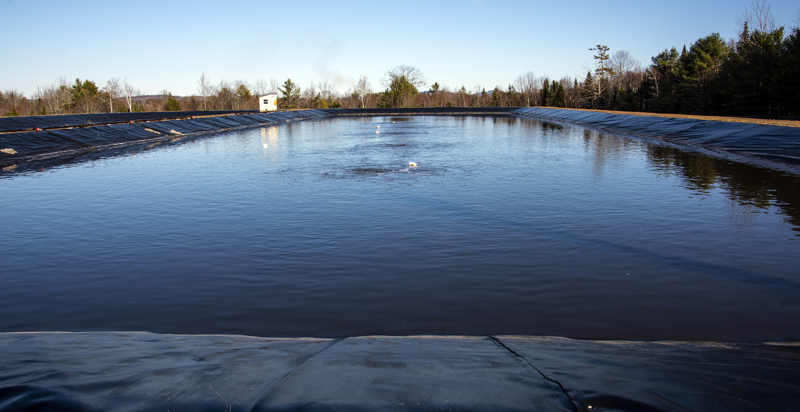 Large aerators mix wastewater in the treatment lagoon at the Waldoboro Utility District on Dec. 3. Keeping the wastewater in motion allows bacteria to find and break down waste materials, ultimately leaving potable water that is then sprayed onto surrounding fields. (Bisi Cameron Yee photo)

Selectman Bob Butler, a former chair of the board, called Fancy “a personable and forthcoming man” and “a true gentleman who has always gone above and beyond to ensure the health of Waldoboro’s citizens.”

“We will miss John and wish him all the best as he begins to write the new chapters of his life,” Butler said in an email. “Thank you, John Fancy.”

Fancy will continue to be involved in a number of exciting projects with the Thomaston Pollution Control Department, from the $1.2 million solar installation that generates enough electricity to run both the treatment plant and the town offices to adding LED lights and smart controls to streetlights to reduce energy use and light pollution.

Fancy believes “it’s not as simple as just running a treatment plant — you have to look at the whole municipality, the whole community, and look at pollution.”

“Wastewater is not the end of the world — man-made chemicals are the real problem,” Fancy said. And after almost 50 years in the wastewater industry, he should know.