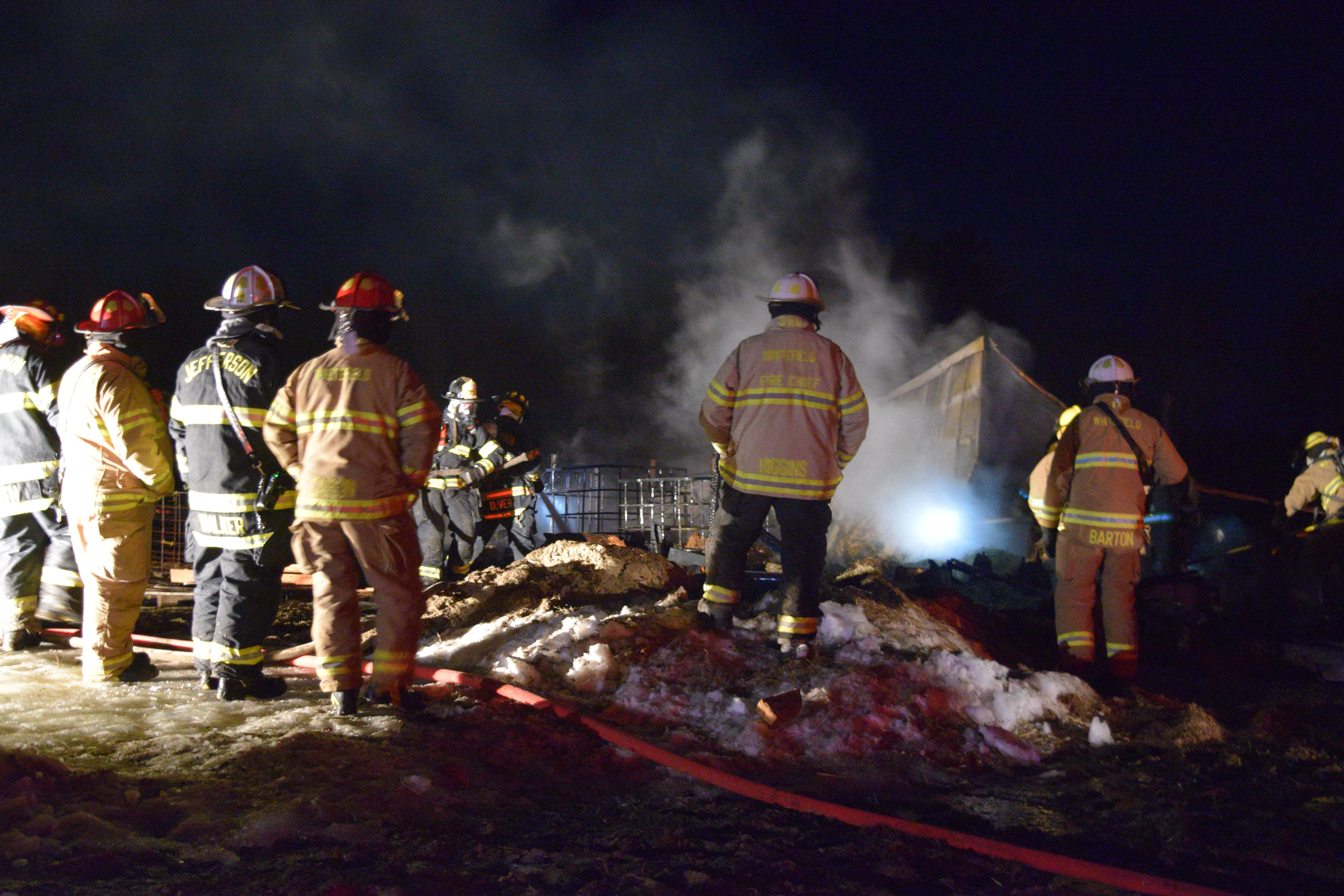 Area firefighters on scene of a barn fire in Jefferson on the night of Sunday, March 17. Farm animals died as a result of the blaze. (Jessica Clifford photo)

A sow, its seven piglets, and four calves died, though five pigs were rescued, in a nighttime barn fire at 116 Bunker Hill Road in Jefferson, Sunday, March 17.

Donna and Andrew Finch own the property, while their grandson, Morgan Gallione, 23, of Nobleboro, owns the animals in the 16-by-24, one-story barn.

The barn is a total loss, Jefferson Fire Chief Walter Morris said. The only part remaining is the metal roof.

Andrew Finch woke up to see the barn engulfed in flames and reported the fire, according to the Finches’ daughter and Morgan Gallione’s mother, Hilary Gallione.

“The firefighters were assisted by the residents of the property, who guided the pigs to another pen away from the fire,” he said. Other animals, such as chickens and cows, were in a separate building, safe from the fire.

The name of the farm is Hidden Fortune Farm, according to Hilary Gallione. Her parents originally raised sheep on the farm, while their grandson raises chickens, cows, and pigs. He sells natural meats, eggs, vegetables, and maple syrup at a farm stand on the property.

“This has been heartbreaking to lose the animals we care so much for and a loss to us all,” Hilary Gallione said. “But Morgan is persevering and working hard to rebuild – a true farmer at heart!”

“There is farm insurance, but not everything is insured,” she said.

According to Morris, the fire could have started because of electrical reasons.

“Due to the damage, the exact cause of the fire remains undetermined at this time,” Morris said. “The barn was insured, so any further investigation would be conducted by the fire insurance company.”

There were over 10 bales of hay in the barn, serving as fuel for the fire.

The Jefferson, Newcastle, Somerville, Waldoboro, Whitefield, and Windsor fire departments responded to the scene. The Alna Fire Department was dispatched, but turned around before arriving, Morris said.

“We all are very grateful for the volunteer fire departments and thank them for the work they did to help,” Hilary Gallione said.