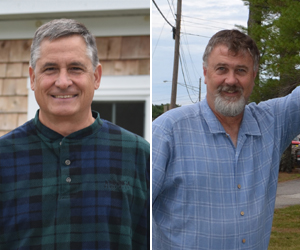 Wayne Farrin, D-Jefferson, and Michael Lemelin, R-Chelsea, are seeking their parties’ nominations for Maine House District 88, which consists of Chelsea, Jefferson, part of Nobleboro, and Whitefield.

Farrin said he has a long-held interest in running for state office.

“I’ve always wanted to, been interested, but never felt like it was the right time to do it, having to run a business and all, but I feel the time is right now,” he said. “I want to get people talking, work across the aisle, bring a little common sense to the State House.”

Farrin sits on the Damariscotta Region Chamber of Commerce Board of Directors and serves as an election warden in Jefferson.

Lemelin did not respond to a request for comment, but the Maine Commission on Governmental Ethics and Election Practices lists him as an active candidate.

A businessman and former pilot, he owns Curves in Gardiner and works as the business manager of his wife’s chiropractic office in Hallowell. In the past, he opened a Red Robin in Augusta and ran 11 Subway restaurants in the area.

He worked as a pilot from 1989-1996, but stopped flying to take care of his son Christian, who has spina bifida. He has two other children.

Lemelin sits on the RSU 12 Board of Directors. He previously ran for the House District 88 seat against Maxmin in 2018.

Farrin is a clean elections candidate, while Lemelin’s campaign will be traditionally funded.

Party candidates have until March 16 to qualify for the primary ballot, while independent candidates may file until June 1. The state primary election is June 9.