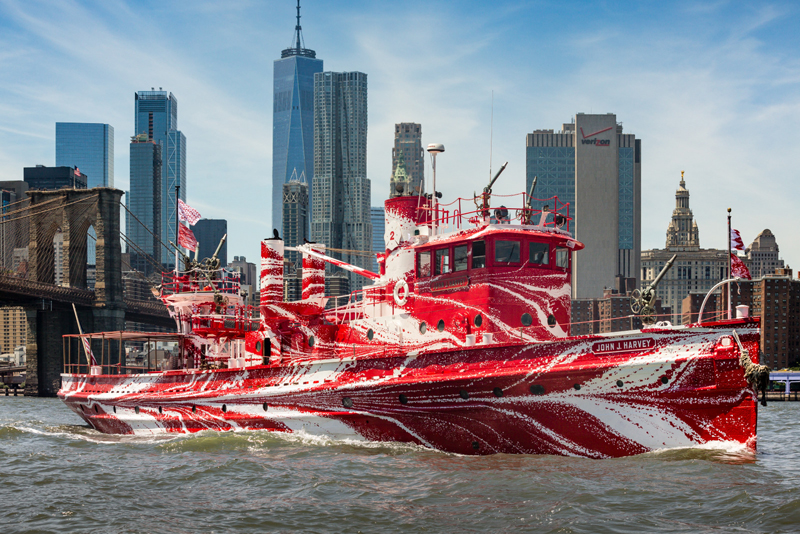 The John J. Harvey with the New York City skyline in the background. A seasonal resident of South Bristol owns the historic fireboat. Its temporary paint job mimics the “dazzle” camouflage of World War I. (Photo courtesy Public Art Fund)

A historic New York City fireboat, currently a floating art exhibit that commemorates the 100th anniversary of World War I, has a connection to South Bristol through its owner.

Chase Welles, a seasonal resident of South Bristol, has owned the John J. Harvey since 1999. The volunteer-operated vessel serves as an educational center and operational museum based at Pier 66 in New York City.

The last Saturday of each September since his purchase of the John J. Harvey, Welles has skippered a trip aboard the historic boat for friends and family.

Before he owned the John J. Harvey, Welles and some friends owned Shellfish, a 65-foot mahogany state of Connecticut boat.

“My friends and I were the curators of this old wooden boat for a number of years,” Welles said in a phone interview. “It was great. We would even bring her up to Damariscotta from New York.” The last day Welles and his friends owned the boat, they decided to take it out for a final ride on the Hudson.

As the owners of Shellfish got ready to leave the pier where the boat was kept in New York City, the man who ran the pier caught their attention. He knew they were selling the boat and had an idea of what their next purchase should be.

“We weren’t really interested in a steel boat. We wanted another wooden boat. But then we turned that corner and saw John J. Harvey, and I just thought, ‘Oh my god, look at that boat. It’s so beautiful.’” He purchased the fireboat when it  went up for auction two years later.

John J. Harvey was an active fireboat from 1931-1994. It was the Fire Department of New York’s most cutting-edge fireboat in 1931, the first to be powered by internal-combustion engines and to pump and maneuver simultaneously.

After retirement, the boat was recalled to service on Sept. 11, 2001 to pump water into Lower Manhattan while water mains were down. 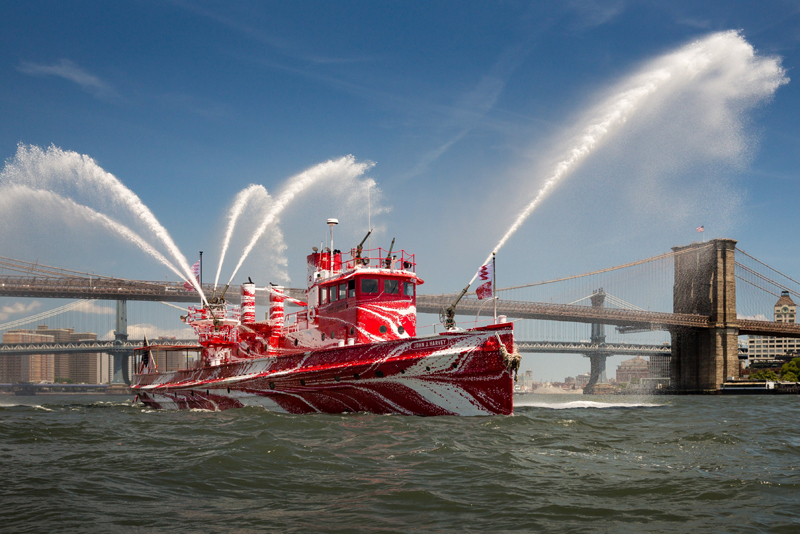 The John J. Harvey was an active Fire Department of New York fireboat from 1931-1994. A seasonal resident of South Bristol now owns the historic vessel, which functions as a floating museum in New York City. (Photo courtesy Public Art Fund)

As much history as the boat already had, it recently acquired a different sort of connection with the past. The John J. Harvey was repainted this summer as part of an exhibition co-commissioned by the Public Art Fund and 14-18 NOW, “Flow Separation.”

Artist Tauba Auerbach gave the fireboat a new coat of paint, a striking red-and-white pattern that is Auerbach’s modern interpretation of the “dazzle” technique used on warships in World War I.

What the Public Art Fund describes as “the unlikely vibrant camouflage designs” of dazzle were used, not to hide ships, but rather to confuse enemy submarines tracking ships’ movements.

A retired FDNY fireboat may seem an odd choice for an exhibit remembering World War I, but the artist had her reasons for choosing the boat.

Allegra Thoresen, of the Public Art Fund, said: “The John J. Harvey seemed a like a good fit for this project for many reasons: it was possible to provide free rides to the public on it, there was a nice history with how fireboats lead merchant ships – some of which were dazzled – out of New York’s harbor during World War I, and Tauba really liked that the fireboat had its own history and is a benevolent machine.”

The exhibition will close in May 2019, after which the John J. Harvey will be repainted.

John J. Harvey has generally gone out for three to five cruises per week under Welles’ ownership. The trips to Damariscotta once made in Shellfish, though, are no longer a possibility.

“The Coast Guard gets very itchy if we go too far offshore” in the historic fireboat, Welles said, so it stays within a few miles of land. Still, the boat gets a taste of Maine during each September cruise, when Welles’ “summer friends” from South Bristol and other friends and family join him on the boat.

Welles and his family have been part of the South Bristol community “pretty much since the end of the Civil War,” he said. A prominent New York City commercial real estate broker, Welles owns a home on S Road, where he fondly remembers his grandmother living for many years.

A teacher and first responder, she fully immersed herself in what had once been only her part-time home for over 40 years. Welles considers himself “lucky enough to be a lifelong, multigenerational summer person” in the area.

Welles extended an offer to the people of the South Bristol community to cruise on the John J. Harvey. He asks anyone interested in planning a group trip to email cwelles@scg-retail.com with the subject line “Fireboat.”

(Correction: An earlier version of this article online and on page 1A of the Aug. 30 print edition incorrectly reported the end date of the “Flow Separation” exhibit. The exhibit will close in May 2019. The Lincoln County News regrets the error.)