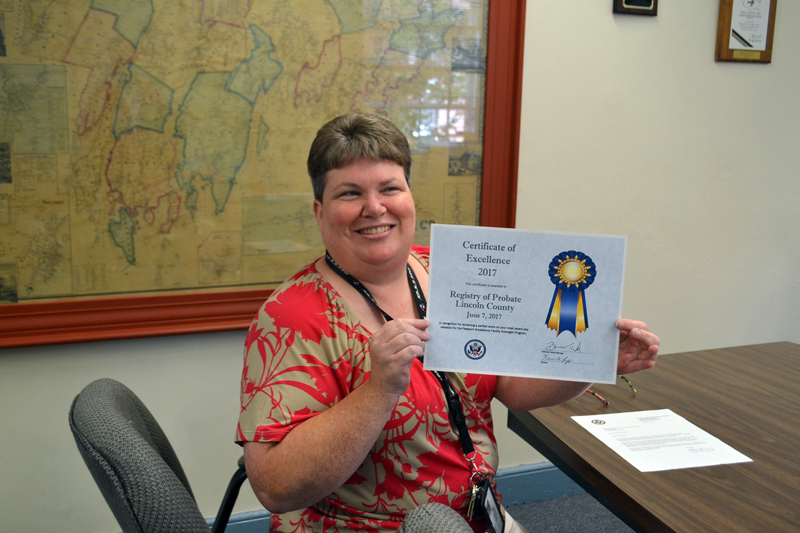 The Lincoln County Board of Commissioners, during its meeting Tuesday, Aug. 1, congratulated Lincoln County Register of Probate Catherine Moore for receiving a certificate of excellence from the U.S. Department of State National Passport Center.

According to a letter from the center, during an audit of the Lincoln County Registry of Probate in May, the program analyst performing the audit was very impressed with the facility and found everything to be in compliance with the Passport Agent Reference Guide.

“We would like to take this opportunity to say thank you for your dedication and participation in the Passport Acceptance agent program. We are sending a certificate of excellence for the outstanding job that the facility does every day. We are happy to say that no required improvements are listed for your facility,” the letter from the center read.

Moore told the commissioners the county has issued about 300 passports to date this year, and 50 just in the month of February.

Passport applications are going up due to uncertainty about the ability of Maine driver’s license holders to use their licenses to board commercial flights because the state was not in compliance with federal law. The Legislature has since passed a bill to address the issue.

The commissioners received a copy of the Maine Department of Transportation’s 2016 bridge inspection report for the Big Bog Bridge at Hibberts Gore. The report identifies deficiencies, including the need to install approach guardrails.

County Administrator Carrie Kipfer told the commissioners she plans to visit the site to better understand what the DOT wants.

“The bridge and guardrail deficiencies should be addressed as soon as practical to ensure continued use of the bridge,” DOT Assistant Bridge Maintenance Engineer Benjamin Foster said in the letter. “Neglect of these deficiencies may result in a diminished function of the bridge through load posting or even closure.”

The bridge will be inspected again in 2018.

Brackett said there were 141 inmates at Two Bridges Regional Jail on Tuesday. Another 121 people are in jail diversion programs, 82 through the sheriff’s office and 39 through Maine Pretrial Services Inc.

Communications Director Joseph Westrich requested and received the approval of the commissioners to hire Brenda Parker, of Dresden, as a dispatcher.

Emergency Management Agency Director Casey Stevens received authorization from the commissioners to apply for a grant from the U.S. Department of Homeland Security.

The county will apply for $66,240.04 to replace radios for the sheriff’s office and the four municipal police departments in the county, $5,000 for the county hazmat team, $1,500 for the amateur radio team, and $1,250 for the search-and-rescue team.

The commissioners approved a purchase order to repair the 2010 Peterbilt at the Lincoln County Recycling facility at a cost of $4,230.15.

The commissioners authorized the acceptance of $896 from the DOT Local Road Assistance Program.

The commissioners voted to go into executive session to discuss a personnel matter and a legal issue.