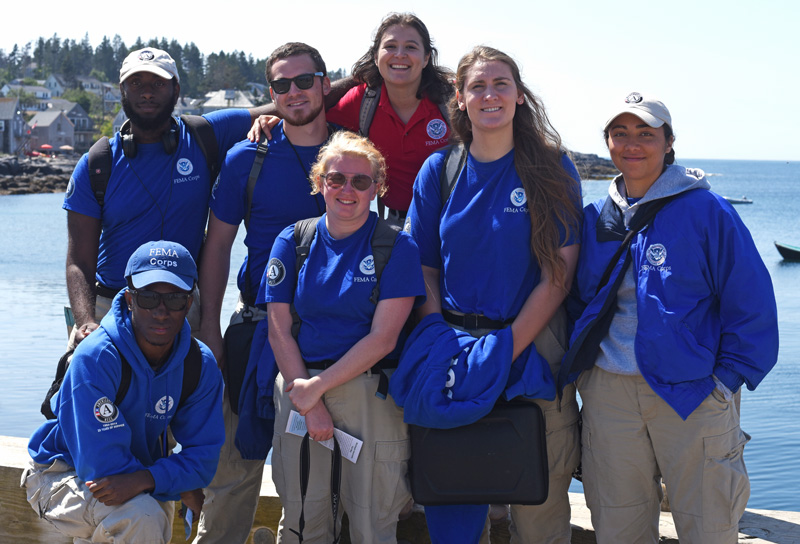 Members of the FEMA Corps visited Monhegan Island on Monday, Aug. 20 to plan for how the federal government would deliver and distribute supplies in the event of a disaster.

The “Summit 7,” a Mississippi-based group of seven 18- to 24-year-olds with FEMA Corps, has been working in Maine since June to determine the best sites for CPODS, or community points of distribution.

These sites are where supplies such as food, water, and blankets would be distributed 72 hours after a disaster. The team has been working in Lincoln County and living in Dresden since Aug. 6.

Members of the FEMA Corps receive three “rounds,” or assignments, during their nine-month tenure in the program. The Summit 7 team is focusing on disaster survivor assistance and individual assistance.

The trip to Monhegan is closing out the group’s second round, according to Tontisakis, the team’s 22-year-old leader.

The team’s first round was in Puerto Rico, working in housing and general assistance.

Tontisakis said working in Puerto Rico showed why plans like the ones they’re implementing in Maine are so important.

“When disaster hit Puerto Rico, it was apparent that there was no plan for distributing commodities,” she said.

For Lincoln County, the team has identified 15 locations that could be used in a disaster for commodity distribution, including at schools, fairgrounds, and town halls.

They identified Great Salt Bay Community School in Damariscotta as a potential staging site for the entire county, where necessities sent by the federal government would be brought for distribution where needed.

“Maine has its own unique challenges,” Tontisakis said, using Monhegan as an example, since it is 10 miles offshore.

On Monhegan, the team chose the dock as a central location to give out water and food in the event of an emergency, such as a hurricane. The team visited the island in order to inspect the dock and speak to local officials about their idea.

“We just go to make sure it’s all possible,” Tontisakis said.

Tontisakis spoke of FEMA’s “adopt a POD” program, which allows groups such as schools and Boy Scout troops to volunteer to help in an emergency. These groups would receive training on how to run a point of distribution.

“There’s a lot of community that wants to help,” Tontisakis said. “This is just another route to do that.” 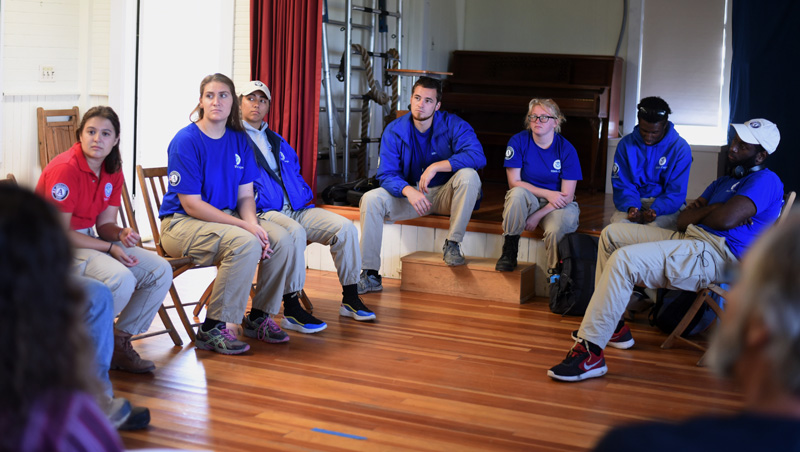 Pamphlets will be sent to local schools and groups in order to advertise the program, she said.

Tontisakis said community members could also “adopt a route,” or use their boats to bring supplies to places like Monhegan.

“You want to get your water bottles or food from your neighbor, not some fed that doesn’t know what you’re going through,” Tontisakis said. “A lot of times community members want to help, but they haven’t found their niche.”

Community members adopting a route would also lower costs during a disaster, since helicopters would not need to be contracted as often to bring supplies, she said.

Jessica Stevens said there are only seven fishermen on the island, and not all boats would be able to carry pallets.

Tontisakis said helicopters are still an option, and perhaps ferry services, such as Hardy Boat Cruises, would be willing to transport pallets.

There would need to be a contracted forklift on the mainland, and one on the island, to lift 4-by-4-foot pallets of food and water, and gas for the boats transporting the pallets.

“Maine is so self-sufficient … we’d like to involve the community,” Tontisakis said.

Brassard said the number of people on the island in an emergency may pose a challenge. There are only about 50 full-time residents of the island, however, during the summer months, there can be over 1,000 people during the day.

He said people staying in cottages may have stocked food, but those staying in the hotel or only visiting for the day would not be as prepared, so the amount of supplies needed would fluctuate depending on the day.

Simmons, one of the Summit 7, asked when the last disaster hit Monhegan. Jessica Stevens said that probably the last big storm was in 1978, however, some recent storms have done shoreline damage.

“But the water is getting warmer,” Brassard said, meaning more storms could come in the future.

According to the Gulf of Maine Research Institute, over the course of the last decade, the Gulf of Maine has warmed faster than 99 percent of the global ocean. The institute lists man-made global warming, melting in the arctic, and changing ocean circulation as key reasons for the warming.

In the past, Maine has often been spared from hurricanes due to the colder water temperatures.

The team inspected the stone and cement dock, finding that in the event of an emergency, it should work as a distribution site.

The team also looked at the power-operated lifts on the dock, which are rated to hold a maximum load of 1,000 pounds.

Since the lifts would be unusable during a power outage, it was decided that food and water may need to be carried off the boat by hand in the event of an outage.

The team also identified Fish Beach as a possible location to bring supplies ashore, as long as a memorandum is signed by the property owners granting permission.

“Thanks for the work you’re doing,” Jessica Stevens said.

The FEMA Corps team will stay in Lincoln County until Friday, Aug. 24, and does not know where it will be sent next.