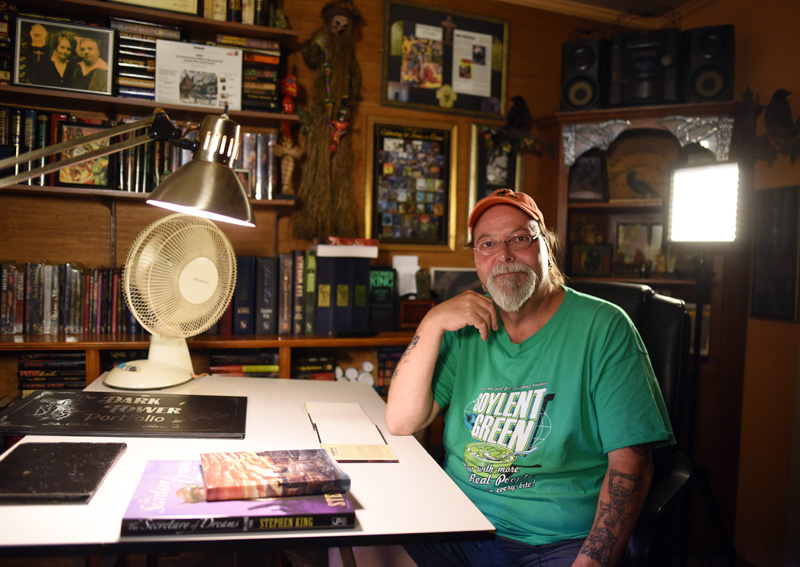 Artist Glenn Chadbourne sits in his home office in Newcastle, surrounded by books he has illustrated, including many by famed horror author Stephen King. (Jessica Picard photo)

Chadbourne has illustrated countless stories over the years and began working with King in 2005. He has been The Lincoln County News’ editorial cartoonist for more than 30 years.

Chadbourne said Elephant House Studios, of London, England, reached out to him a little over a week ago, saying they wanted to have him in the film.

The working title of the film is “The Shocking Life and Work of Stephen King,” according to director and producer Elliot Kew.

“It’s looking at how his life has kind of informed his novels,” Kew said. “I felt that (interviewing) an illustrator was really important. It’s what grabs your attention.”

Kew said he thinks Chadbourne’s work is fantastic, and would be a great addition to the film.

Kew interviewed Chadbourne in his Newcastle home, where he grew up and has lived for most of his life. He now lives there with his wife, Sheila, and their dog, Evan.

He showed Kew his office, which is filled to the brim with books and illustrations, many featuring the undead and other ghoulish subjects, favorite topics for both King and Chadbourne.

Chadbourne said he has been drawing for most of his life, and being an only child gave him plenty of time to be creative.

“I always just drew,” he said.

Chadbourne said he has been a fan of horror books and movies since childhood, and even wrote a book report on King’s “Carrie” in high school.

Chadbourne recently had the opportunity to illustrate a collector’s edition of “Carrie,” years after it influenced the artist in his teens.

“King told me this was my best work,” Chadbourne said of the 40th anniversary edition of “Carrie.”

Chadbourne said he feels very lucky to make a living as an illustrator.

In his office, Chadbourne has framed holiday cards from King, which he asked Chadbourne to draw for him.

One card, which features an undead couple kissing under mistletoe, is inscribed with “Happy holidays to my favorite artist!” in King’s looping handwriting.

“It’s a dream come true,” Chadbourne said. “Like being a guitarist and being asked to jam with The Stones.”

Kew asked Chadbourne questions about his work, and why he thinks King’s work is as popular as it is.

“It stays with you,” Chadbourne said of King’s work.

Kew said they have been filming for about two weeks and will be traveling for about six or seven more weeks to complete the interviews for the documentary.

After filming in Maine, Kew will travel to Los Angeles to interview actors from film adaptations of King’s novels, such as Nancy Allen, who played Chris Hargensen in “Carrie” in 1976.

The film is scheduled to air around Halloween on Channel 5 in the UK, and will be sold worldwide on DVD.