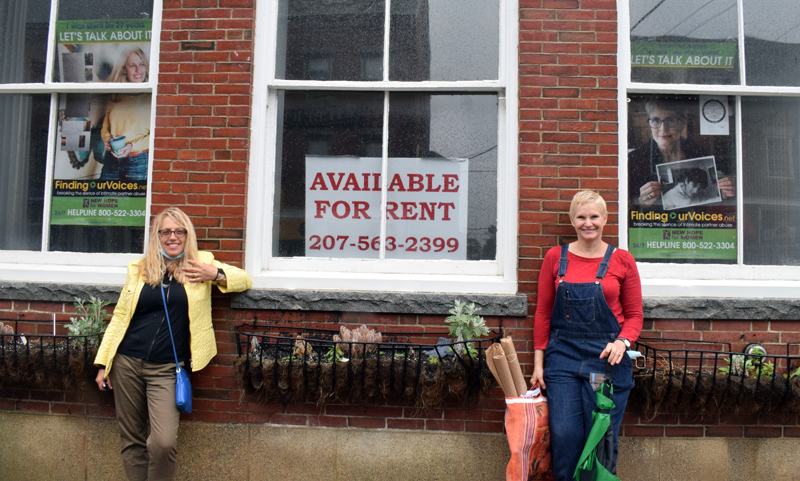 Finding Our Voices founder Patrisha McLean (left) stands with local volunteer coordinator Eve Jamison in front of 17 Elm St. in Damariscotta on Thursday, June 11. The duo hung nearly 50 banners in Damariscotta and Boothbay Harbor, including the one featuring McLean in the window at left. (Evan Houk photo)

Finding Our Voices, a Camden-based nonprofit focused on ending domestic violence and intimate partner abuse, hung banners in the windows of Lincoln County businesses to raise awareness of the issue Thursday, June 11.

Patrisha McLean, the founder of the group, and Eve Jamison, a local volunteer coordinator, hung nearly 50 banners in Damariscotta and Boothbay Harbor storefronts on the rainy Thursday afternoon.

Each poster features a large photographic portrait of a different survivor of intimate partner abuse, along with a quote from the person and documentation of the abuse. Each poster contains contact information for the domestic abuse agency for the area where the posters are hung.

The agency that serves Lincoln County is New Hope For Women and the hotline number is 800-522-3304.

McLean said the goal of Finding Our Voices is to break the silence and raise awareness about the growing problem of domestic abuse in Maine and across the country.

“We are breaking the silence of domestic abuse, conversation by conversation,” McLean said Thursday.

Among the establishments in Damariscotta that offered their prime visual real estate to Finding Our Voices until at least July 15 were: Cupacity, Newcastle Realty, Cheney Insurance, Renys and Renys Underground, Neighborhood Clay, empty commercial spaces owned by Peter Adams, Sproul’s Furniture, and Milling Around.

“They realize this is a really important issue to speak out about,” McLean said in reference to the support from businesses.

McLean said Finding Our Voices has hung 56 posters across the Midcoast since beginning the project in April – in places like Camden, Rockport, Rockland, Islesboro, and Vinalhaven.

Banners have also been hung in Ellsworth, Machias, and Calais, and 13 more Maine towns will see them in July.

The group has a point person in each community to coordinate the placement of the banners in local businesses that are willing to display them in a downtown street-facing window space. 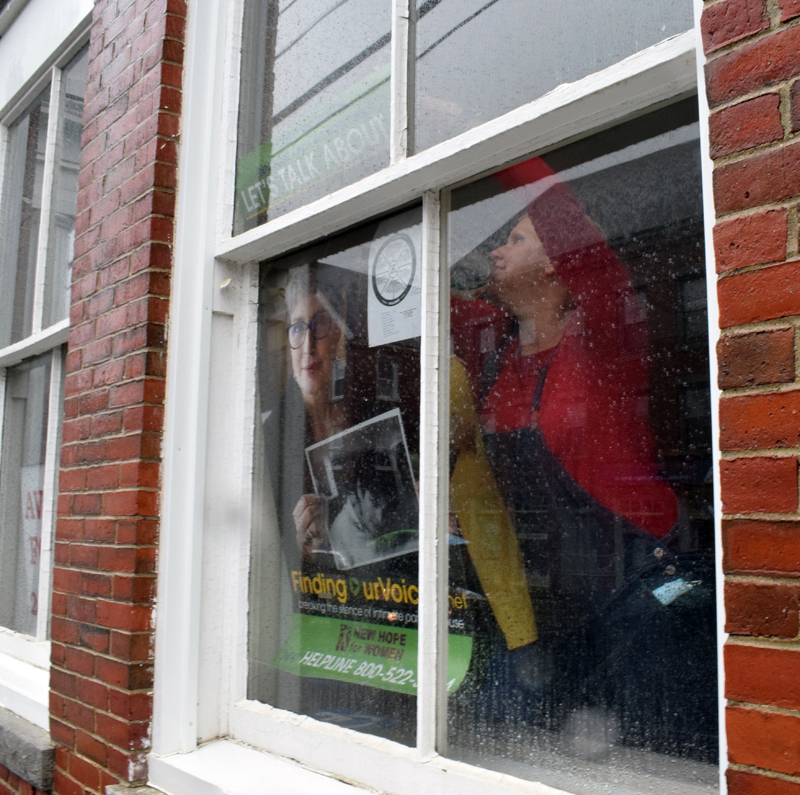 Eve Jamison, a local volunteer coordinator for Finding Our Voices, hangs one of the group’s banners at 17 Elm St. in Damariscotta on Thursday, June 11. (Evan Houk photo)

“We’re putting them only in businesses in downtown areas facing the street, where they will be highly visible. This way, people can see them even when they are driving by,” McLean said.

McLean called intimate partner abuse a silent killer that does not discriminate.

“It can happen to anyone,” she said.

She said the women who have shared their stories are diverse and range in age from 18-80. Among them are an architect, a prisoner, a prison guard, nurses, and a TV news anchor.

McLean said there is a correlation between sexual assault and domestic violence that makes it extremely difficult for women to come forward and tell their stories.

“It’s hard to wrap your head around being raped or assaulted by someone you are close to,” McLean said.

Many women also experience, or fear, negative repercussions from their partners for speaking out, McLean said.

McLean sees Finding Our Voices as filling a gap in the broader public conversation about sexual assault and violence.

“No one talks about this,” she said, noting that the national #MeToo movement does not address the issue of domestic abuse.

The #MeToo movement is a movement against sexual harassment and sexual abuse that gained increased prominence in the wake of the widespread sexual abuse allegations against movie mogul Harvey Weinstein in October 2017.

McLean said the Finding Our Voices traveling exhibit had events planned for the spring, but had to cancel them when COVID-19 arrived in Maine.

McLean said that everywhere she goes, she hears more stories of domestic abuse that happen close to home. A woman in Boothbay Harbor told her a story about a 2004 double murder that happened two blocks away from her home. A man killed both his wife and his mother, McLean said.

McLean said she endured 29 years of abuse of every kind at the hands of her husband, folk singer Don McLean. She said she endured physical, mental, emotional, and sexual abuse through those years.

When Don McLean was arrested in 2016, everything became public and Patrisha McLean became emboldened to tell her story, leading to the creation of Finding Our Voices and the traveling exhibit, “Finding Our Voices: Breaking the Silence of Domestic Abuse,” which debuted on Valentine’s Day in 2019.

McLean also hosts a radio show that airs on 89.9 WERU community radio and is available to stream at findingourvoices.net.

McLean said she hopes to hang more banners in Wiscasset, but needs to find a local volunteer to coordinate with the businesses in the area. To help, email hello@findingourvoices.net.