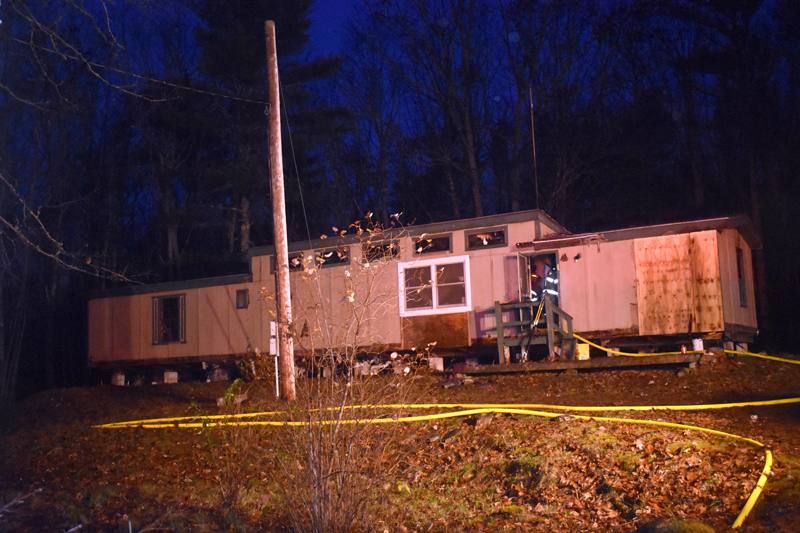 Firefighters work at a trailer at 414 Sennett Road in Jefferson the afternoon of Thursday, Nov. 7. A bus driver reported seeing smoke coming from the trailer, according to Jefferson Fire Chief Walter Morris. (Alexander Violo photo)

Jefferson firefighters quickly put out flames at a trailer on Sennett Road the afternoon of Thursday, Nov. 7. No one was hurt in the fire.

A school bus driver reported seeing smoke at the trailer, at 414 Sennett Road, according to Jefferson Fire Chief Walter Morris. A neighbor confirmed the fire and said the occupant of the trailer was out at a doctor’s appointment.

“There were no people or pets inside,” Morris said.

Robert O’Brien, of 398 Sennett Road, owns the trailer. A tenant lives alone in the trailer, according to Morris.

When firefighters arrived, “There were no visible flames, but a good amount of smoke coming from the eaves and roof of the trailer,” Morris said.

Firefighters shut off the trailer’s fuel oil tank and circuit breaker before entering.

“When we got the door open, flames were coming out of the top row of windows and we were able to knock the fire down real fast,” Morris said.

After extinguishing the flames, firefighters looked behind walls and used thermal-imaging equipment and gas meters to ensure it was fully out.

“Basically what we do is peel back walls and ceilings that show evidence of heat discoloration or charring to make sure there are no embers, especially with insulation, so it doesn’t smolder and rekindle later on,” Morris said.

Morris described the trailer as an older model. 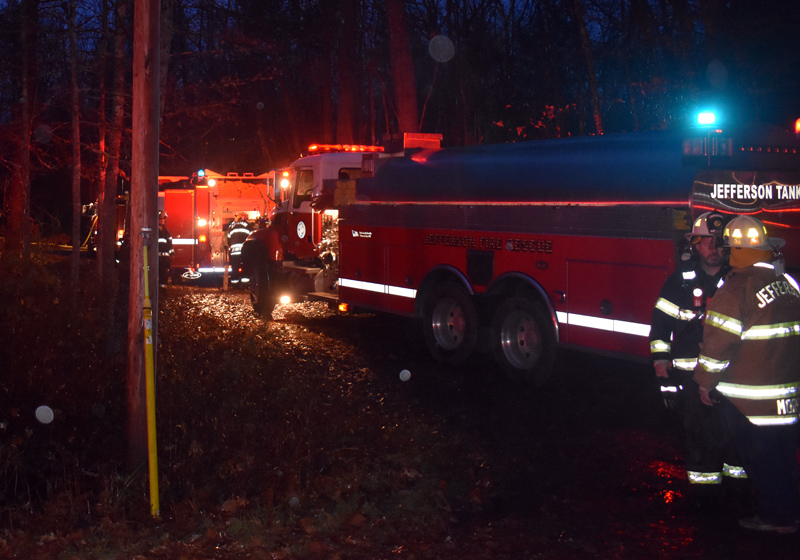 Firefighters respond to a trailer fire in Jefferson on Thursday, Nov. 7. There were no injuries as a result of the fire, according to Jefferson’s fire chief. (Alexander Violo photo)

The Maine State Fire Marshal’s Office is investigating and needs to speak with the tenant before it makes a determination about the cause of the fire.

“They talked to the owner and went through and didn’t see anything out of the ordinary or overly suspicious. They’re trying to talk to the occupant, to see if he left anything on or discarded any cigarettes,” Morris said.

A firefighter’s foot went through the wooden floor during the fire. At the time, it was not clear if it was related to fire damage, but the Fire Marshal’s Office indicated it was a result of the floor’s condition prior to the fire.

Morris said Engine 2, from Jefferson Fire and Rescue’s south station, was the first truck on scene.

A Somerville truck set up at Clary Lake to provide a water supply if needed. Sennett Road runs along the north shore of Clary Lake, between Mills Road and North Clary Road.

“It was a quick response and good mutual aid that made it work today,” Morris said.